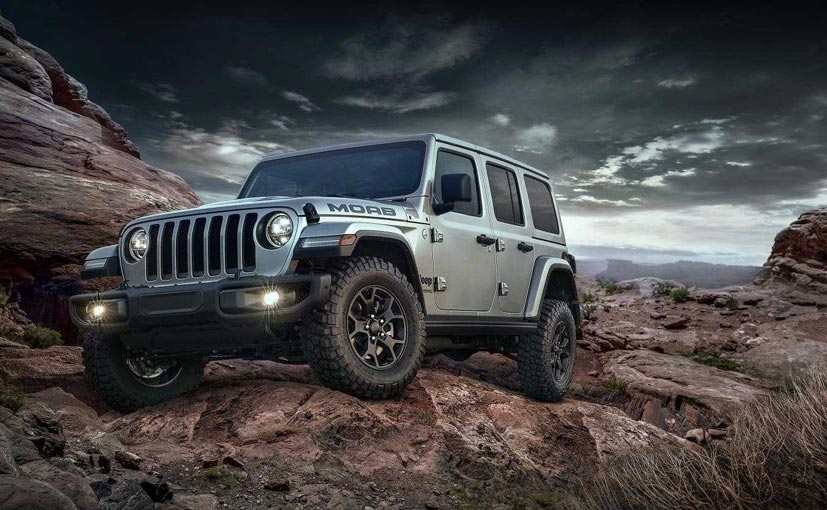 American automaker, Jeep will launch the fourth generation Wrangler SUV in India later today. The hardcore off-roader enjoys a legendary status in the 4x4 segment and the new generation version improves the SUV in many ways including comfort, technology and off-road prowess. The new gen Jeep Wrangler offering will be coming to India as a Completely Built Unit (CBU) and is likely to be offered in both two-door and four-door variants. The more interesting bit is likely to be the availability of the Rubicon variant with the Moab exterior package on offer.

The new generation Jeep Wrangler gets a host of visual upgrades including the traditional seven slat grille with the circular headlamps and LED DRL strips on either side. The SUV gets new LED taillights and a tailgate mounted spare tyre, while retaining the butch and boxy appearance. The cabin also gets a host of changes including the new 8.4-inch touchscreen infotainment system, 7-inch TFT LED display, tilt and telescopic adjustable steering wheel, TPMS and a push-button start.

The new generation Jeep Wrangler comes with four engines globally. There's the 2.0-litre, four-cylinder petrol with 270 bhp and 400 Nm of peak torque; a 3.6-litre V6 petrol unit churning out 285 bhp and 353 Nm of torque; a 2.2-litre four-cylinder diesel unit producing 197 bhp and 450 Nm of torque and a 3.0-litre V6 diesel unit belting out 240 bhp and 570 Nm of torque. For India though, Jeep is likely to put focus on the petrol options initially. Transmission options include a 6-speed manual and an 8-speed auto, with the latter likely to come to India first.

The new generation Jeep Wrangler does not have a direct rival in India but for a price tag around ₹ 60-65 lakh (ex-showroom), it will take on the Land Rover Discovery Sport and a host of other rather tame SUVs. 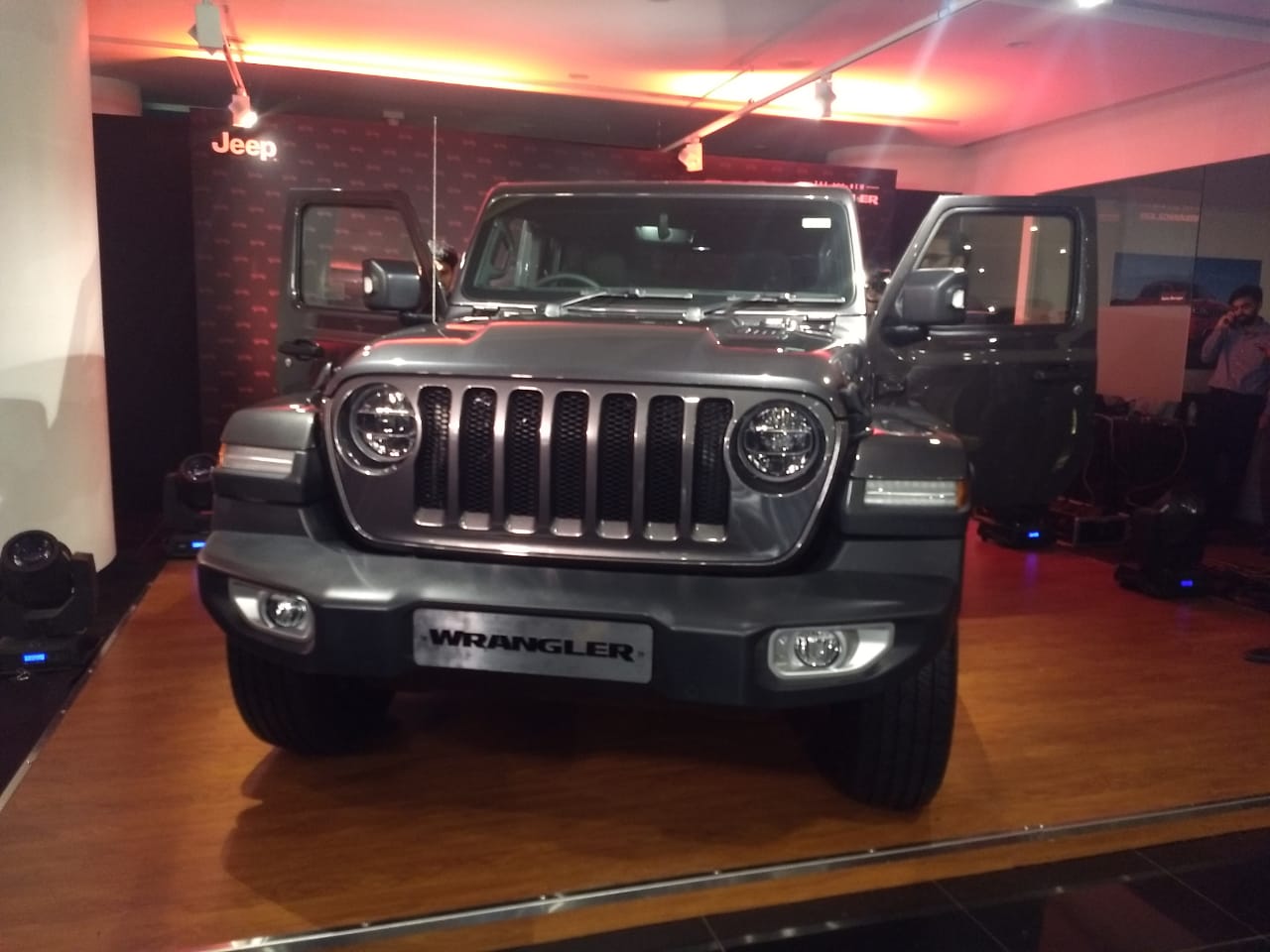 The SUV is equipped with the Jeep SelecTrac 4WD system that can be engaged full time in 4H. The system analyses the grip that every wheel encounters and sends extra torque to those wheels that need more traction.

The Wrangler continues to get an impressive crawl ratio of 2.72:1 when engaged in 4L (low) mode. 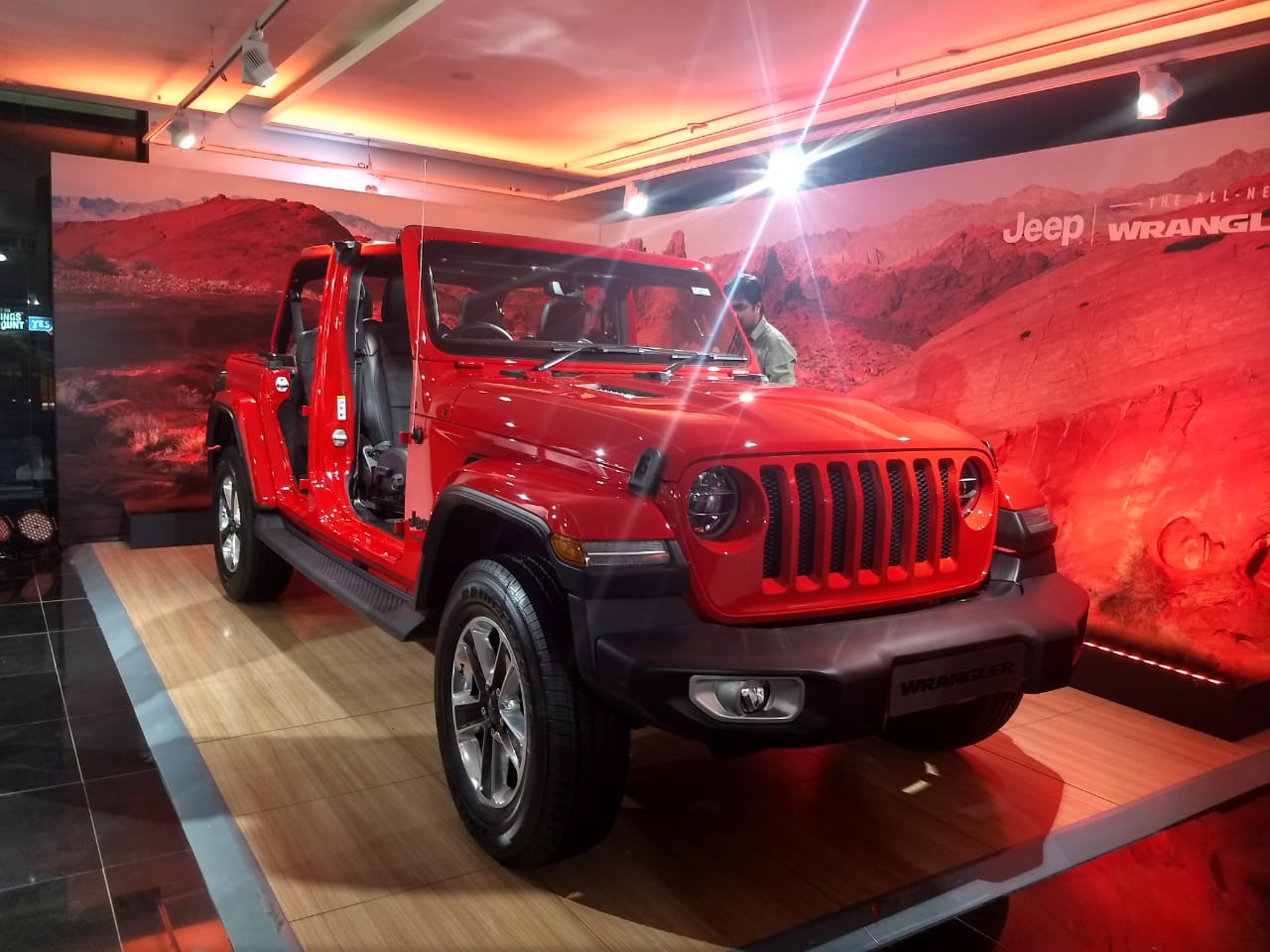 07:21 PM
New Generation Jeep Wrangler Launch - Prices
The all-new Jeep Wrangler Unlimited 5-door has been launched in India priced at Rs. 63.94 lakh (ex-showroom).
The SUV will go on sale via the brand's 10 Jeep Destination Stores across the country. 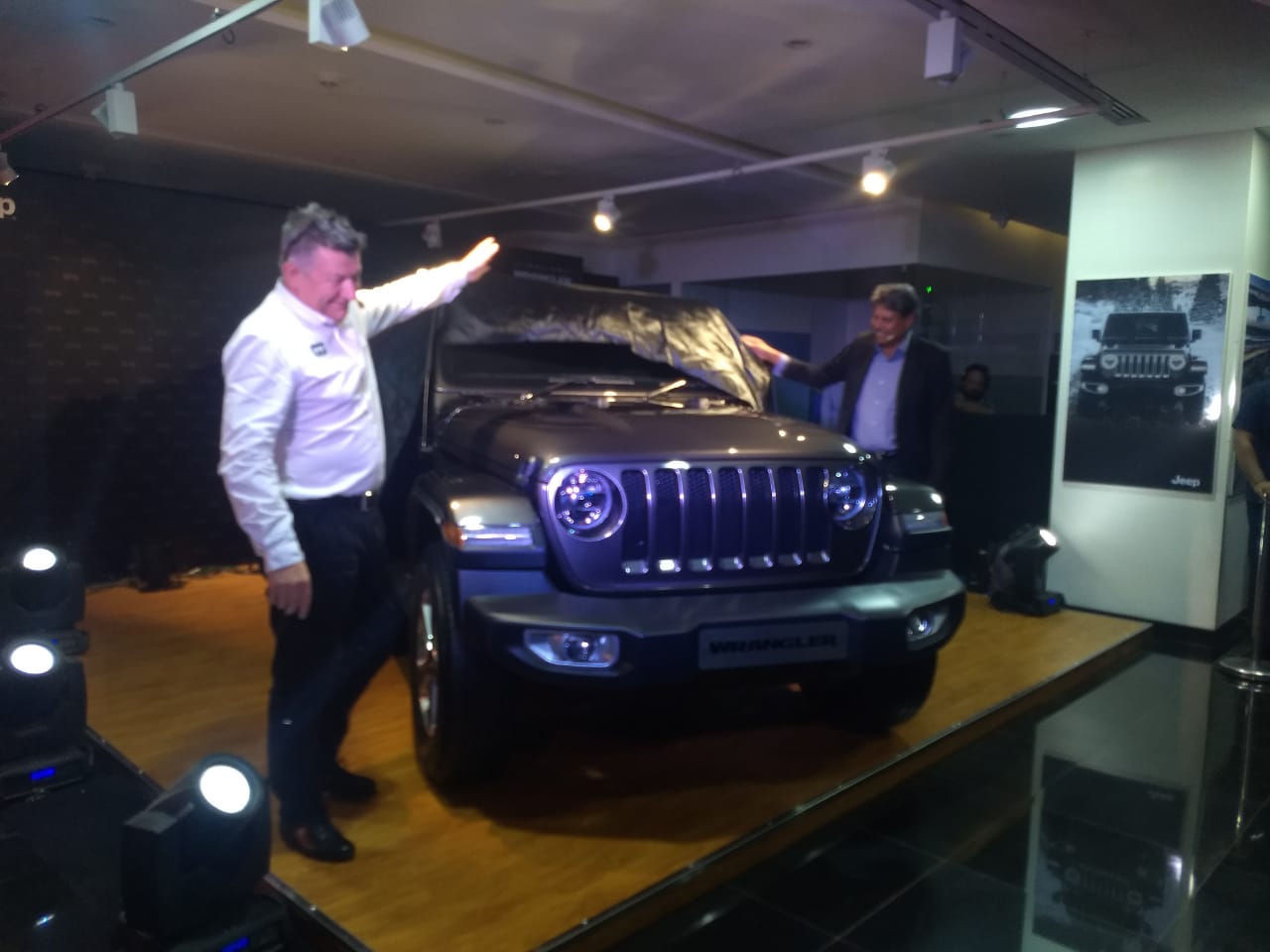 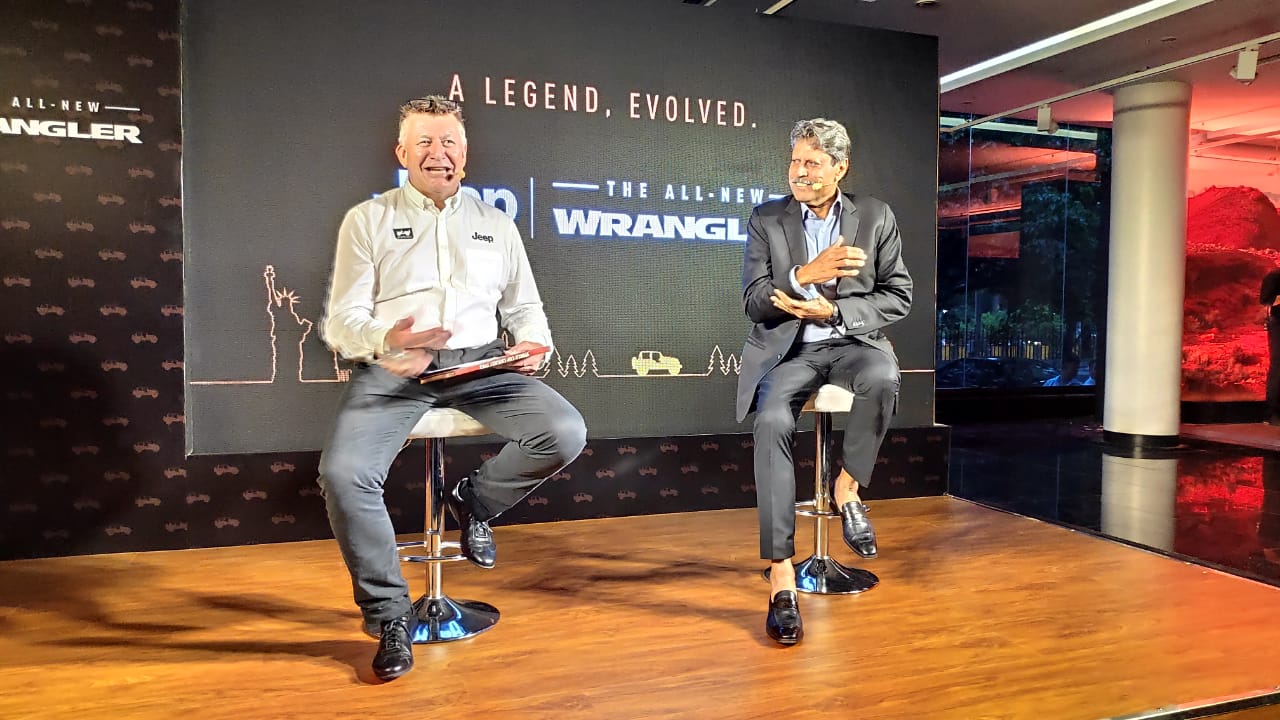 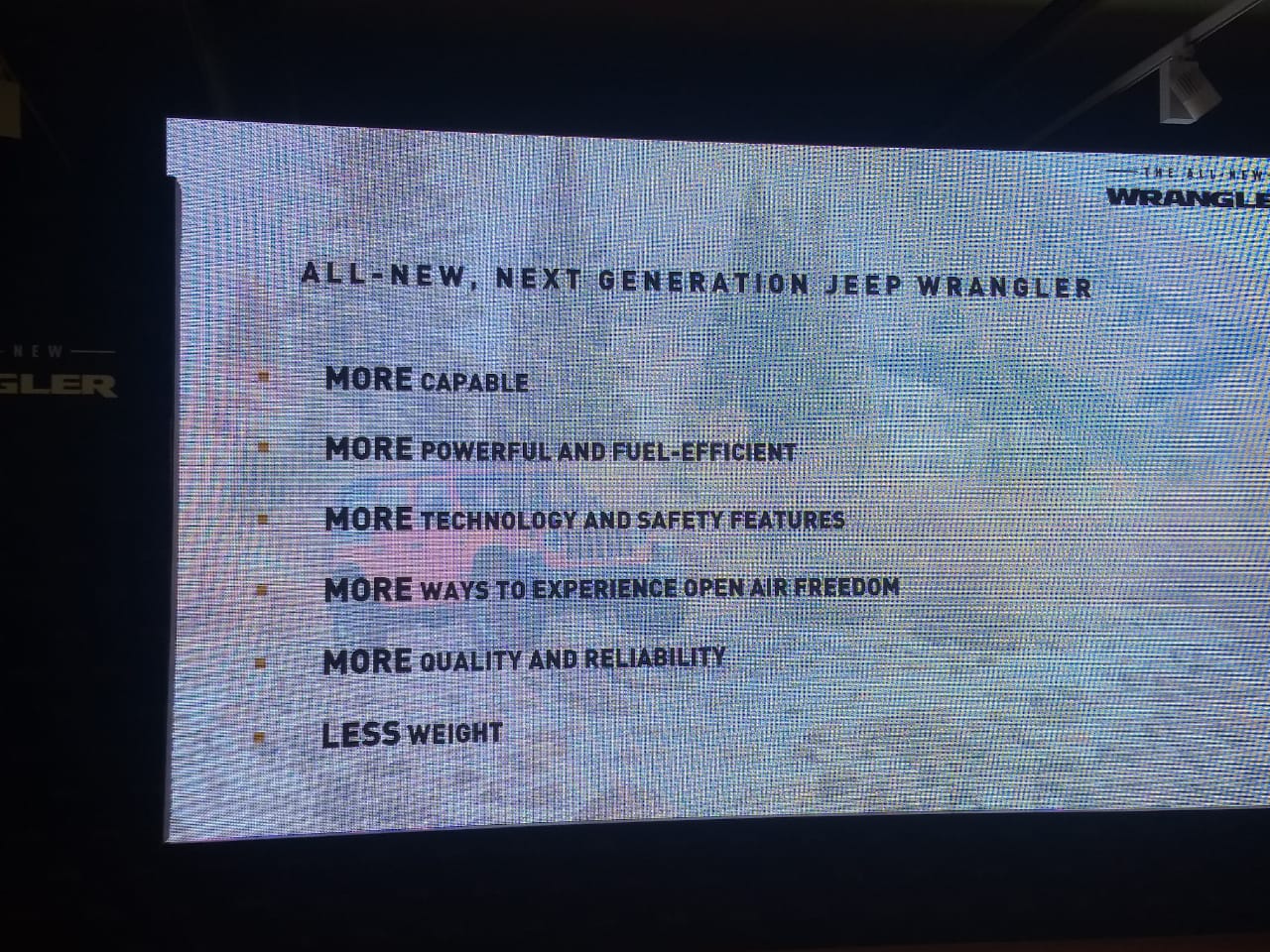 07:08 PM
New Generation Jeep Wrangler Launch - Features
There are a number of modern touches too including the circular headlamps with the LED DRLs, while there are additional DRLs integrated in the front fenders along with the turn indicators.
The taillights also get the LED treatment with distinctive lighting that stands out. 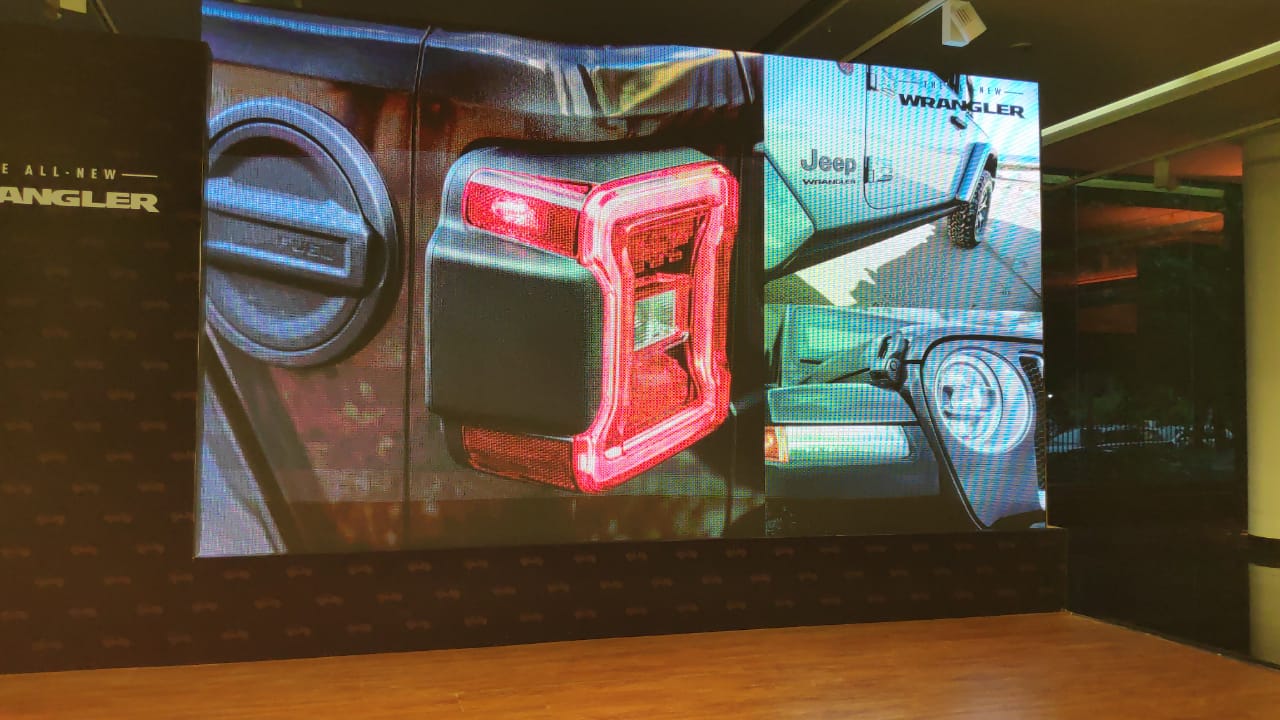 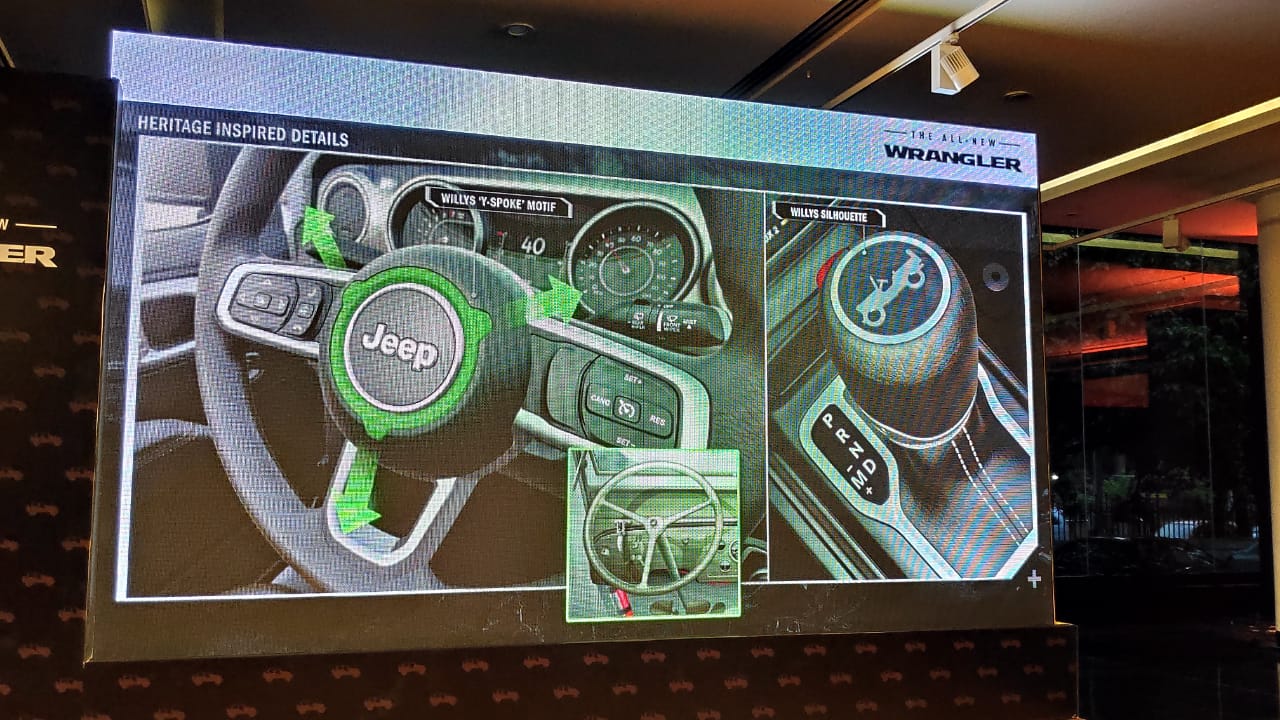 07:04 PM
New Generation Jeep Wrangler Launch - Interior
It's a brand new cabin too on the Jeep Wrangler that gets covered in premium materials.
While the T-shaped layout has been retained for the dashboard, it still gets a host of modern updates including four round air vents, an instrument panel with a colour digital screen between the twin pods, and a multimedia screen in the centre above the console which houses controls for the air conditioning, window switches and off-road driving mode selector. 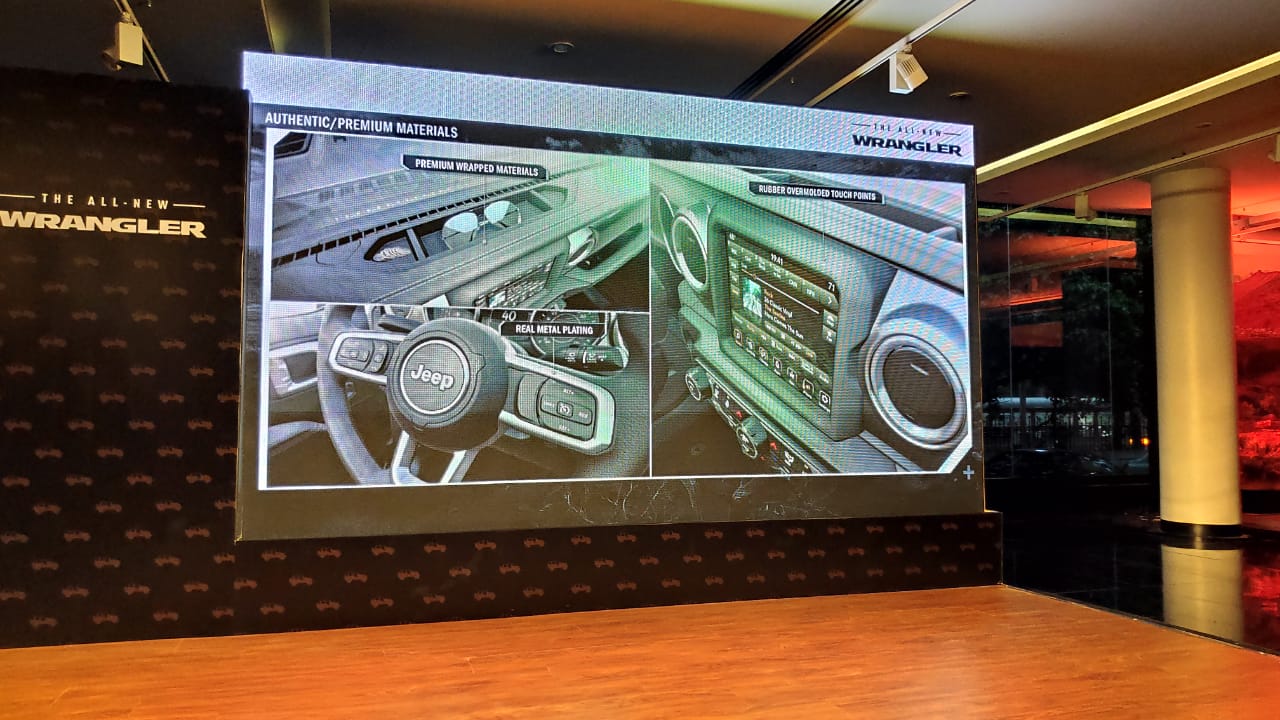 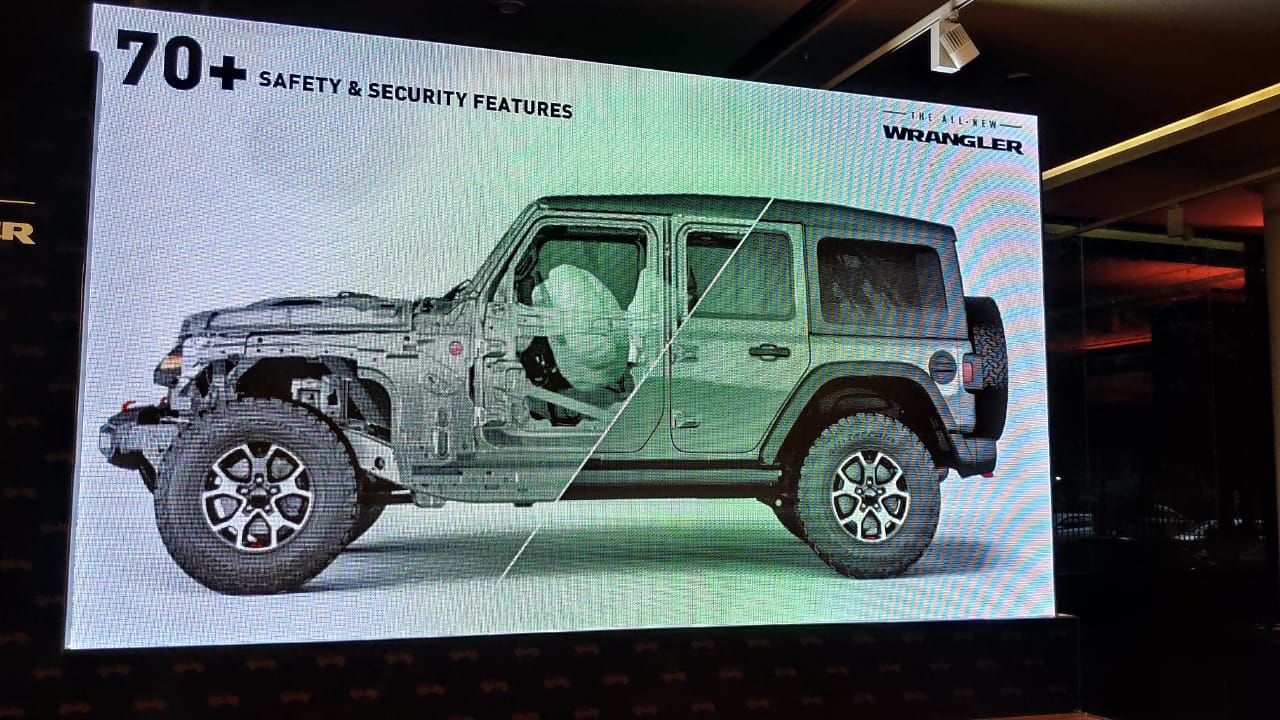 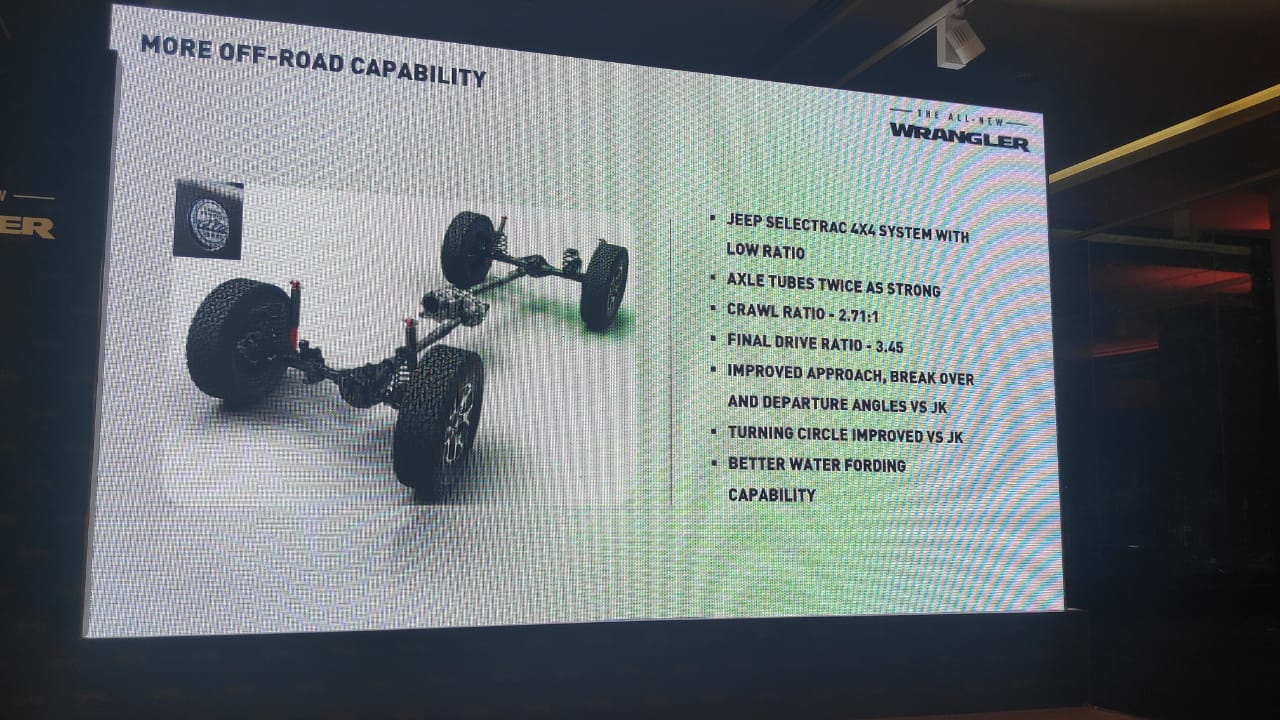 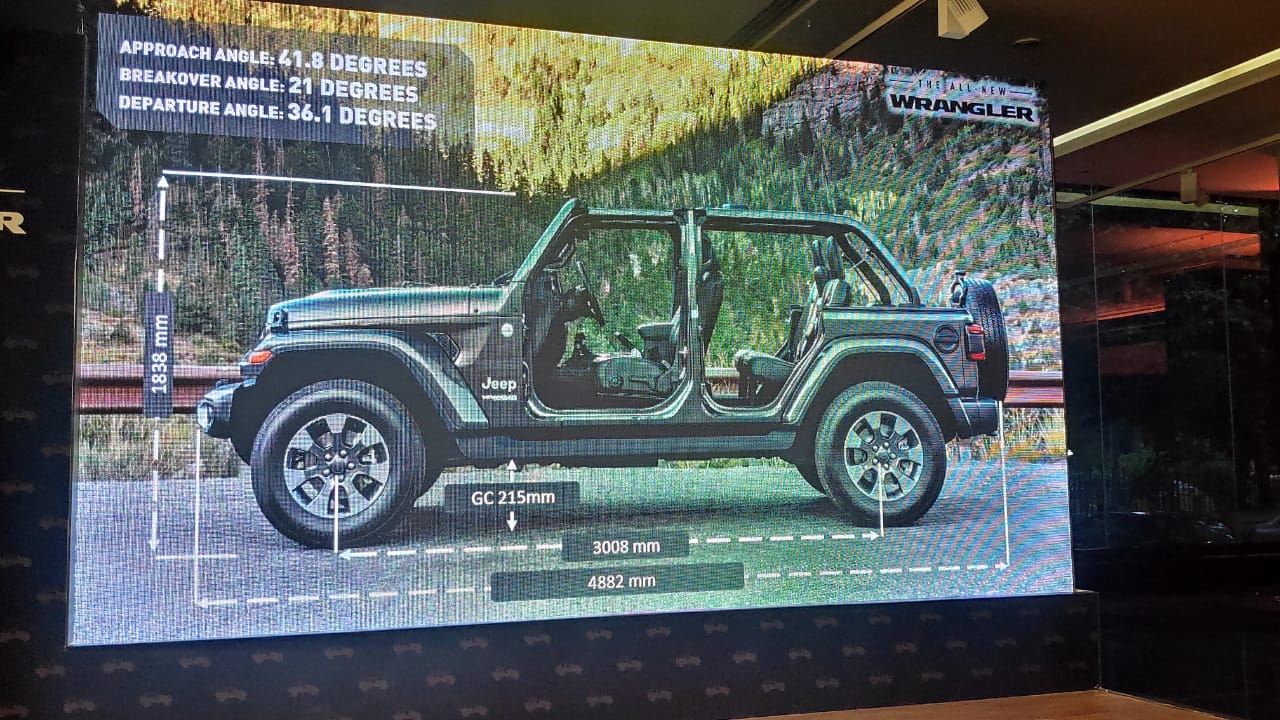 06:58 PM
New Generation Jeep Wrangler Launch - Engine
The Jeep Wrangler will be offered only with the 2.0-litre turbocharged petrol version in India.
The motor belts out 264 bhp and 400 Nm of peak torque.
The engine is paired with an 8-speed automatic transmission for India, which was newly developed alongside the new Wrangler. 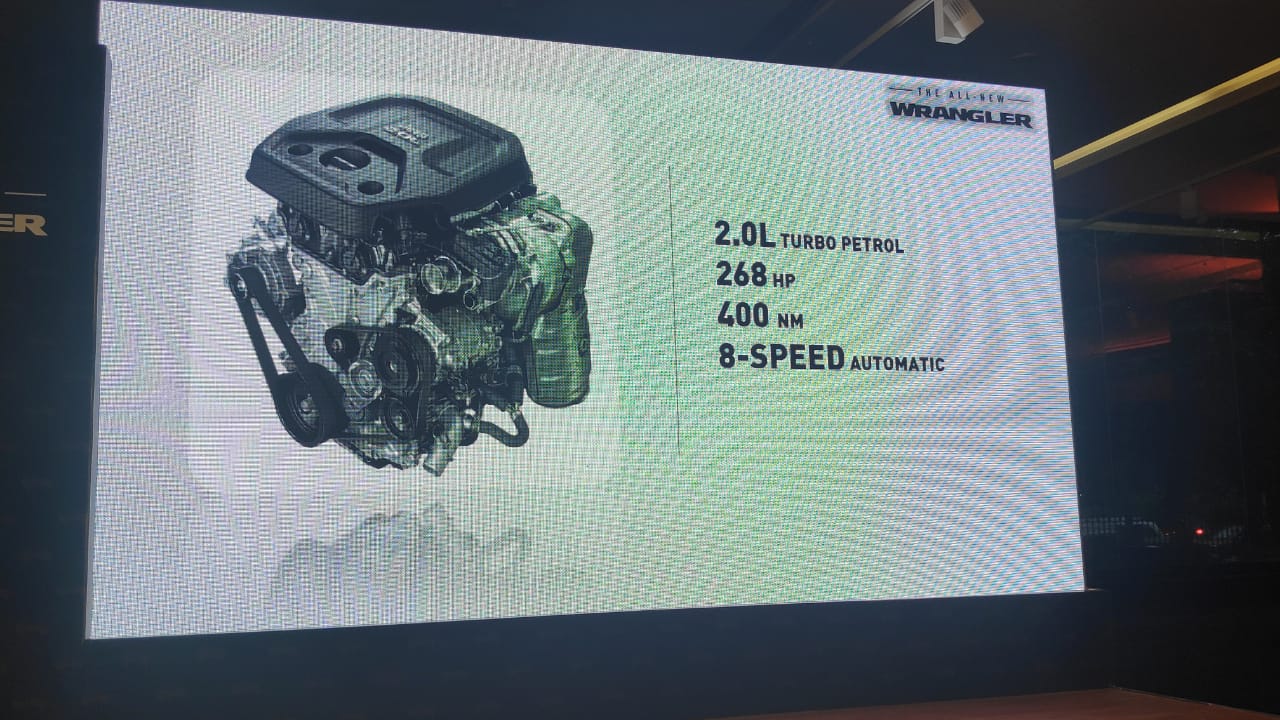 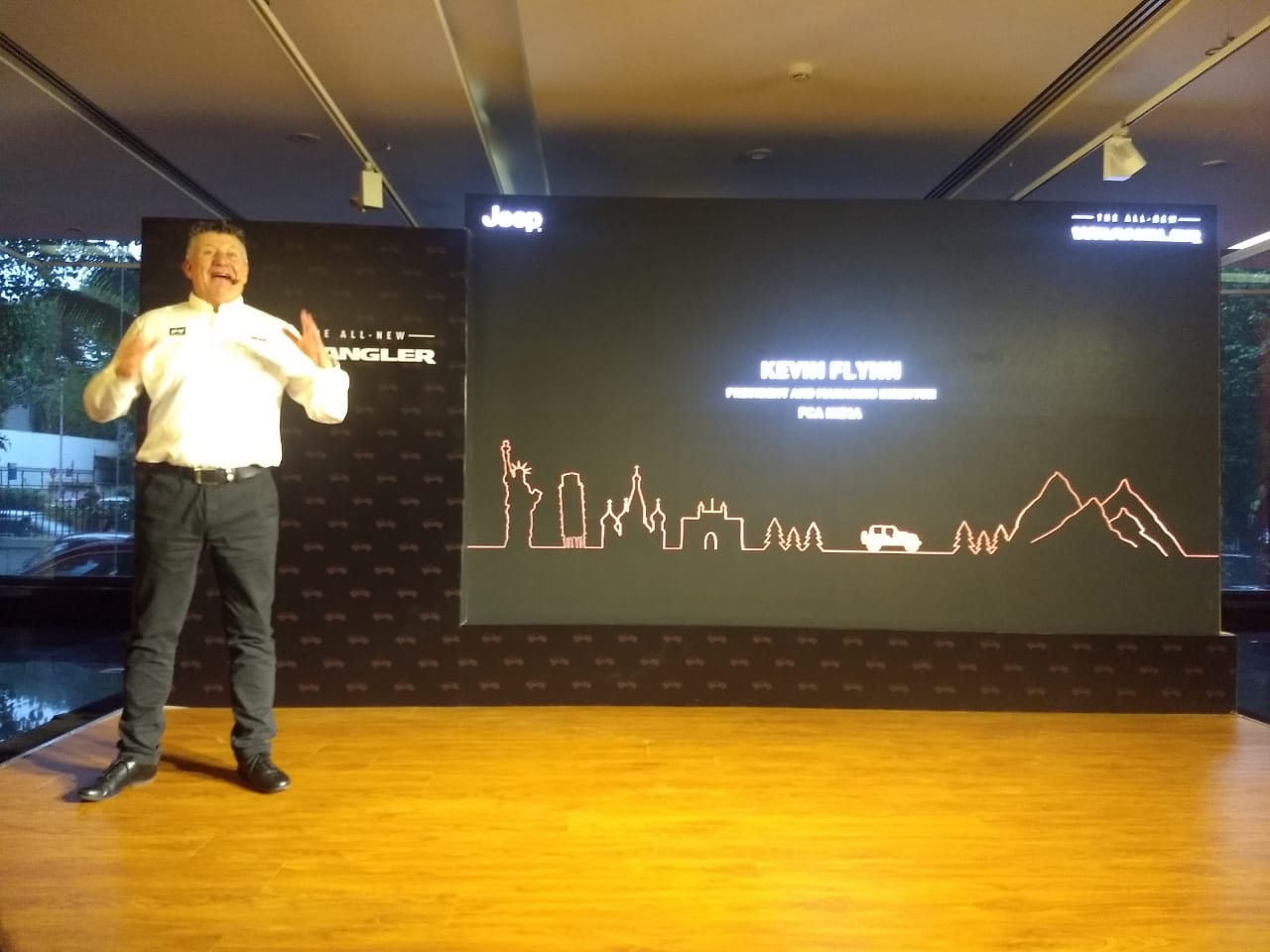 06:49 PM
New Generation Jeep Wrangler Launch - New Design
At the rear, the license plate holder sits on the bumper in order to accommodate the spare tyre, which has been lowered to enhance rearward visibility.

An integrated spoiler combined with rounded roof edges helps air pass over the vehicle. The rear wiper has also been relocated to the bottom of the glass in a bid to improve visibility.
The taillamps get the LED treatment and distinct styling too on the new Jeep Wrangler. 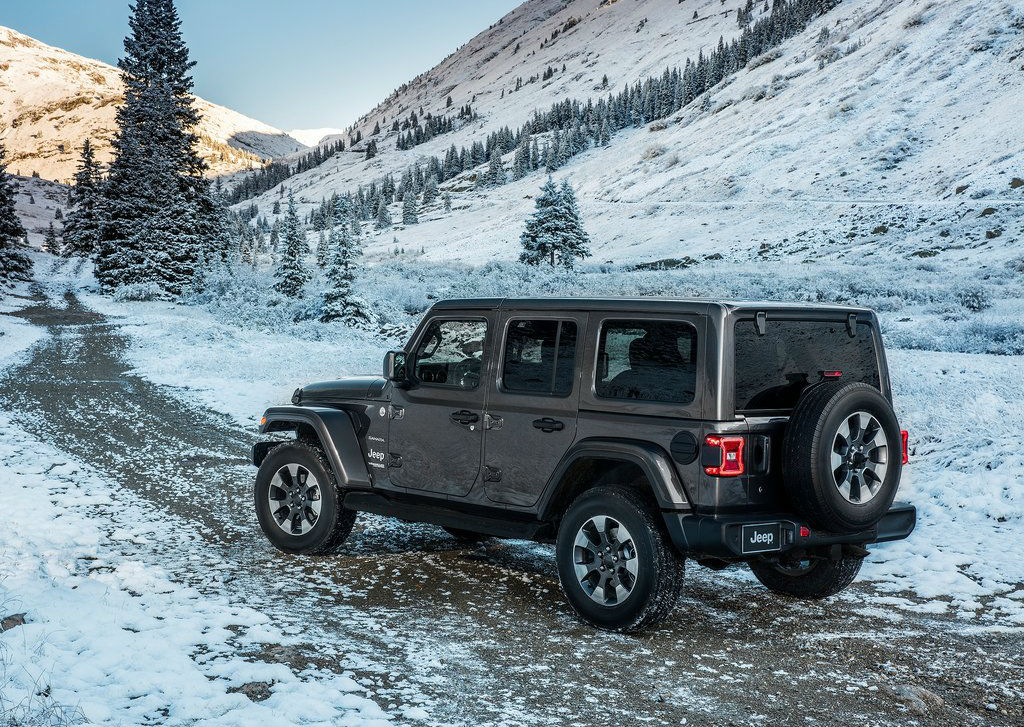 06:47 PM
New Generation Jeep Wrangler Launch
Another big update on the new Jeep Wrangler are the  lightweight, high-strength aluminium doors that are easy to remove and install. The process is further eased thanks to the exposed hinges. 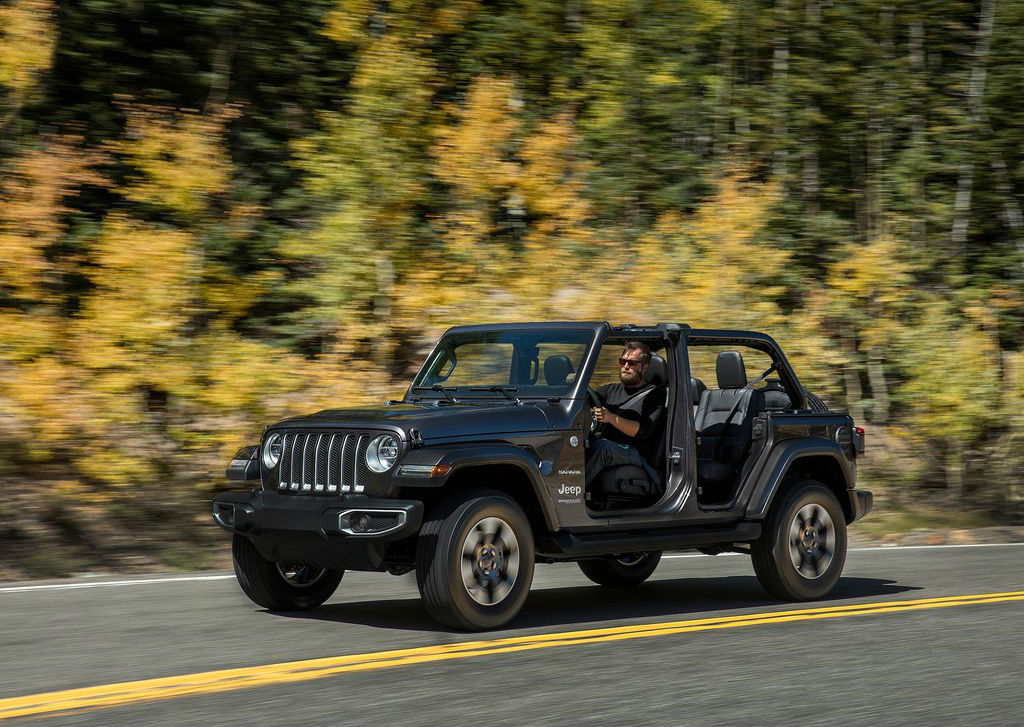 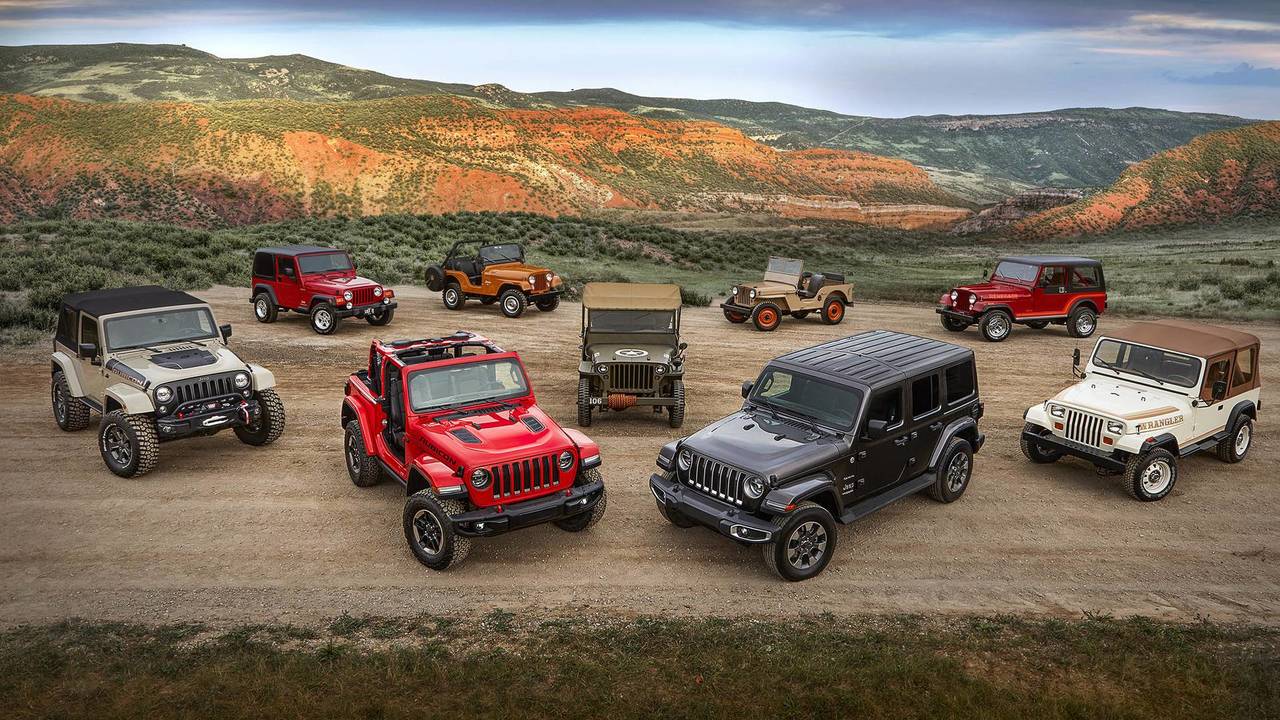 06:33 PM
This 1942 Willys Jeep is the grand daddy of today's Jeep Wrangler.
The off-roader was powered by an in-line four-cylinder Willys L134 'Go Devil' engine that made a maximum of about 60 horses back in the day. 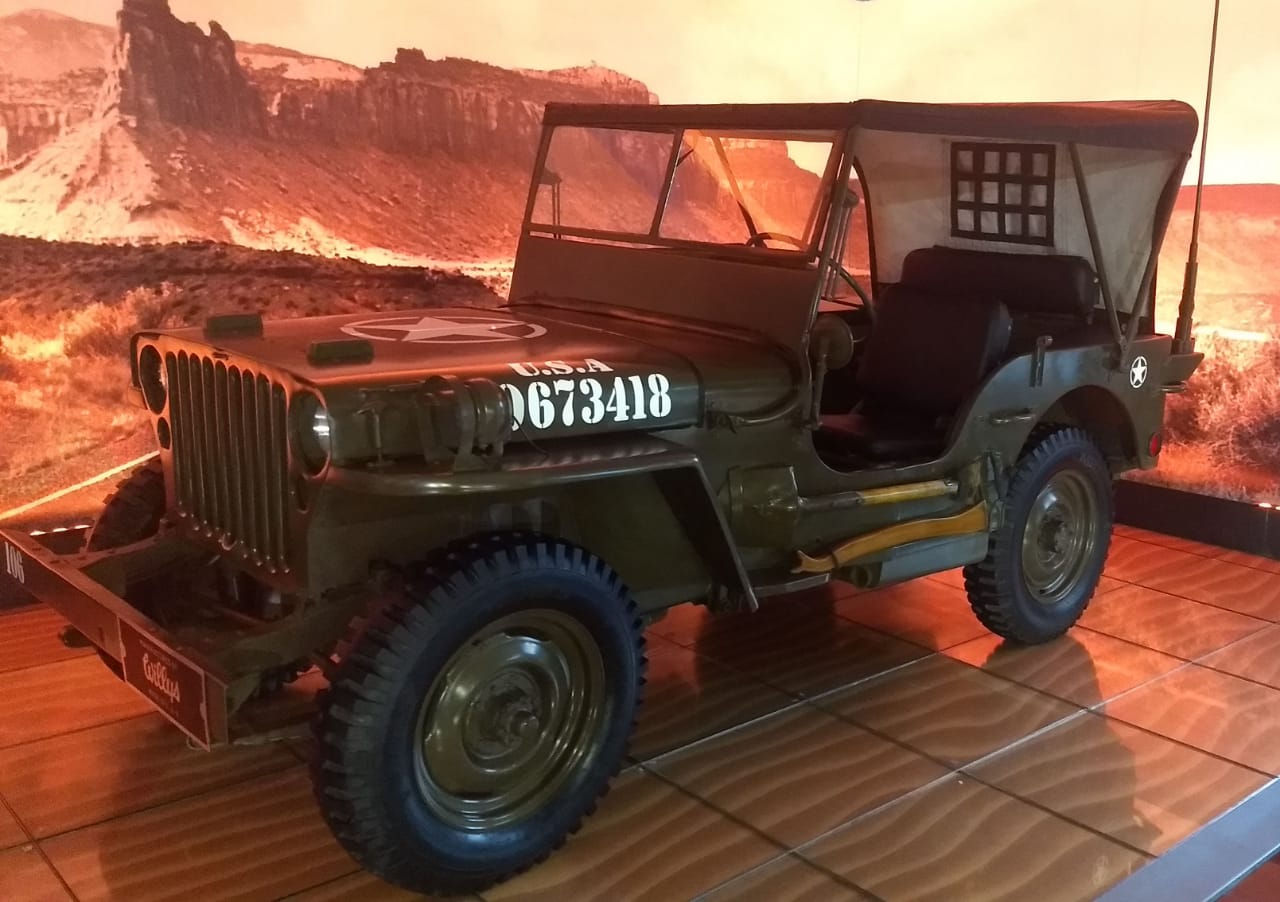 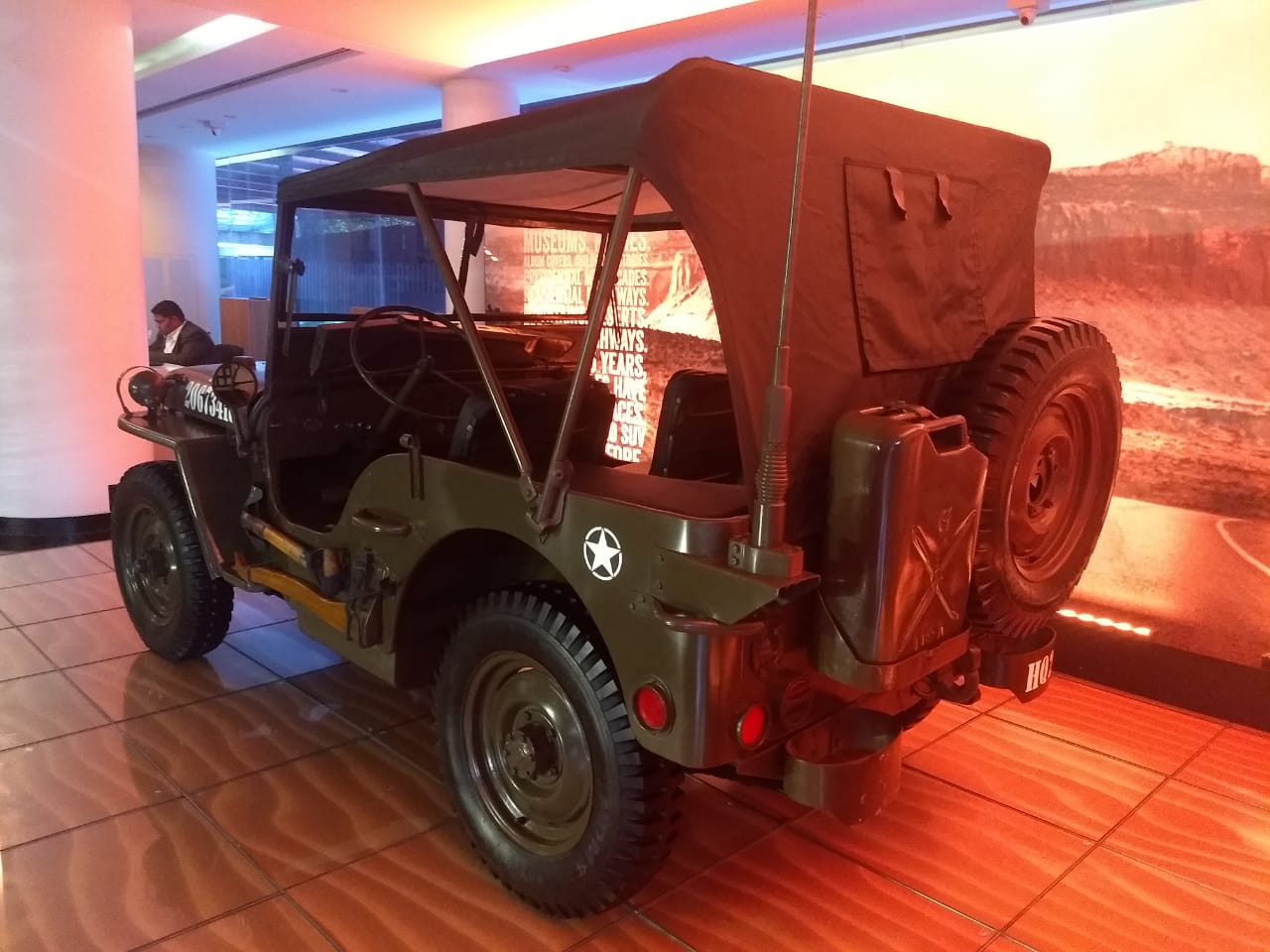 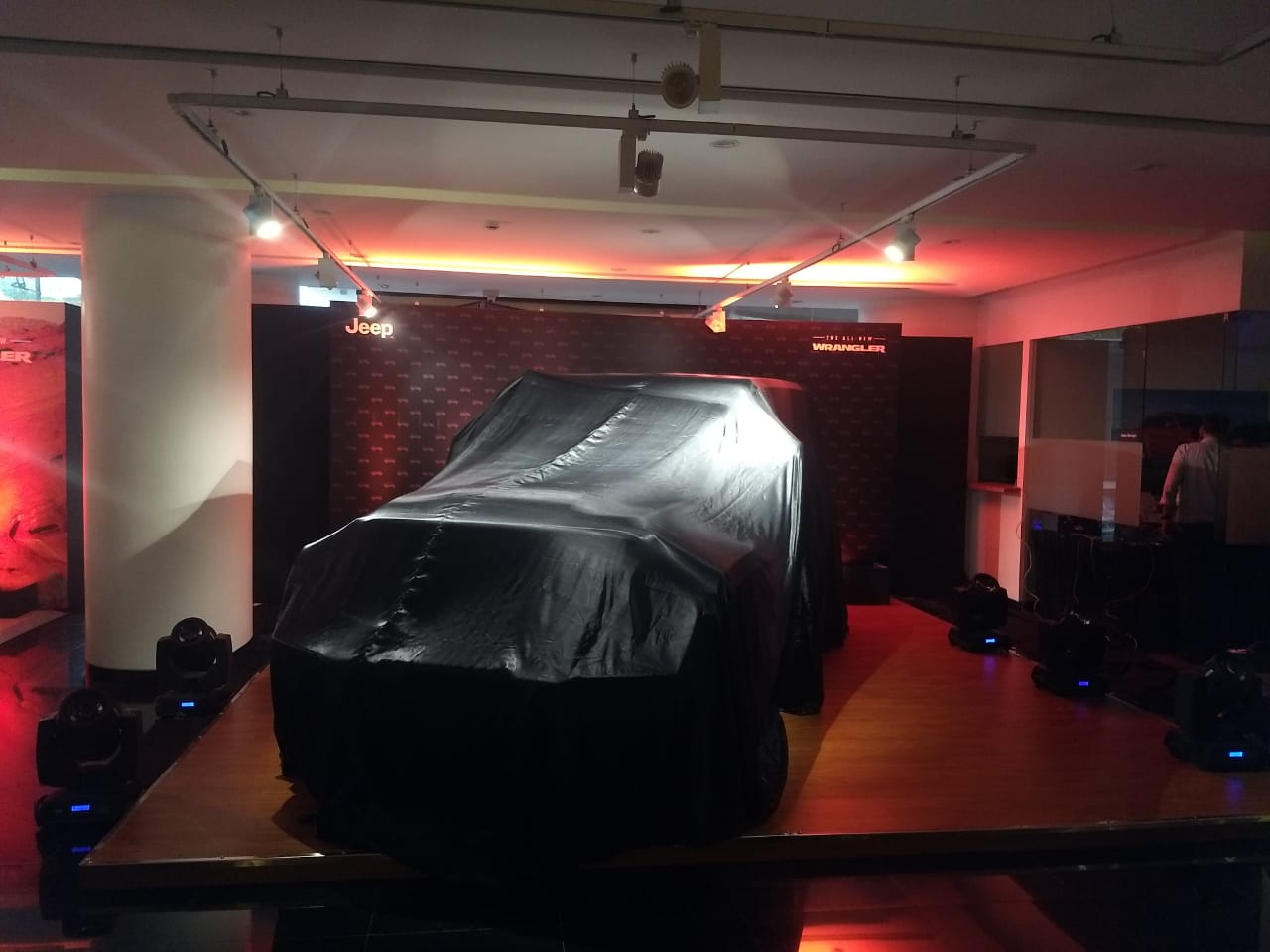 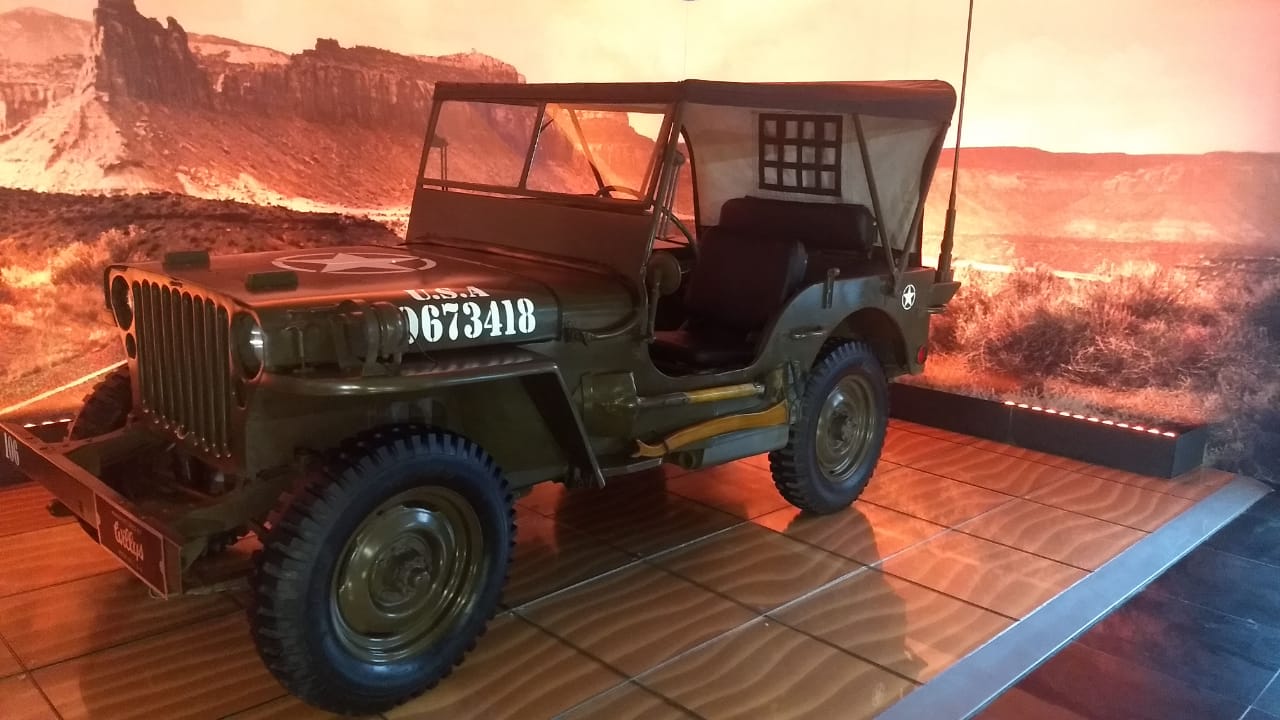 06:26 PM
New Generation Jeep Wrangler Launch
A gentle reminder as to what the Jeep SUVs are capable of. 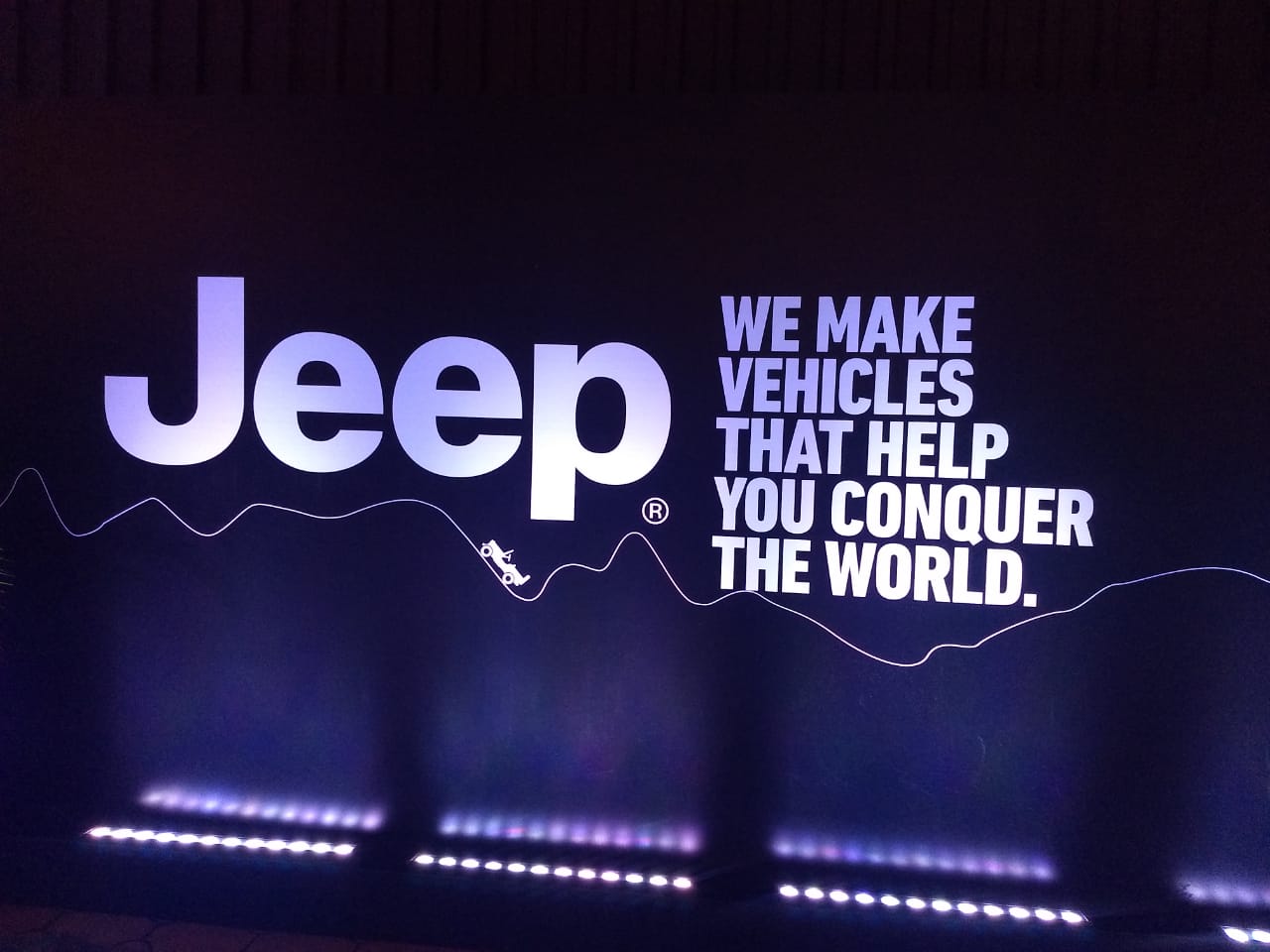 06:23 PM
New Generation Jeep Wrangler Launch - History
Here's a reminder of Jeep's legendary history as a brand that date backs to 1941 with the Willys. 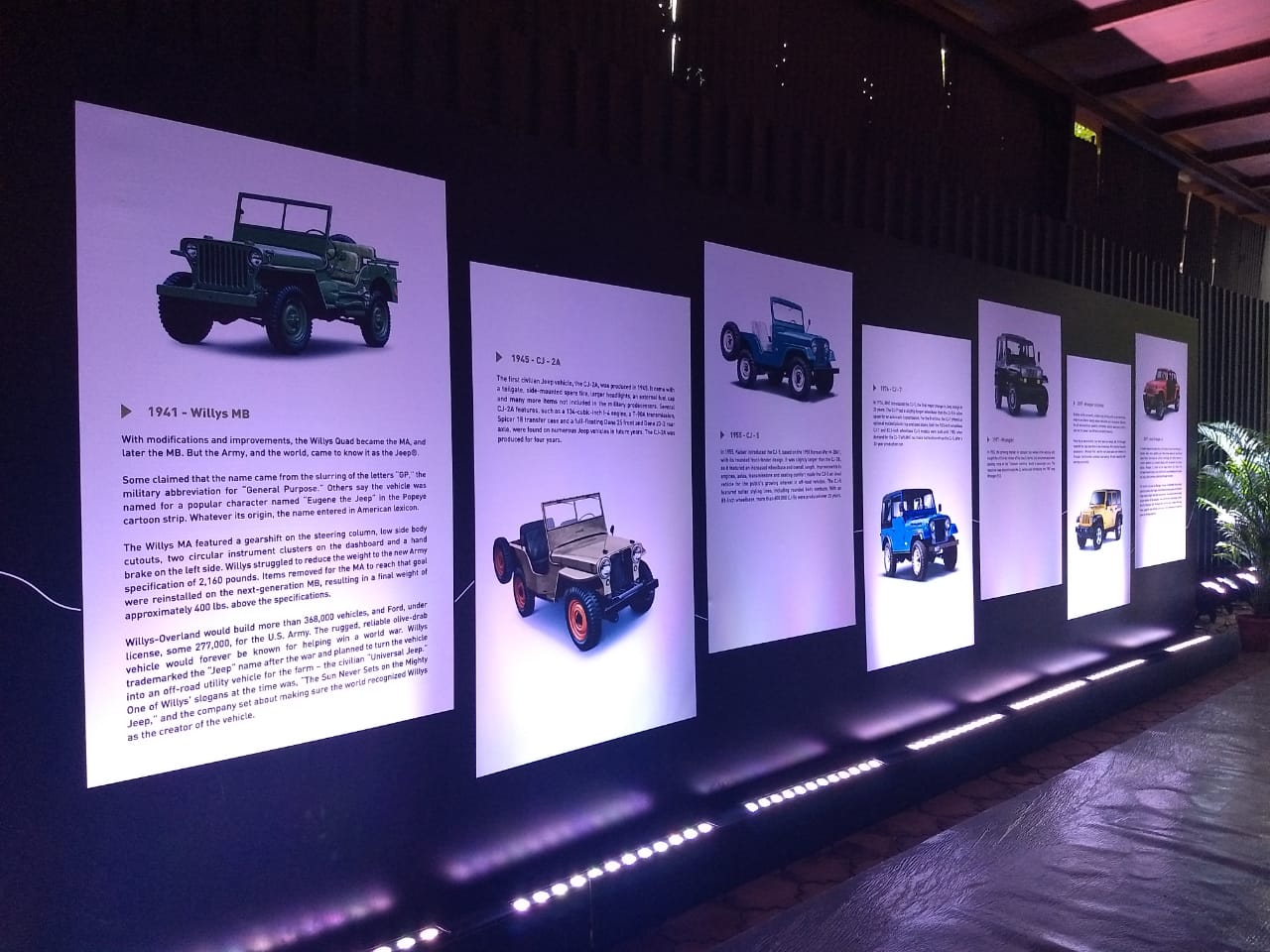 06:20 PM
New Generation Jeep Wrangler Launch - New Design
The windshield too is shorter in height in a bid to improve aerodynamics and there's a new beltline that starts at the ORVMs and runs along the side of the windows.
There are traditional elements that continue including the exposed door hinges, mechanical door lock and chunky plastic handles.
Another big change on the windshield is that it can be folded with ease on the three-door version. The windshield unit is now separate from the A-pillars, which makes it far more convenient to fold, as opposed to the one on the predecessor. 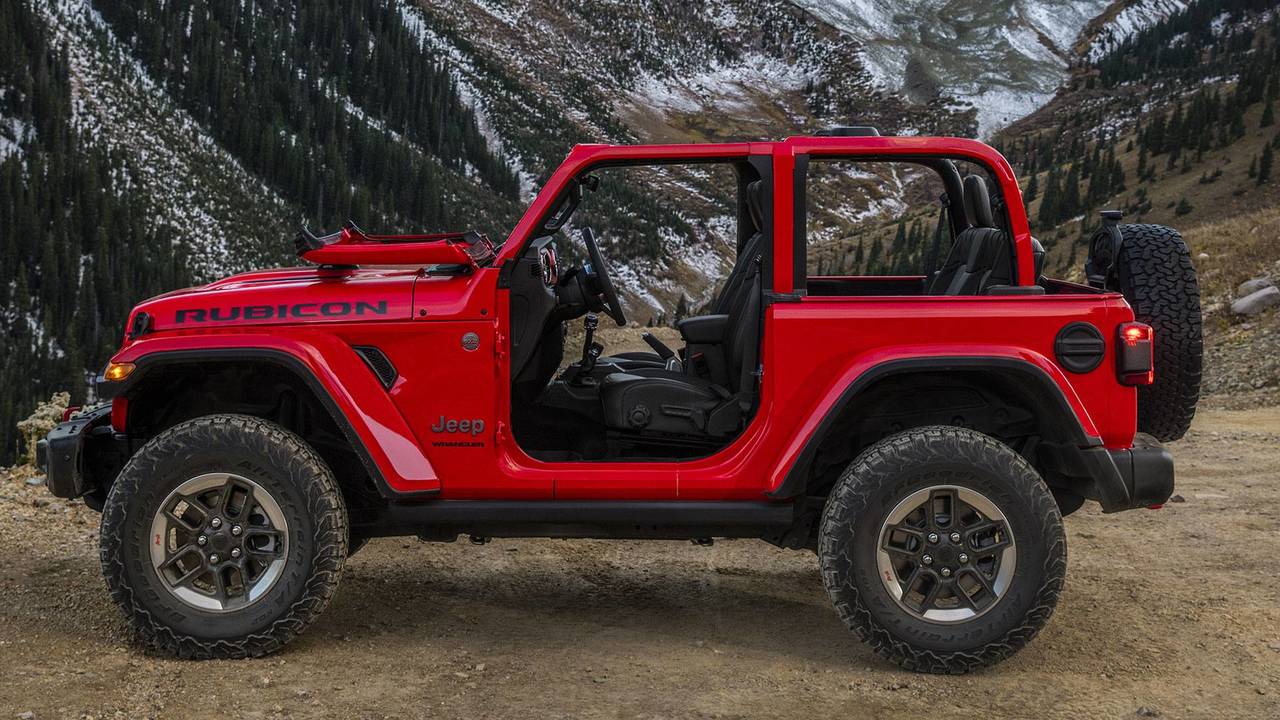 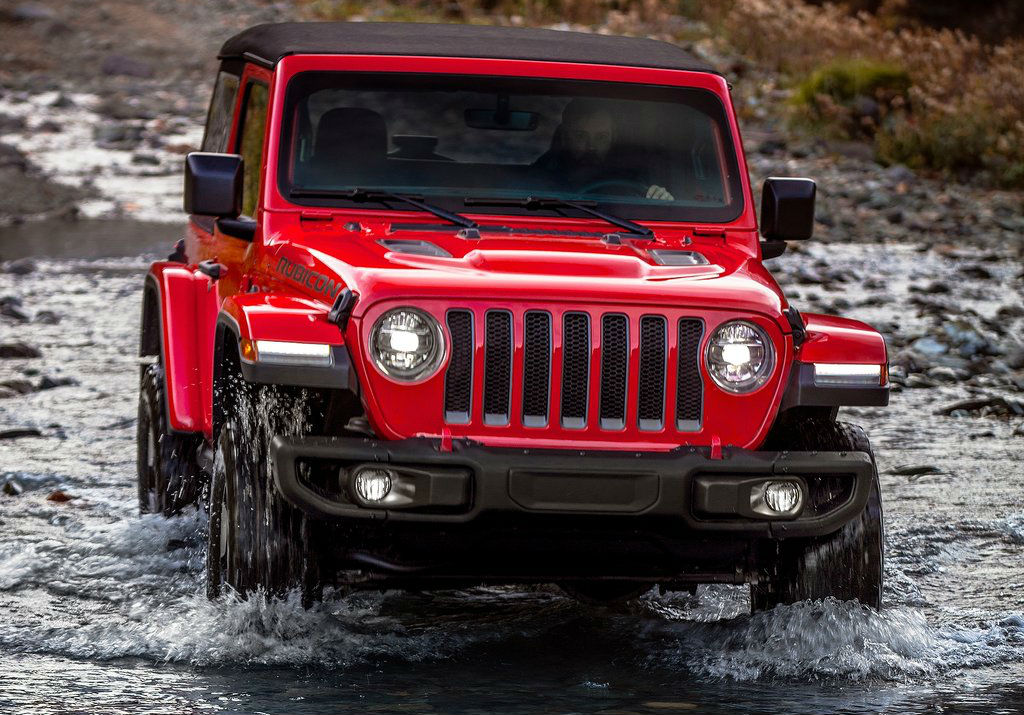 05:25 PM
New Generation Jeep Wrangler Launch - New Design
The new generation Jeep Wrangler may not look dramatically different from its predecessor and that's great for the iconic design language. It certainly looks modern with a host of carefully tweaked styling changes.
Key design traits on the new Wrangler remain the same including the seven slat grille that now bend inwards to accommodate the big and circular headlamps. These units too get a new look that integrate circular LED DRLs, in addition to the horizontal daytime running lights that have been mounted on the front fenders, just below the turn signals.
The overall front too is more upright on the new version with a sculpted bonnet that adds to the imposing look that the Wrangler commands on road. 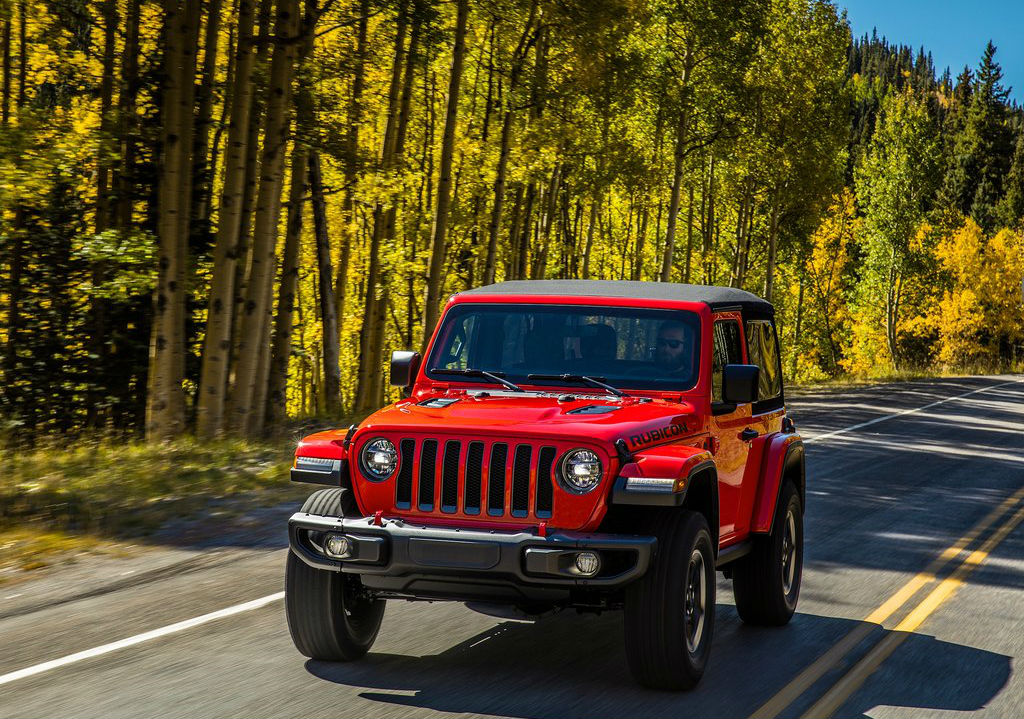 05:05 PM
Hello and welcome to the Launch Updates of the new generation Jeep Wrangler.
The all-new SUV made its global debut in 2017 and comes with a history of ruling the roads that have no tarmac.
The Jeep Wrangler was one of the first offerings when the brand made its way to India in 2016, and the all-new version brings more functionality, features, comfort and off-road prowess over its predecessor.
The new generation Jeep Wrangler will be launched later today and that's when we will receive all the details on the pricing, availability and specifications for India.
We are at the launch event, so stay tuned to this space for all the updated, LIVE! 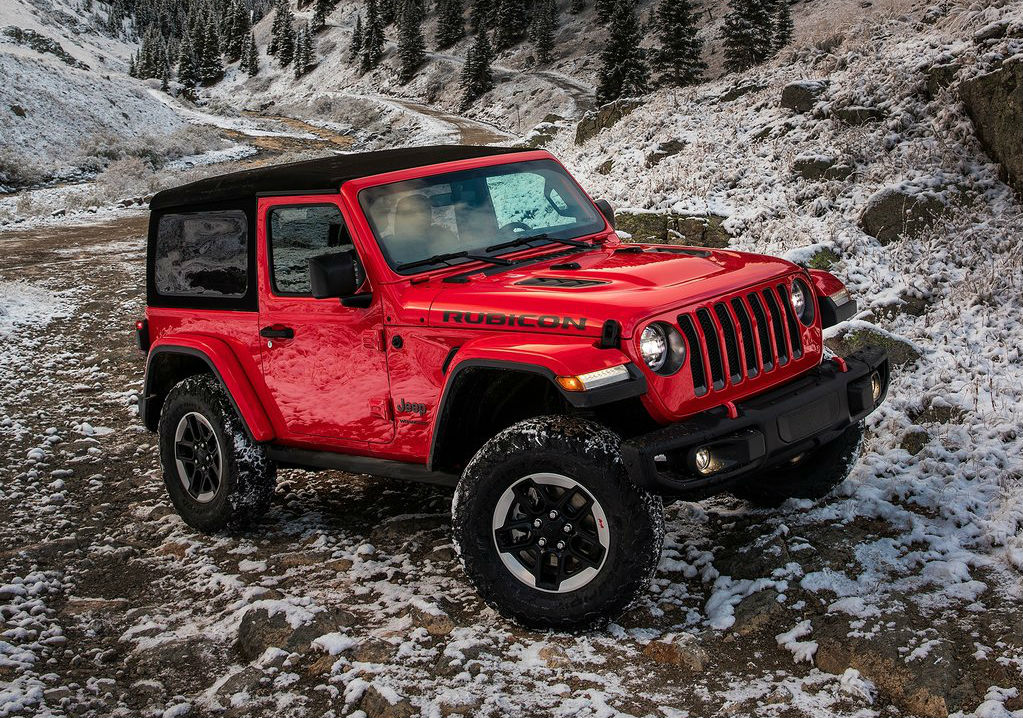