Next-Gen BMW 3-Series To Be Unveiled Next Month

Based on the CLAR platform, the new 3-Series will be more rigid and will get an advance steering and damping system. 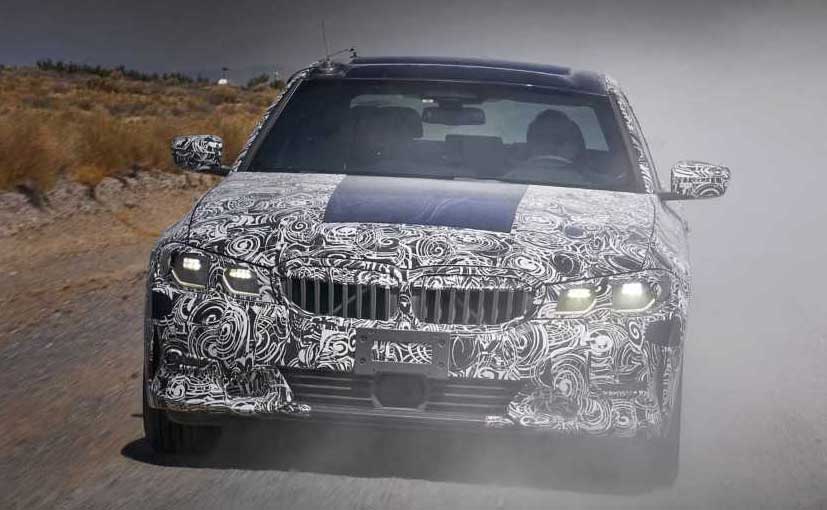 The seventh-generation BMW 3-Series is all set to make its global debut on October 2, 2018 at the upcoming 2018 Paris Motor Show. Though BMW has not revealed any other details about the car and the iteration it will showcase, referring to previous spy pictures, it's highly anticipated to be the M 340i. It's is the top-spec M-Sport variant that most likely will be powered by a 3-litre, 6 cylinder turbocharged petrol engine that will produce over 350 horses and 500Nm of peak torque. The engine will be married to an eight-speed automatic gearbox and the 3 Series will be a rear-wheel drive as standard; while there will also be the xDrive (four-wheel drive) available as an option. Also optional will be the limited slip differential on this car that will provide extra traction.

Being the entry level sedan the 3 Series introduces many first time luxury car buyers to the BMW family who are conscious about their running cost. Hence, in a bid to reduce its drag-coefficient so to improve agility and fuel economy, BMW has been working on the aero-dynamics of the car. The next-gen 3-Series is based on BMW's CLAR platform that has kept it on a strong diet and is lighter it by 55 kgs. The CLAR is a cluster architecture developed using several light weight elements that ensures composite rigidity to the structure.

Additionally, the M 340i will have a wider track than the lower variants and will come equipped with M suspensions as standard. The M suspension will lower the body by 10mm and will be coupled with a new lift- dampening system that will debut on the BMW 3-Series. This arrangement controls the vibration and thud a firm tuned suspension make while going over sharp bumps and at the same time maintaining the corner agility. Moreover, the new platform has helped maintaining a 50:50 weight distribution. Saved for the last, the good news for all BMW fanatics is that the M 340i will get an even precise steering system and massive 18-inch alloys.

We are still not sure though, if BMW will bring the M 340i in India in its pure state which will go on sale in the European market. That said, considering the fact that Mercedes has already launched the 2018 C-Class facelift in the C 300d AMG-Line variant, a similar positioning from BMW could make the rivalry a bit more intense.