The Polarity Smart Bikes range are intended for intra-city use and come with pedal assistance ensuring there's no range anxiety. The e-bikes offer a range of 80 km on a full charge, and a top-speed of up to 100 kmph. Pune-based Polarity Smart Bikes has unveiled its new range of electric bikes. The start-up has introduced its offerings across two categories - Sport and Executive. This includes the S1K, S2K, and the S3K, as well as the E1K, E2K and the E3K in the brand's product portfolio, and are priced at ₹ 38,000 to ₹ 1.10 lakh. The electric bikes are aimed to offer last mile connectivity in the city, all of which is emissions free. The Polarity bikes are powered by an electric motor with pedal assistance that ensures there's no range anxiety for the rider. Pre-bookings have opened for the smart bikes from today at a token amount of ₹ 1001.

Polarity says that the production capacity for the first year will be 15,000 units, and deliveries will begin in the first quarter of 2020. The company will also offer plug-in chargers, both a standard home charger and an optional fast chargers, ranging from a 40V 5A unit to a 80V 10A unit. Furthermore, it has also been announced that the State GST (2.5 per cent out of 5 per cent) will be waived off in Maharashtra for the first 70,000 units sold. 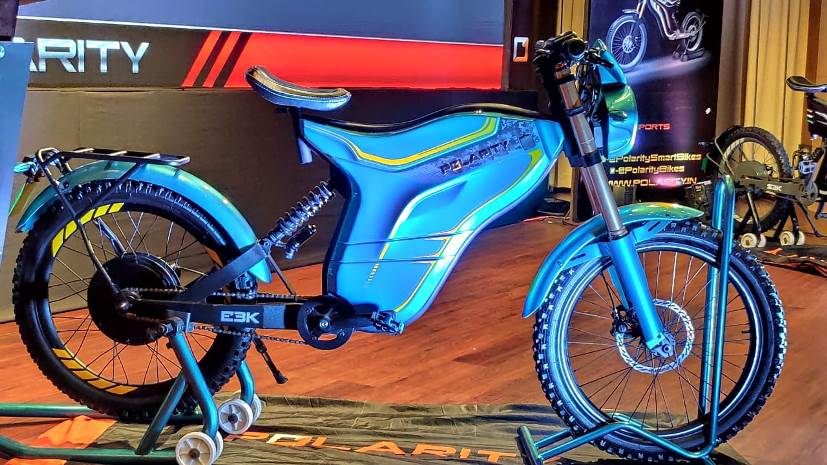 This Polarity E3K electric bike is priced at ₹ 1.05 lakh and comes with a top-speed of 80 kmph

All the Polarity Smart Bikes will offer a minimum range of up to 80 km on a single charge. While the entry-level E1K will come with a top-speed of 40 kmph, the range-topping S3K will be able to achieve a top speed of 100 kmph. The bikes are powered by a BLDC electric hub motors ranging between 1-3 kW, equipped with lithium-ion batteries. Polarity will also offer 3-years warranty on the battery, which comes with a minimum of 1000 charging cycle.

On the feature front, the Polarity bikes boast of heavy duty equipment including USD forks up front and a monoshock unit at the rear, large spoke wheels with knobby tyres, LED lights and an all-digital instrument console. The top-end E3K and S3K also get Bluetooth connectivity and GPS navigation system. The e-bikes are built on a lightweight steel frame and all the major electric components are housed within its body. The Polarity bikes do not have direct rivals but will take on a number of offerings including the e-cycles from Being Human.