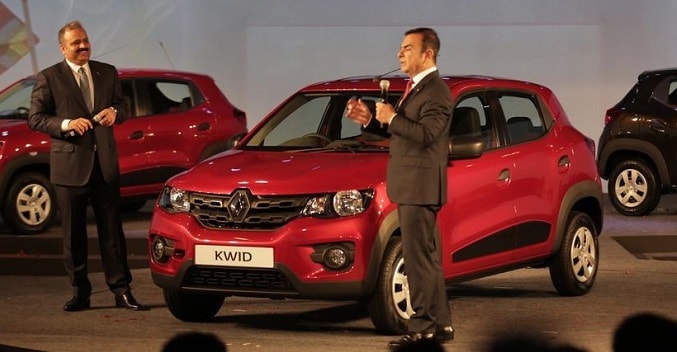 Renault India's much-awaited small car (XBA), the Kwid, finally made its global debut in India today. The launch, however, will take place sometime during the festive season (September - November). To be launched at a starting price of ₹ 3 lakh, the Renault Kwid will take on the likes of Maruti Suzuki Alto 800, Hyundai Eon, and others in the league.

The Renault Kwid is built on an all-new small platform - the CMF-A - jointly developed by the Nissan-Renault Alliance. The same platform will also underpin Datsun India's upcoming small car. The new 800cc, 3-cylinder, petrol engine too has been jointly developed by Renault and Nissan. The smallest engine in the family, it is also claimed to be quite frugal. The company says that the Kwid will return the best-in-class mileage, though it didn't reveal the exact fuel-efficiency figure.

Also Read: 10 Things You Must Know About the Renault Kwid

Renault will launch the Kwid outside India as well, though the company's Chennai-based plant will have its major focus on fulfilling the domestic demand and that of countries surrounding India. Talking about the design, the Renault Kwid seems to have taken its inspiration from several concepts and existing Renault cars. That said, one must note the vehicle looks more like a crossover than a hatchback, thanks to its aggressive styling.

Since it's a global product, Renault undertook its testing across different parts of the world with chassis been tested in Japan, body equipment test in Korea, endurance test in France and assembly testing in India. Developed at Renault-Nissan's Chennai plant, the company has used almost 98 per cent local content to manufacture the car. This will help the company to price the Renault Kwid quite competitively.

- Digital instrument cluster with chrome accents on the air-vents