This is the same engine that is also available in the Polo hatchback but the biggest USP of it is that the small capacity engine is BS VI compliant. 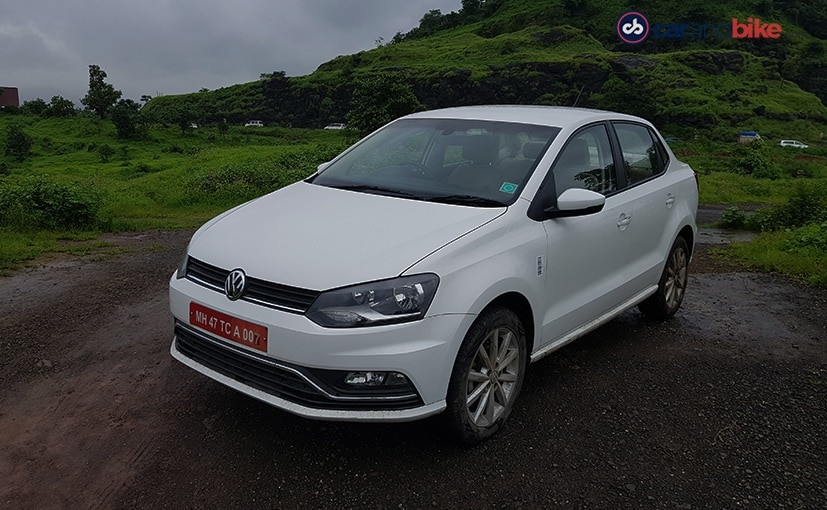 View Photos
The VW Ameo 1-litre churns out the same amount of power as the 1.2-litre it replaces

It didn't take much time for my team to give me a nickname and if you've heard our latest podcast, well, you'd have found out mine. Yes, I am called 'Ameo' by, well, all of them, and I am stuck with that name now, ain't I? It was a nickname that stuck with me ever since Volkswagen launched the Ameo in India. It was the company's first Made-in-India, For India model and it propelled its sales here, despite it being a late entrant, to the subcompact sedan segment. If you'd remember, Volkswagen priced the car extremely aggressively and the company has been selling an average of 1500 units a month ever since its launch. Of course, with the new-gen Maruti Suzuki Dzire and even the Amaze making strides in terms of equipment and looks, the Ameo still holds its ground thanks to the segment first offerings it has, like cruise control and even rain sensing wipers. But it had to do something more and that's when the company decided to replace the 1.2-litre petrol engine with a 1-litre version. 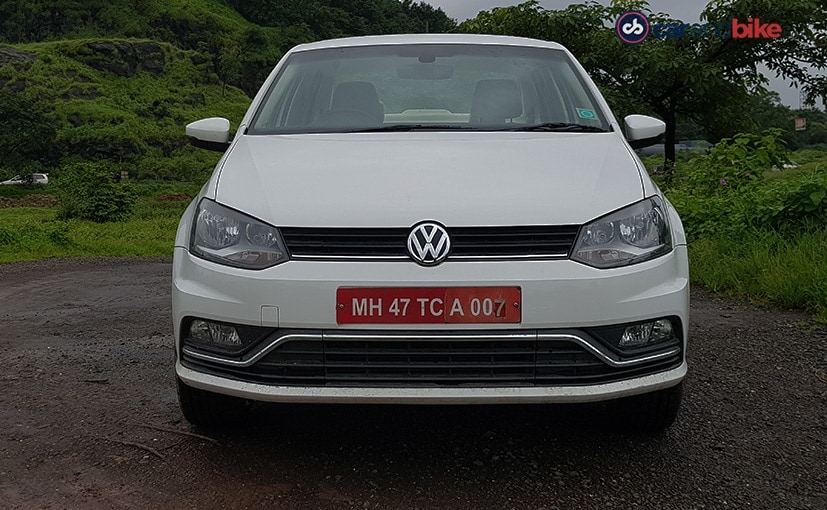 This is the same engine that is also available in the Polo hatchback but its biggest USP is that the small capacity engine is BS VI compliant. Now, we've already driven the 1.2-litre version because that's the one which first made its way on the Ameo. So, what has changed with the 1-litre engine under the hood? 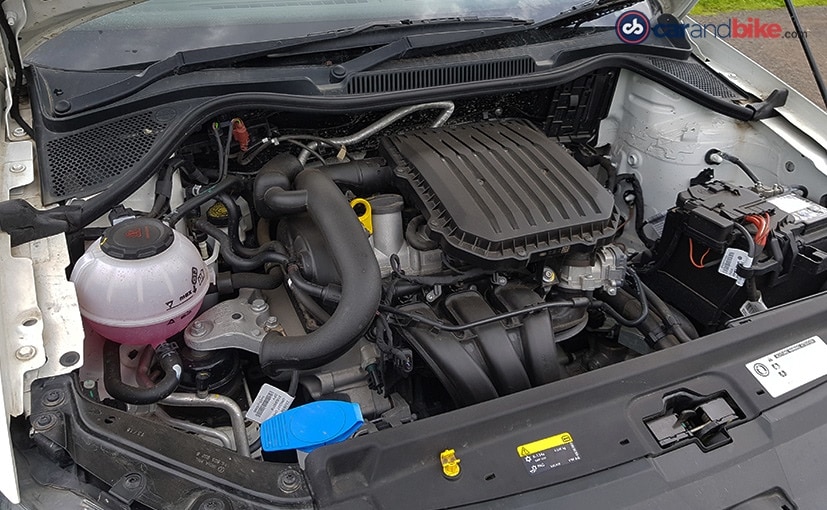 The 1-litre engine produces a similar amount of horsepower as before - 75 bhp. However, torque figures are down by 15 newton metres to 95 Nm (the 1.2-litre version offered 110 Nm). What takes you by surprise is the refinement of that engine at idle. It's silent till about 3000 rpm. Once you build the revs though, at around 3200 rpm the sound from the engine is a bit harsh and there's still an evident lag in power and you really have to plan your overtake manoeuvres well in advance and this is where you really hoped for more power. Sadly you don't get it; which is why we hope to see this one get the 1-litre turbo version which will make things interesting behind the wheel. 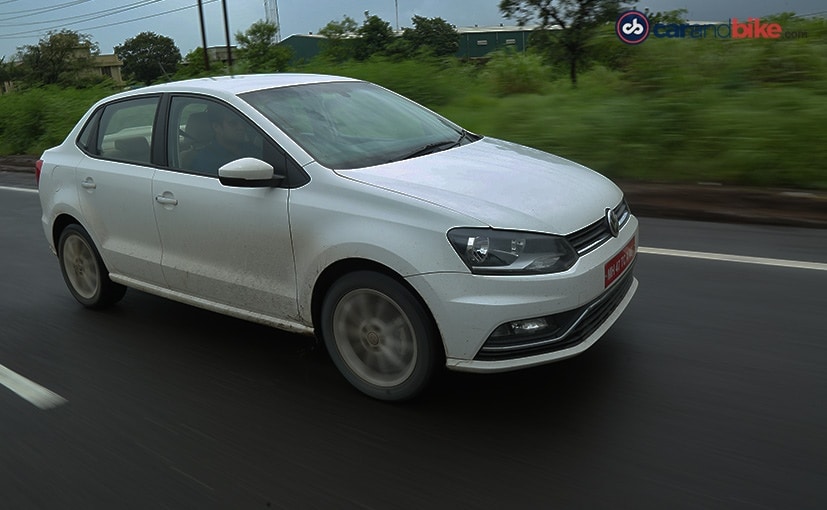 It's always been a good car to drive as the suspension helps in dismissing those potholes with ease and there's no change in that department. A 3-cylinder engine is inherently fuel efficient and according to Volkswagen, the Ameo 1-litre offers 19.44 kilometres to the litre; which is up by almost 2 kmpl from the previous 1.2-litre engine. 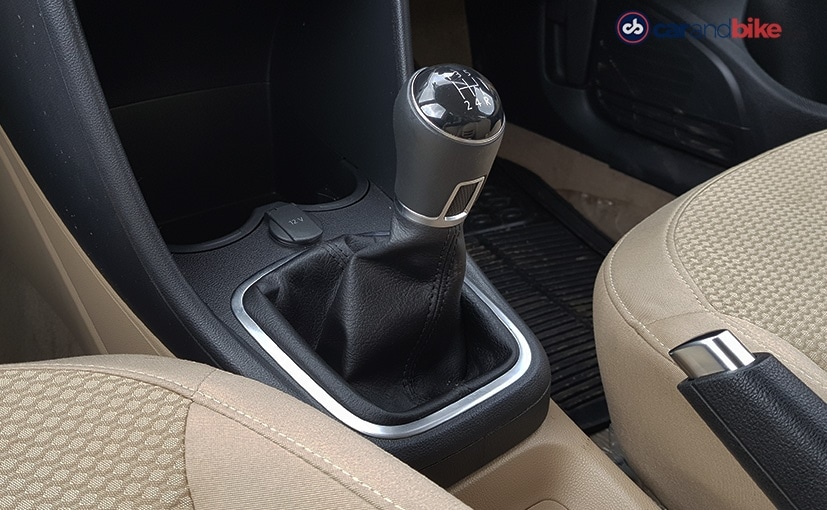 The petrol engine is mated to a 5-speed manual transmission option and there's no automatic on offer. The manual is a delight though because the gears slot in well and the short throws makes it effortless and easy to drive in stop,start traffic conditions. The clutch pedal, however, has a long travel and that takes a toll on your left foot especially during rush hour. 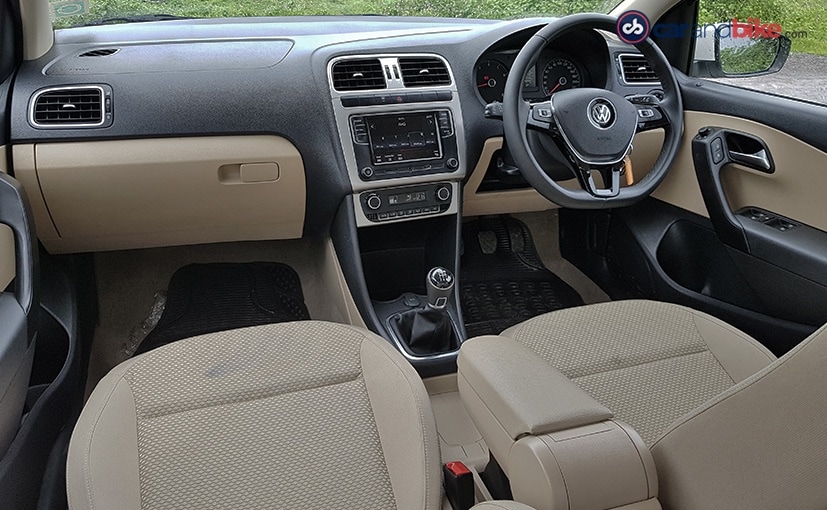 We got to drive the Highline Plus model which comes with a centre armrest up front and it's a real pain when you're changing gears because your elbow keeps hitting it every time you shift. The rest of the cabin remains unchanged. It gets the dual-tone treatment and the seats are very comfortable because there's good amount of thigh as also lumbar support. There’s even the AC vents for the rear seats. 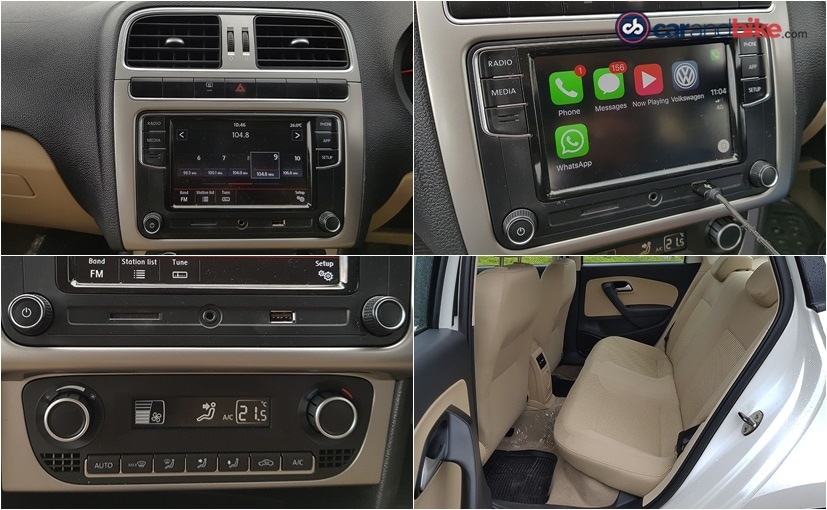 The Volkswagen Ameo 1-litre version gets Apple Carplay and Android Auto, along with Mirrorlink

Being the top of the line model, you get a touchscreen infotainment system which now comes with Apple Carplay and Android Auto. Mirrorlink was always available on the Ameo and it continues to be part of this one too. There's also a reverse parking camera and rain sensing wipers. What's missing from the package though is Navigation and given the tough competition in the segment, we think it should have been part of the package. On the safety front, the Ameo gets ABS and dual airbags as standard equipment. 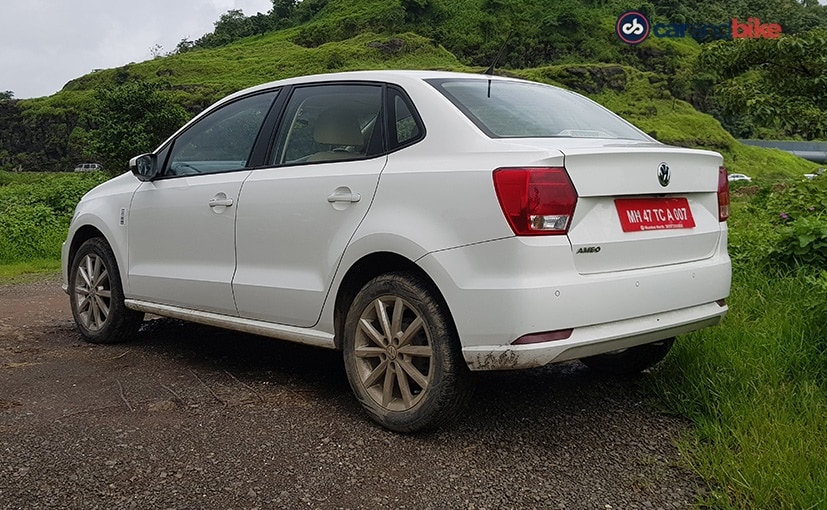 Finally, the price, the 1-litre version of the Ameo is priced at ₹ 5.62 lakh and tops out at ₹ 7.57 lakh which shows that there's been no change in the price of the car compared to the 1.2-litre petrol. The base variant (Trendline) of the petrol Ameo is more expensive than most of its competitors, but the top end Highline Plus variant undercuts the Hyundai Xcent by ₹ 7000 thousand rupees and even the Maruti Suzuki Dzire by almost ₹ 20,000. While the Ameo has the least power amongst the petrol subcompact sedans, it does not have an adverse impact on driveability. And yes, there's no denying that the car is still a good value proposition.