The new-gen Maruti Suzuki Dzire is built on the company's new HEARTECT platform and comes with a host of comfort and safety features. Among the new features we have - LED projector headlamps, DRLs, touchscreen infotainment system with Apple CarPlay and more. The 2017 Maruti Suzuki Dzire has finally gone on sale in India and there is no doubt that it has been one of the most anticipated car launches for this year. The Dzire is priced in India starting from ₹ 5.45 lakh for the petrol variant and ₹ 6.45 lakh for the diesel variant (both ex-showroom, Delhi). The car has been available for booking at dealerships for a token of ₹ 11,000 and the company has already garnered over 33,000 bookings in the last 11 days. The new Dzire primarily comes on four variants, in both petrol and diesel trim options - LXi/LDi, VXi/VDi, ZXi/ZDi, and ZXi+/ZDi+ and is based on the completely new HEARTECT platform. In fact, the company has invested about ₹ 1,000 crore in the development of the new-gen Maruti Suzuki Dzire.

Now, the price of the car is quite close to what we had expected. We have been bringing you all the updates of the new Dzire live from launch and there's a lot more that's new on the car than what meets the eye. The all-new Maruti Suzuki Dzire is lighter, feature loaded and more sedan-like in the all-new avatar and ditches the 'Swift' prefix from its nameplate. As one of India's top-selling models, the Dzire already has a host of milestones to its credit and the third generation model is expected to keep the momentum going for Maruti Suzuki in terms of volumes.

Unveiled last month, the 2017 Maruti Suzuki Dzire is a completely new model. And we have already told you a lot about the car. The styling is derived from the new generation Swift hatchback and gets a massive trapezoidal grille and a raked A-pillar for a more sedan-like stance. The C-pillar also merges more seamlessly into the boot and the car looks a lot more proportionate this time. The new Dzire gets projector headlamps with LED DRLs, LED tail lights with a signature light for a distinctive touch, however, this is only available in the top-end VXi/ZXi trim. There are also three new colours on offer with the 2017 Dzire - Oxford Blue, Gallant Red and Sherwood Brown, and fancier 15-inch diamond cut alloy wheels. 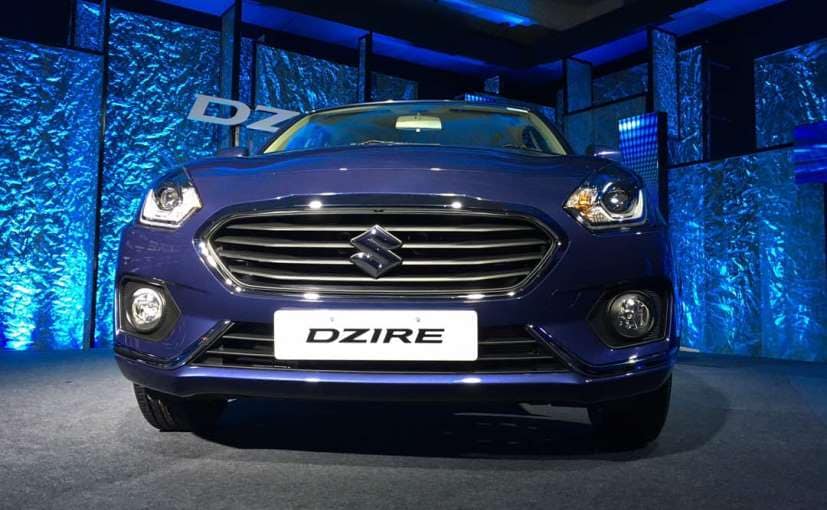 With respect to dimensions, the new Maruti Dzire measures 3995 mm in length, 1735 mm in width and 1515 mm in height, and has a wheelbase of 2450 mm. The sedan is wider by 20 mm, while the wheelbase has also grown by 20 mm over its predecessor. The ground clearance stands at 163 mm and has been lowered by 7 mm. Meanwhile, the height is shorter by 40 mm. That said, the 2017 Dzire sports a bigger boot at 379 litres and improved knee room as well. The new HEARTECT platform is lighter and stronger than the older version with the use of high tensile steel in the construction and has helped lose up to 85 kg on the petrol and up to 105 kg on the diesel variants.

Inside, Maruti Suzuki has made way for a plush looking cabin on the new Dzire. The car comes with leather-wrapped steering, flat-bottom steering wheel and auto climate control. The two-tone colour combination looks premium and is complemented with features like engine push start-stop button, rear AC vents and a touchscreen infotainment system that supports Android Auto and Apple CarPlay as well as MirrorLink. The new Dzire also comes with dual front airbags, ABS with EBD and Brake Assist as standard on all trims, which is welcoming. The rear seats also get ISOFIX child anchorages. The new Dzire gets the same petrol and diesel engines

The Maruti Suzuki Dzire has been the undisputed leader in the subcompact sedan space, but the segment has also gotten a lot more crowded than before. With the third generation model, Maruti has managed to iron out certain deficits while also offering a lot more now. The new Dzire competes with the new Hyundai Xcent, Volkswagen Ameo, Tata Zest and Tigor, Honda Amaze and the Ford Aspire.  You can check out the spec comparison as well. Make sure to watch out for our comprehensive review of the new Dzire coming up very soon.