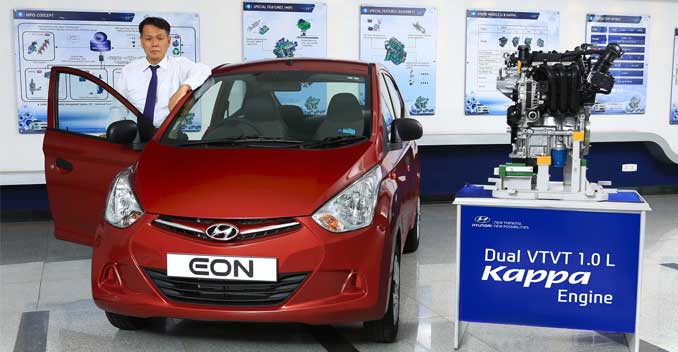 Hyundai Motor India Limited (HMIL) has now officially announced the launch of the Eon's more powerful variant with a 1.0-liter Kappa engine. NDTV Auto had already reported about this six days back and revealed the prices. The Eon 1.0 Kappa engine will be available in Magna+ variant at ₹ 3,83,130 (ex-showroom New Delhi).

Mated to the latest dual VTVT technology, the 1.0-litre Kappa petrol engine of the new model delivers 68bhp and 94bhp. With the improved power output figures, the Eon 1.0L will take on Datsun Go and WagonR. The company has also claimed the new model to return an ARAI certified mileage of 20.3kmpl.

Commenting on the introduction of new engine variant of Eon, B S Seo, Managing Director and CEO, HMIL said, "Hyundai Eon has been a trendsetter of style, performance, design and finesse in its segment and has received good acceptability and appreciation from its customers. Hyundai consistently innovates to meet and exceed the demands of the customer and the 1.0 Litre Kappa engine now offered in Eon is an extension of our modern-premium brand philosophy and will delight our customers with unparalleled driving experience and further consolidate Hyundai's position in the domestic market."