Honda's Marc Marquez took a dramatic pass to win the San Marino GP, even as Petronas Yamaha's Fabio Quartararo put up a tough fight having led from the start. 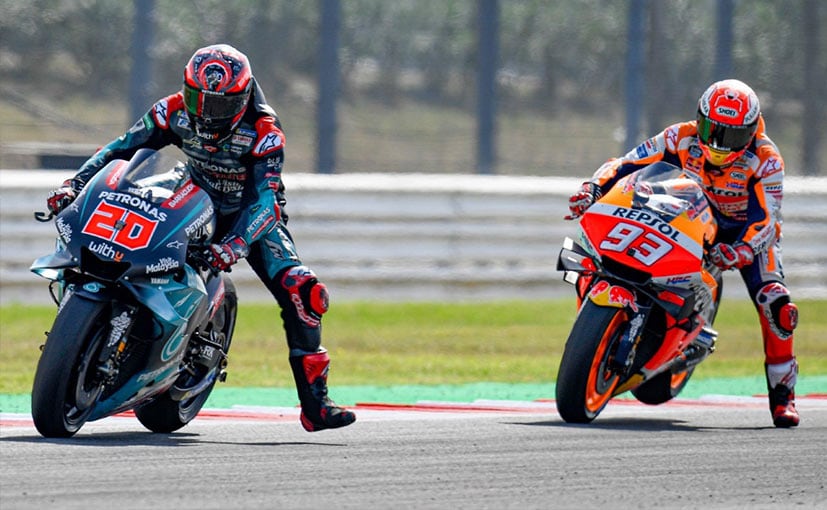 Reigning MotoGP champion Marc Marquez won the 2019 San Marino Grand Prix this weekend, but after a hard-fought, last-lap duel with Fabio Quartararo. The Petronas Yamaha rookie proved to be quite the threat in the closing stages after leading most of the race. Rounding up the podium finishes was factory Yamaha rider Maverick Vinales, who started on pole and maintained the momentum to finish on the podium. Marquez has now extended his championship lead by 93 points with the victory at San Marino. 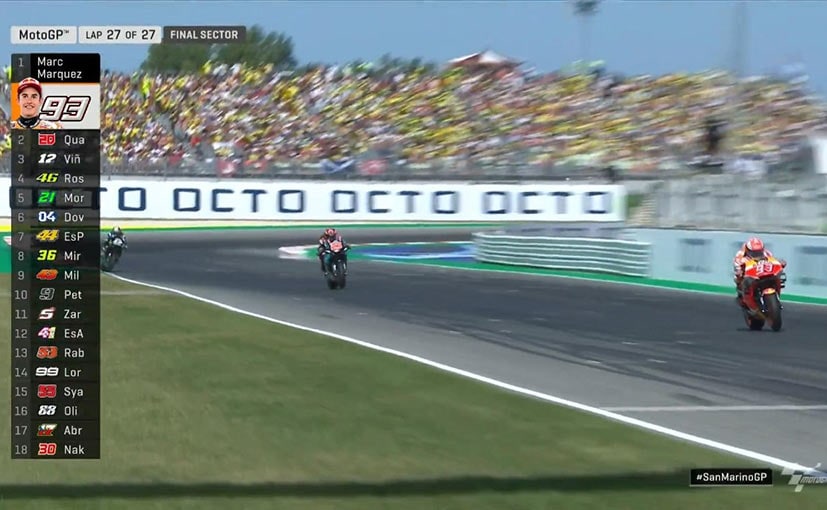 The 2019 San Marino GP started with Vinales on pole position with Quartararo and teammate Pol Espargaro starting in the first row. The opening stages saw Yamaha riders lead the grid, albeit briefly. Marquez, meanwhile, started fifth on the grid, after a qualifying run-in with Valentino Rossi on the final lap. The latter started seventh on the grid, as a result. Marquez had a good start and managed to pass Morbidelli at Turn 8 on the second lap to move up to P4, right behind the Yamahas.

While Marquez was still catching up with Quartararo, the rider found a gap on Turn 10  to edge ahead into P1 and immediately began breaking away from the rest of the pack. Quartararo built a one second lead over the field, while Marquez was attacking Vinales to take P2. The Petronas Yamaha racer had a fantastic ride over the next 26 laps as he held on to the lead despite Marquez coming in reach within one tenths of a second. 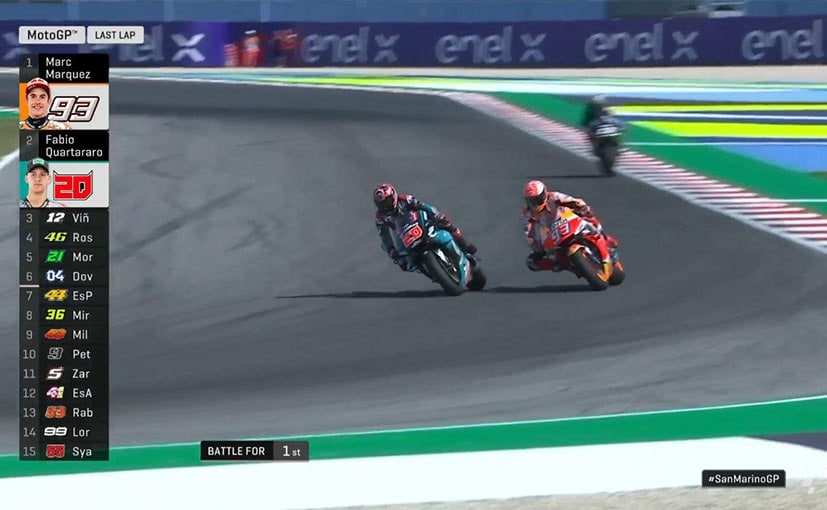 However, Quartararo was feeling the pressure being built but managed to fend off attacks from the Honda rider, in what looked would be his maiden victory in MotoGP. However, with just three laps to go, Marquez clearly put his performance in overdrive and pulled alongside Quartararo on Turn 1 of the penultimate lap to take the lead. The Petronos rider though wasn't giving it away so asily and regained the lead on Turn 4.

It was the kind of edge-of-the-seat action you would expect from a MotoGP race as Quartararo fended off Marquez's attacks over the next few corners. With a difference of a hair's length, Marquez finally found opportunity to pass the leader on Turn 14 after Quartararo had to release the throttle in order to avoid making contact with the Honda. Nevertheless, the Petronas rider put up a tough right finishing 0.903s behind the race leader.

Crossing the chequered flag 1.636s later was Vinales, and was followed by Rossi, who moved up to P4 after starting seventh, while Franco Morbidelli finished fifth, making it four Yamaha riders in the top five. Coming in sixth was Ducati's Andrea Dovizioso after a difficult race for the team, followed by Pol Espargaro at P7 and Joan Miller of Suzuki at P8, who returned from an injury.

Coming in ninth was Ducati's Jack Miller, followed by Pramac Ducati's Danilo Petrucci taking P10. Johan Zarco of KTM finished 11th, ahead of Aleix Espargaro of Aprilia, who was the sole rider for the team due to an injured Andrea Iannone. Honda's second rider Jorge Lorenzo finished 14th behind Tito Rabat of Avintia Ducati. Tech3's Hafizh Syahrin was the 15th fastest and picked up the final point, ahead of teammate Miguel Oliveira, Avintia Ducati's Karel Abraham and LCR Honda rider Takaaki Nakagami. 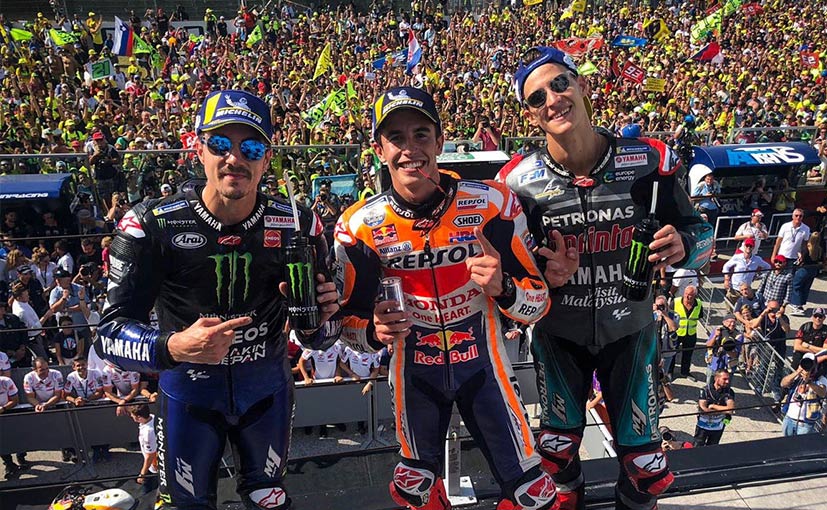 On the Podium - Fabio Quartararo, Marc Marquez and Maverick Vinales

The San Marino GP had its share of retirements as well with the most disappointing being Suzuki's Alex Rins, who stalled after running as high as P6. LCR Honda's Cal Crutchlow and Ducati wildcard Michele Pirro crashed, while Pramac rider Franscesco Bagnaia and Olveria crashed as well, only for the latter remount and finish 16th.