The top-spec model of the Triumph Thruxton cafe racer will likely be revealed at the EICMA 2019 motorcycle show in Milan, Italy in early November. 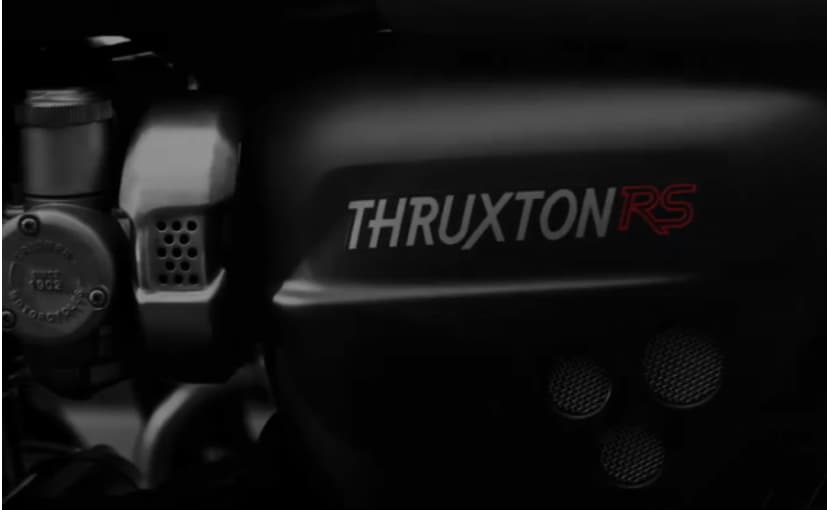 Triumph Motorcycles has teased what seems to be another variant of its Bonneville family cafe racer, the Triumph Thruxton. Teaser videos released by Triumph on its social media handles reveal the Triumph Thruxton RS, and it's likely to be the top-spec variant in the Thruxton family, with similar nomenclature like the Street Triple family - Street Triple R, and Street Triple ₹ The Thruxton RS will join the standard Thruxton, and Thruxton R models and is likely to be the highest-spec variant in the cafe racer series.

So far, the Triumph Thruxton R is the top-spec variant, which is the only model in the cafe racer family sold in India. And the 'R' version has top-notch specifications, including premium components, like Brembo brakes, sticky Pirelli Diablo Rosso Corsa tyres, fully adjustable suspension, comprising a Showa upside down big piston fork and fully-adjustable Ohlins shocks at the rear. The 1200 cc, 'high-power' Bonneville engine of the Thruxton R puts out 96 bhp at 6,750 rpm and 112 Nm of peak torque at 4,950 rpm. The Thruxton RS will likely feature better hardware, as well as a higher price tag than the current Thruxton R.

So far, we can only guess that the Thruxton RS will now be the top-spec variant in the Thruxton range. Considering Triumph unveiled a limited run of Thruxton TFC (Triumph Factory Custom) models with even more kit and performance on offer, like billet aluminium bits, carbon fibre bodywork, as well as Vance & Hines exhaust system and a revised engine with 10 bhp more power, the new Thruxton RS could possibly get the same state of tune on the engine, giving it the 'RS' tag justification. The front fork on the Thruxton RS is also likely to be an Ohlins NIX 30 number, from the Thruxton TFC. More details will be known when the bike is officially, revealed, at the EICMA 2019 show in Milan, Italy, in November 2019.