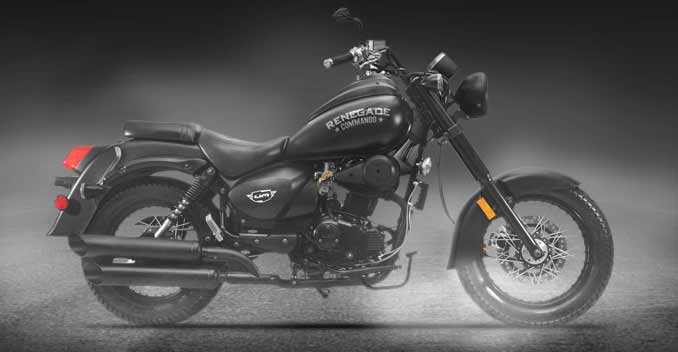 While announcing the JV, the company also ruled out the possibility of bringing in its popular 'Renegade' series of bikes. After revealing the Renegade at the 2014 Delhi Auto Expo, the company's market research revealed that an all-new range of bikes, based on an all-new platform, will be a better option instead of the Renegade. The company also revealed that it is working on up to 500cc bikes, and will roll out its first product in the second quarter of 2015. Initially, the company will launch affordable cruisers in the 300-500cc range and intends to enter other segments at a later stage. To make these bikes affordable, the company is aiming to achieve up to 70% localisation level.

Mr Ayush Lohia, Director, Lohia Auto said, "The Products of UM blend with our strength of manufacturing will definitely enthrall to Indian bike lovers. We are committed to produce the world class quality Bikes at our Kashipur plant. We are also committed to delight Indian consumers with our sales, after sales services and products."

Aiming to produce 1,00,000 units/year, UM will manufacture its bikes at Lohia Auto's existing facility in Kashipur, Uttarkhad. Production is expected to start around the second quarter of 2015. The company said that the overall investment in the JV company will be approximately Rs 120 crores over a definitive period. Along with fulfilling the Indian demand, UM also aims to utilise its Indian facility as an export hub.

Mr Juan Villegas, Director UM International said, "UM International is here to make a difference in the Indian motorcycle arena and not just one more player. We are looking at India with long term perspective, with a vision to not to only cater to domestic need but to also export to different part of the world. We will continuously keep improving our products to be ahead of the league in terms of performance and affordability. We will launch bikes in all segments including sports and touring as we move forward."

Mr Rajeev Mishra, Director, UM India, comments, "We wish to draw an equally valuable experience for both the parties as this Joint Venture is extremely significant for UM International's expansion in the India. We are extremely positive that the Indian consumer will equally appreciate the tailor made product we bring along with the manufacturing experience of Lohia Auto. We promise to constantly surprise the Indian consumer with our innovative, affordable motorcycles clubbed with our comfort driven approach, till UM Motorcycles becomes a household name."