The 2018 Ducati Multistrada 1260 has been priced competitively and gets massive upgrades over its predecessor. With list down the key features on the new adventure tourer. 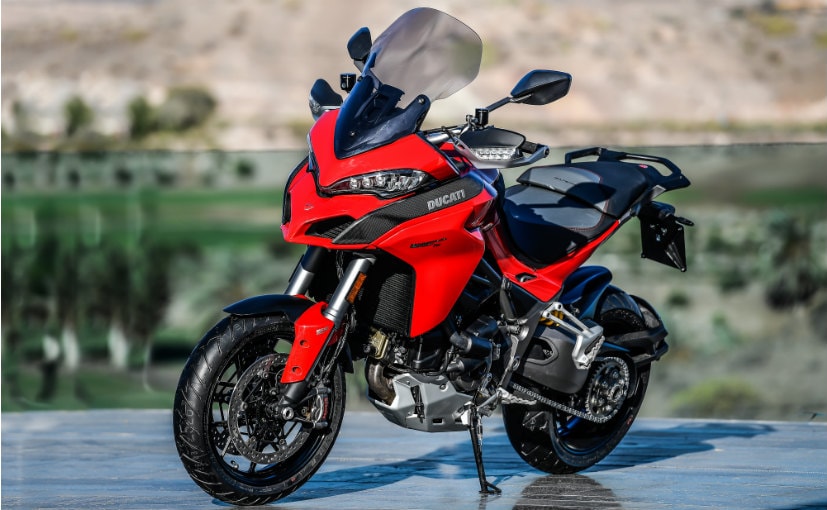 The Ducati Multistrada has been a massive success for the Italian motorcycle maker as its go-anywhere, do-it-all offering. The Multstrada is capable of long distance tours and off-road as well, but can be taken to the track, should you wish. The newly launched Ducati Multistrada 1260 promises to retains those capabilities while offering an improved in all departments. The Multistrada 1260 has been launched in India with prices starting at ₹ 15.99 lakh (ex-showroom) replacing 1200 versions and boasts of a new engine, revised chassis and advanced electronics on offer. It is also a lot more capable as well in the newest avatar and certainly builds on the positives of the Multistrada family. The Multistrada 1260 is the third bike out of Ducati India's four bike launch plan for 2018, and here are all the key features that you should know about on the new adventure motorcycle. 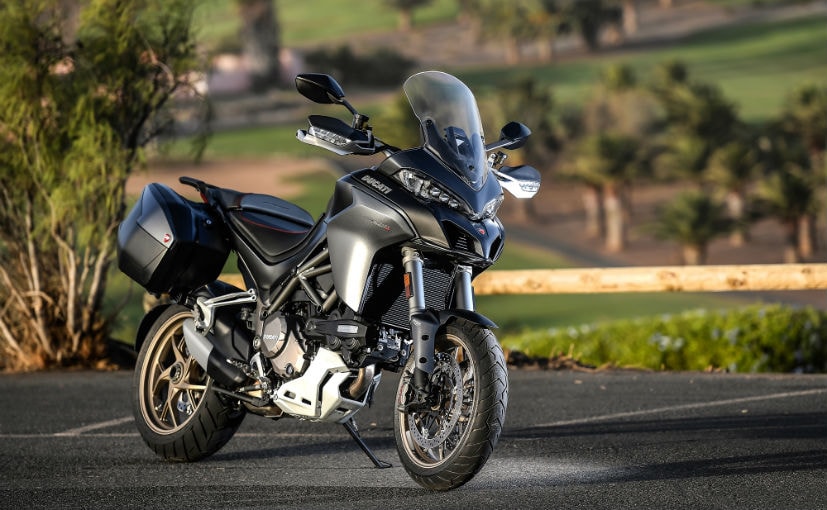 (The Ducati Multistrada 1260 comes with cornering lights, new side panels and a new rear subframe)

The Ducati Multistrada 1260 remains identical to the predecessor in appearance but gets several subtle upgrades. The windscreen is taller, and the fairing is wider than the 1200. The side fairing panels are new and the rear gets incorporated luggage mounts in the aluminium subframe. The new Multistrada 1260 also gets full-LED headlamps with cornering function. The standard 1260 will be available in Ducati Red with a grey frame and black wheels, while the S is offered in Iceberg White and Volcano Grey shades with both a grey frame and gold wheels. 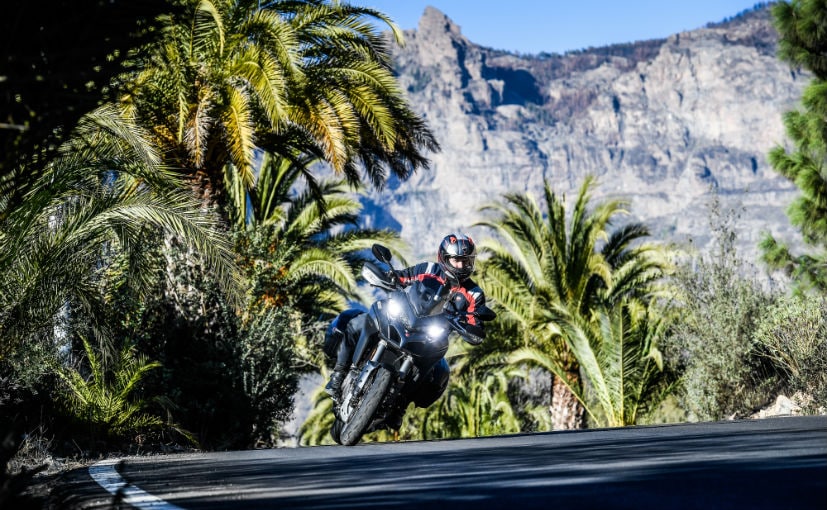 (The Ducati Multistrada 1260 gets full-LED headlamps with cornering lights)

The new Ducati Multistrada 1260 also gets changes to the trellis frame with a main front frame, two lateral sub-frames and a die-cast single-sided swingarm. The bike gets 25 degree steering angle as compared to the 24 degree angle from the 1200, while the ADV also comes with a 48 mm longer swingarm which has made the wheelbase 55 mm longer than the older model. Ducati says the updates make the 1260 sharper and fully adjustable, while improving on its handling skills massively. 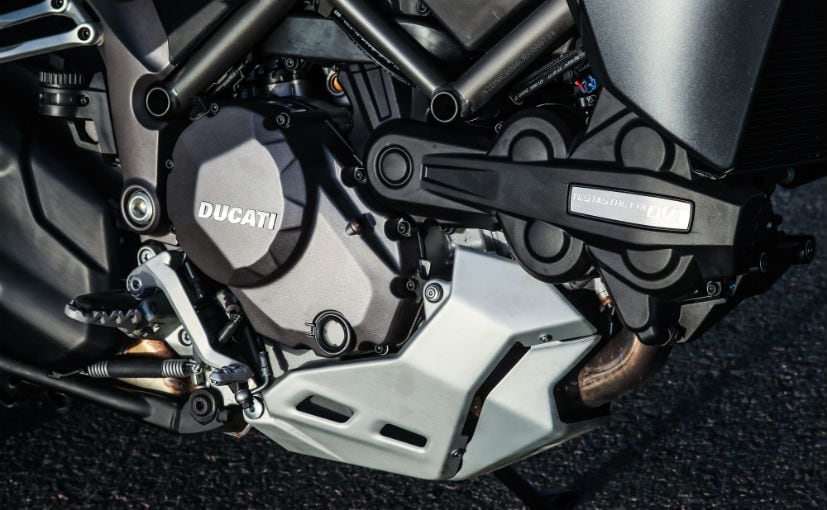 Another major update on the 2018 Ducati Multistrada 1260 is the all-new motor that replaces 1198 cc engine. The new 1262 cc, L-Twin Testastretta motor with Desmodromic Variable Timing (DVT) has been tuned for 158 bhp and 129.5 Nm of peak torque, while paired with a 6-speed gearbox. That's a massive power upgrade over the Multistrada 1200, and the engine has been said to be optimised for even better low and mid-range torque output, 85 per cent of which is available from 3500 rpm. 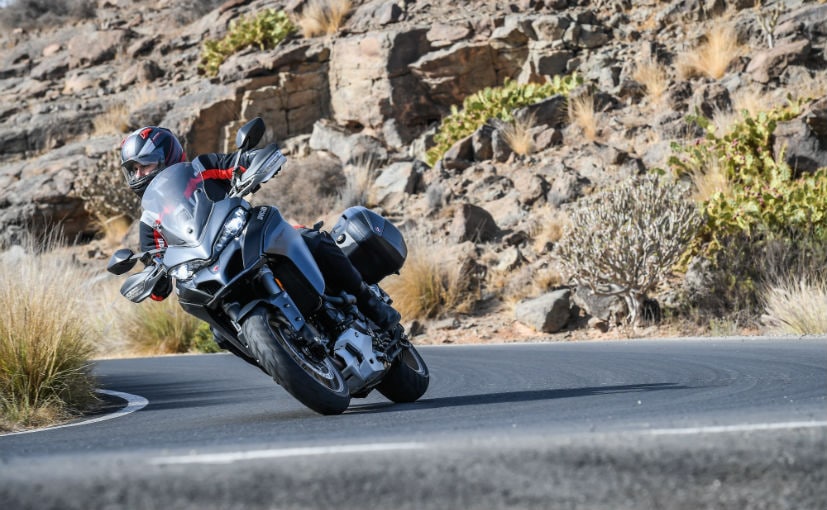 The 2018 Ducati Multistrada 1260 gets a new semi-active suspension setup that further helps improve the handling capabilities on the adventure tourer. The bike now comes with preload, compression, and rebound adjustable 48 mm USD Kayaba forks up front with a dedicated cast bottom bracket, while the rear gets gets a Sachs monoshock unit via a remote manual adjuster. On the higher spec 1260 S, the bike uses the Ducati Skyhook Suspension (DSS) Evolution system, that works to adjust the suspension automatically or manually via the onboard computer. Braking power comes from the 330 mm twin discs up front and a 265 mm disc brake at the rear. Both the units are sourced from Brembo. 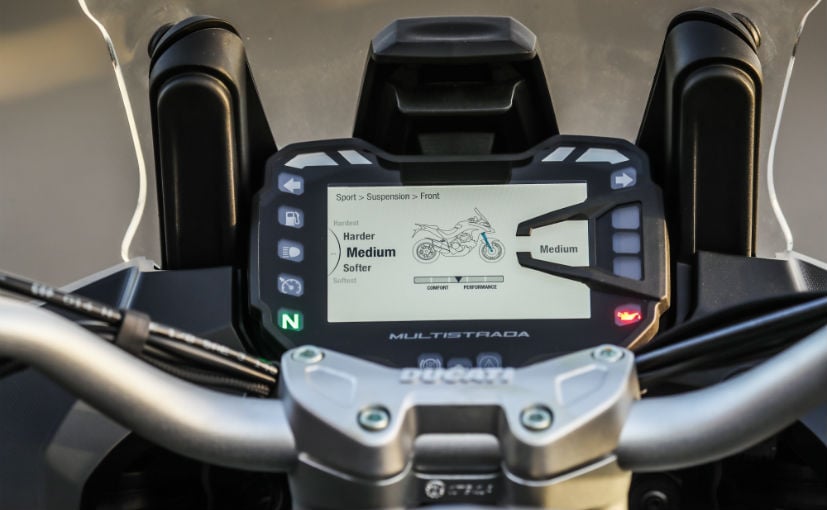 The new Multistrada 1260 has received massive upgrades on the tech front with a host of advanced electronics on offer. The 1260 now gets a 5-inch full-colour TFT instrument display to access to almost every setting on the motorcycle. The bike also gets a bunch of rider aids including wheelie contro, cornering ABS, as well as the Bosch IMU (Inertial Measurement Unit). The wheelie and traction control units comes with 8-levels of adjustability and can also be disabled.

Furthermore, cruise control comes as standard on the Multistrada 1260, while the S version includes a Bluetooth function via the Ducati Multimedia System (DMS) and allows you to connect your smartphone to the bike with incoming calls, text messages and music showing up on the instrument display. The Multistrada 1260 also gets the Ducati Quick Shifter for seamless upshifts and downshifts, and also comes with keyless ignition. The 1260 can be controlled using four riding modes - Sport, Urban, Touring and Enduro, while the Vehicle Hold Control makes for easy uphill starts.