Images of the new generation Hyundai Santa Fe have made their way online ahead of its public debut later this month on February 21, 2018. 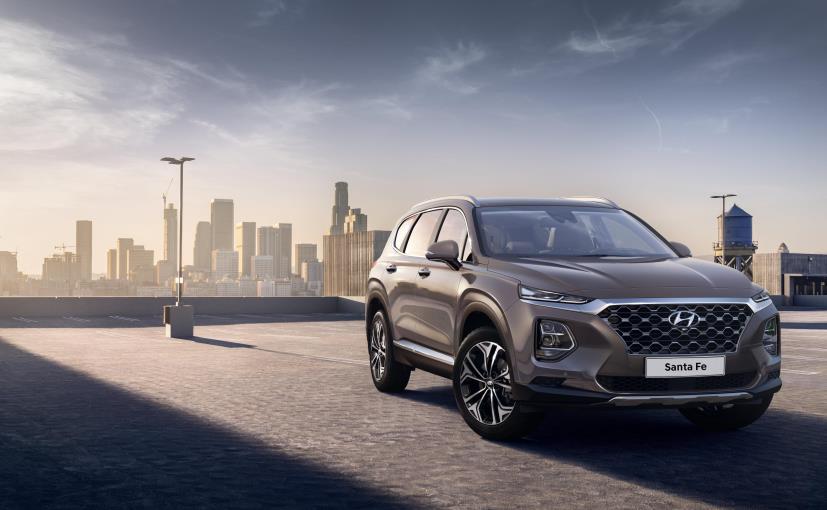 Images of the new-gen 2018 Hyundai Santa Fe SUV have been released ahead of its official debut, which is slated for February 21. This is the fourth-generation Hyundai Santa Fe which is said to make its global debut and the SUV is expected to come to India as well, of course, a little later this year. The SUV is set to make its world premiere at the Hyundai home market in South Korea, but the public debut will take place at the Geneva Motor Show 2018. Based on the latest images we can see that the new Santa Fe has come a long way ahead from the outgoing model.

The latest image of the Hyundai Santa Fe shows that the SUV will come with some major similarities to the design sketches that were released last month. Up front, the SUV comes with Hyundai's new signature cascading grille with black treatment, there is also a chrome slat that runs along the top of the grille connecting the chrome insets below the LED lamps giving the impression of one single unit. The SUV comes with the new dual headlights setup like the Hyundai Kona with the twin projectors housed lower on the muscular bumper and the sleek LED lights up, above the grille. Below the grille, the Santa Fe comes with a wide central air dam and a plastic cladding with skid plate.

From the sides we can see the new Santa Fe gets a stylish set of dual tone alloy wheels that gives the impression of a two-tone design, some sharp character lines along the wheel arches and profile and new ORVMs with integrated indications. Hyundai hasn't revealed the rear portion of the SUV, but based on the design sketches, we can tell that the Santa Fe will come with a pair of sweptback LED taillamps, a coupe-like rear, muscular rear bumper with rear diffuser, and distinctive twin exhaust tips. 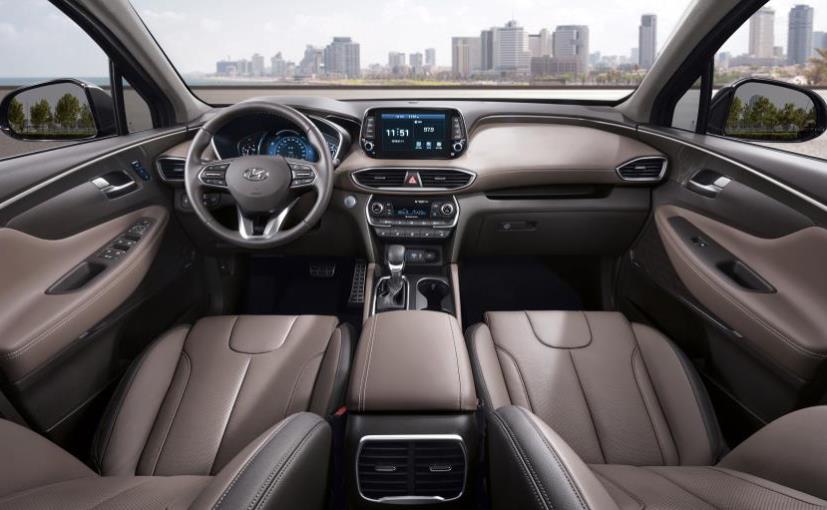 The Santa Fe has also grown in size and comes with a total length of 4,770 mm, a width of 1,890 mm and a slightly longer wheelbase that translates into a more comfortable cabin. The interior design combines premium quality with a horizontal and roomy layout and enhanced visibility. The centre stage on the new dashboard is taken by a new touchscreen infotainment system buttons and dials on either side, below we have the central aircon vents, and the automatic climate control other in-car controls and dials placed below it. The interior appears to uses a lot of soft-touch material and leather, especially for the central and side armrests and upholstery. The SUV also gets a new three-part instrument cluster and a multi-functional steering wheel.

The new Santa Fe will also offer some of the best-in-class safety features, like Rear Cross-Traffic Collision-Avoidance Assist which when reversing out of areas with low visibility, the system not only warns the driver if vehicles approach from the side - it also applies the brakes automatically. There is also the Safety Exit Assist which prevents accidents when vehicles approach from behind by temporarily locking the doors so that passengers will exit the car safely after the vehicle has passed.