The Aston Martin DB11 Volante gets a 4.0-litre biturbo V8 that makes 503 bhp and develops 675 Nm of peak torque. The car's soft top can be lowered in just 14 seconds. 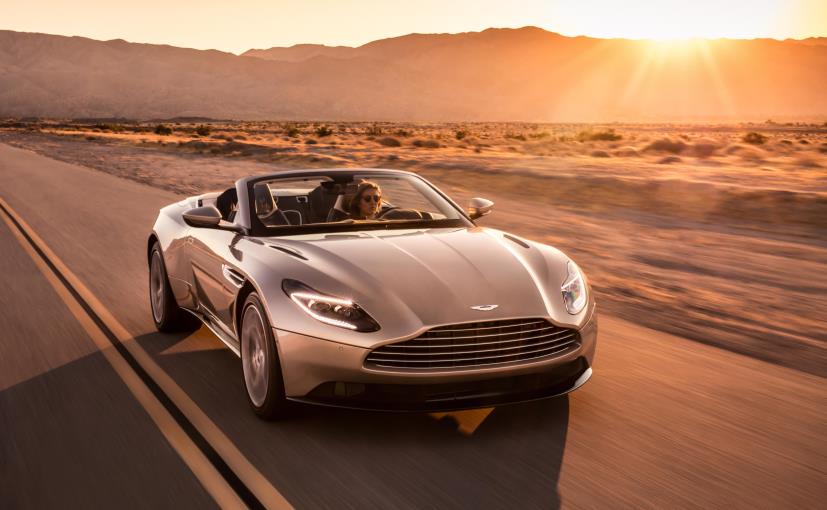 View Photos
The Aston Martin DB11 Volante can do a 0-100km/h sprint in just 4.1 seconds

Aston Martin has revealed the DB11 Volante convertible and might we state that it looks absolutely gorgeous. While it may not be the right time to bring out a convertible considering winter is around the corner and spring is still away, Aston Martin doesn't feel anything of that sort. The DB11 Volante combines the beautiful lines of the coupe and brings in a soft top what can be lowered in just 14 seconds.

The Aston Martin DB11 Volante is only available with the brand's Mercedes-AMG-sourced 4.0-litre biturbo V8. Similar to the coupe, the engine produces 503 bhp and develops 675 Nm of peak torque. There's an eight-speed automatic gearbox which pushes all that power to the rear wheels, and a standard limited-slip differential improves traction. The drop top can do a 0-100km/h sprint in just 4.1 seconds while topping out at 300 kmph. The convertible is a tenth of a second slower to 100 kmph and has the same maximum velocity as the V8-powered coupe.

"With the DB11 Volante we have maximized the advantages of the DB11's all-new bonded structure to underpin our new Volante with a structure that's 26 kg (57 lb) lighter and 5 per cent stiffer than its predecessor," Max Szwaj, Aston Martin Chief Technical Officer, said in the model's announcement.

The Volante features the same design as the DB11 coupe, except for the folding soft top. It's available in bordeaux red, black, silver or grey silver. A standard Alcantara headliner on the inside creates a more luxurious cabin. If the weather changes suddenly, the roof can close in 16 seconds.

The DB11 Volante gets an eight-inch infotainment system with navigation, and customers can upgrade the sound system to a 13-speaker setup from Bang & Olufsen. For the first time ever in an Aston Martin Volante model, the rear seat has ISOFIX attachment points, so owners with toddlers can strap them into the back for a safe ride. The trunk is also 20 percent larger than the outgoing DB9 Volante, so there's plenty of room for luggage too

While the bookings for the Aston Martin DB11 Volante have already started, deliveries of the car will only begin by mid-2018.