The Audi E-Tron is being manufactured at the company's Brussels facility, in Belgium, and the new E-Tron will be making its global debut later this month, on September 17. 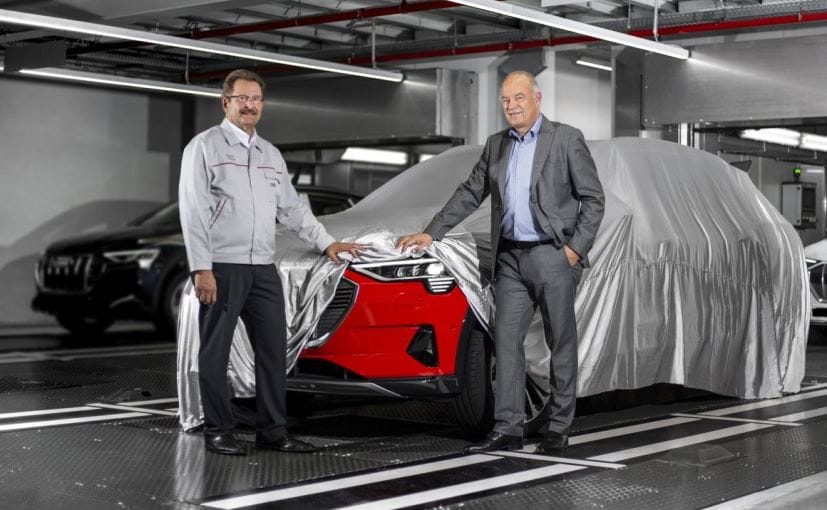 Audi has officially started with the volume production of its first all-electric SUV, the Audi E-Tron. The electric SUV is being manufactured at the company's Brussels facility, in Belgium, and the new E-Tron will be making its global debut later this month, on September 17, in San Francisco. Ahead of the big unveil Audi has also come out with a new teaser image, and beneath the covers, we can see a portion of the production E-Tron in vibrant Catalunya Red body colour.

Talking about the electric SUV, Peter Kossler, Member of the Board of Management for Production and Logistics Audi AG said, "It features innovative technologies such as virtual exterior mirrors and combines traditional Audi qualities in handling and dynamics with technical Vorsprung that goes far beyond the car. Our Brussels plant was comprehensively modernised for the production of the electric car. This is the world's first certified CO2-neutral mass production in the premium segment."

The Audi E-Tron electric SUV is claimed to offer a range suitable for everyday use. In fact, the Ingolstadt-based carmaker says that the Audi E-Tron comes with a charging capacity of up to 150 kW and can be fully charged at a quick-charging station, making it a viable option for long-distance journies as well. "Audi built up numerous competencies in-house for the Audi e-Tron and developed both the battery technology and the actual drive system itself. And employees rethought, planned and implemented many stages of production," said Patrick Danau, Managing Director of Audi Brussels.

Inside the Audi e-tron, the cabin forms a large wraparound arc, that envelops the extensive instrument panel with pronounced horizontal lines as far round as the sculptural door trims. It also incorporates the hood above the standard Audi virtual cockpit, which is not just sleek in its look but also frees up a lot of space. The optional virtual exterior mirrors are just an added bonus. Another added feature in the e-tron is the center tunnel console which rests on open sidewalls. The hand rest with integrated gear change lever appears to float above the console.

The fully electric e-Tron is a five-passenger SUV aimed at the heart of the premium market with its progressive design, advanced electric and digital technology. The e-Tron is expected to be delivered to showrooms in the first part of 2019 and will be the first of three battery-electric vehicles that Audi plans to debut by 2020.