The second stage of the 2019 Merzouga Rally saw both Indian teams - Hero MotoSports Team Rally and Sherco TVS Rally Team post a strong finish in top five positions. TVS' Michael Metge was the fastest rider for the day completing the stage in 03h42m09s, followed by Hero's Oriol Mena who finished the stage, 01m16s behind Metge. Teammate Joaquim Rodrigues (JRod) finished at the end of the stage, +01m 37s off the race leader behind Adrian Van Beveren of Yamaha Racing. The second stage saw riders face a 212 km special section divided into two parts.

The first part was the trickiest for the riders at 86 km long and featured the dunes of Erg Chebbi, the landmark for which the Merzouga region is famous. The second part of the stage was much faster, crossing over a mountain range, albeit with tricky navigation. The weather conditions worsened though over Day 1 as the rains all through the week leading up to the rally had washed away the track, making navigation more difficult. 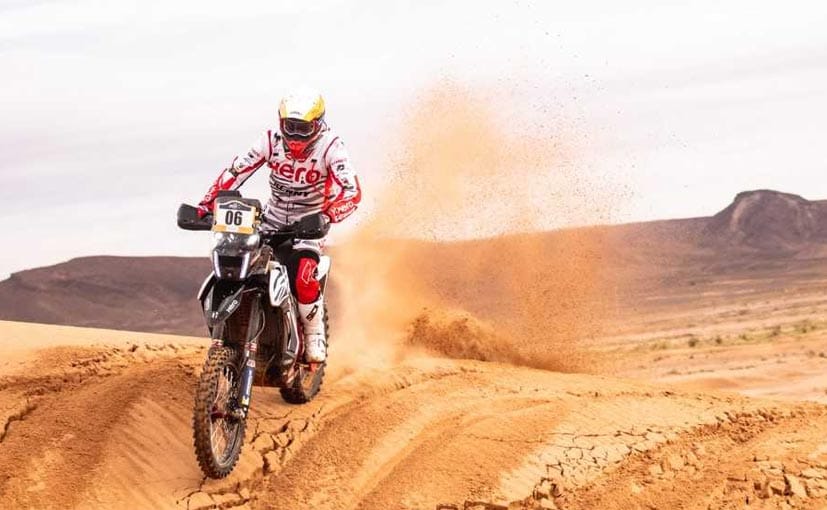 Overall, it was Yamaha's Van Beveren leading the rankings at the end of Stage 2, followed by Michael Metge in second place and JRod in third position. Oriol Mena stands in fifth place in overall rankings having put a strong show through the second day. Indian rider Aravind KP had a difficult run through the day owing to technical issues and finished 69th at the end of Stage 2, and is placed 67th overall. Competing in the Enduro category, Sherco TVS rider Abdul Wahid Tanveer showed strong form and completed the stage in second place, retaining third place in overall standings.

Speaking about the performance on Day 2, Orio Mena said, Hero rider, Oriol Mena said, "It was a good day for me today, got into a nice rhythm and rode well. I did not make any mistakes and manage to catch up with the guys in front. In the second part too, did not commit any mistakes and rode with a nice pace all through the way. I feel good after today's stage so now one day less to go."

Hero's Joaquim Rodrigues said, "Today was a really difficult day for navigation. It rained all night and because of that all the tracks were gone making it really hard to find the way. I tried to ride smart managed to get into a good rhythm. Towards the end of the stage, my race GPS got bumped off so lost some time in putting it back but overall, I think I did a good job today."

Stage 3 will mark the first part of the two day marathon stage. The riders will not get any assistance over night in the Moroccan desert before showing completing the stage day after.