Jaguar F-Pace SVR comes with an enhanced chassis and aerodynamics that offer optimum performance. It's powered by a 5.0L V8 supercharged petrol engine. 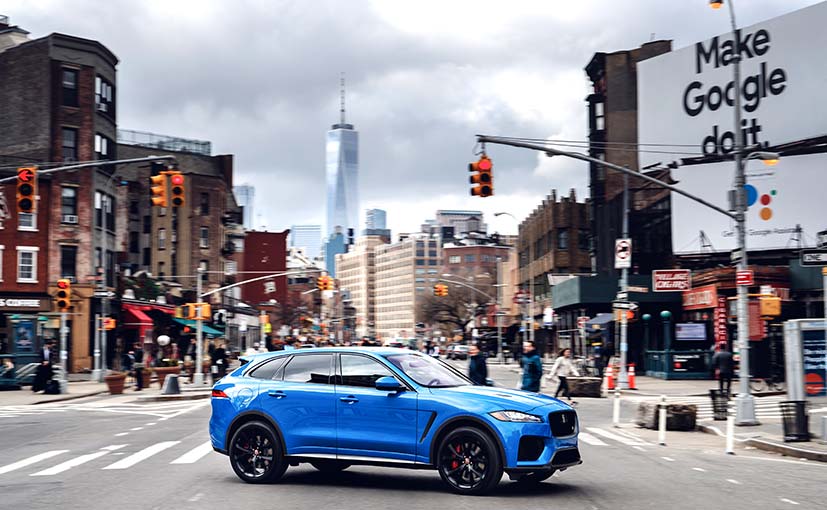 Jaguar Land Rover has finally pulled the wraps off the fastest and most powerful F-Pace yet - the Jaguar F-Pace SVR. The performance SUV is making its public debut at the New York Auto Show which kicks-off today. With the SVR treatment, this particular Jaguar F-Pace SVR comes with an enhanced chassis and improved aerodynamics that are said to offer optimum performance in all conditions. Engineered by JLR's Special Vehicle Operations (SVO), the new Jaguar F-Pace SVR comes with a 44 per cent increase in power output, compared to the standard F-Pace. 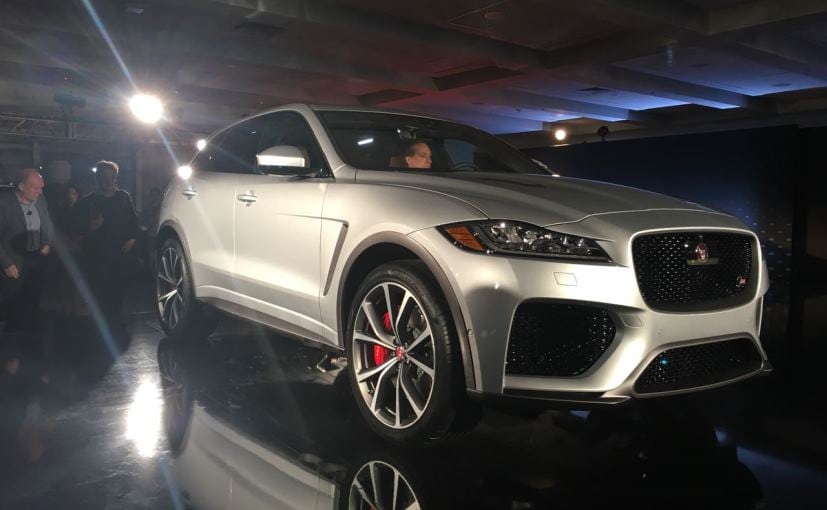 The Jaguar F-Pace is powered by a 5.0-litre V8 supercharged petrol engine that churns out about 542 bhp and develops a meaty 680 Nm of peak torque and comes with a Sport Shift Selector. The performance SUV is capable of doing a 0-100 kmph sprint in 4.3 seconds, before reaching an electronically limited top speed of 283kmph. The upgraded chassis has progressive front and rear springs that are 30 and 10 per cent stiffer respectively and incorporate an anti-roll bar specification that contributes to a 5 per cent reduction in body roll. 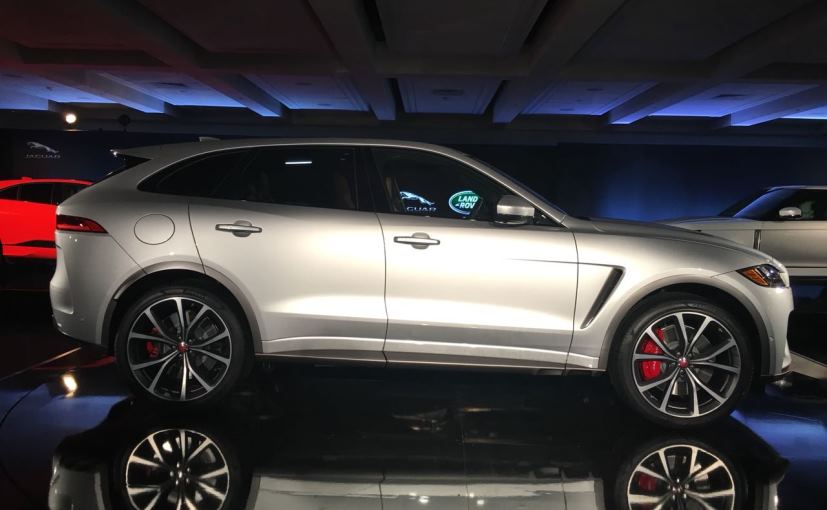 Jaguar F-Pace SVR has been engineered by JLR's SVO division

While the basic exterior design is pretty much similar to the standard F-Pace, there are several visual upgrades, some of them pertaining to the SUV's improved aerodynamics. The aerodynamic enhancements include larger air intakes up front along with vents on the side fenders that lower pressure in the wheel arches, reduce lift, and provide additional cooling while aiding in optimising high-speed stability. Furthermore, the signature SVR bonnet features vents that help extract hot air from the engine bay, while the new wheel arch extensions and underbody cladding give the F-Pace SVR an imposing low-slung muscular stance. 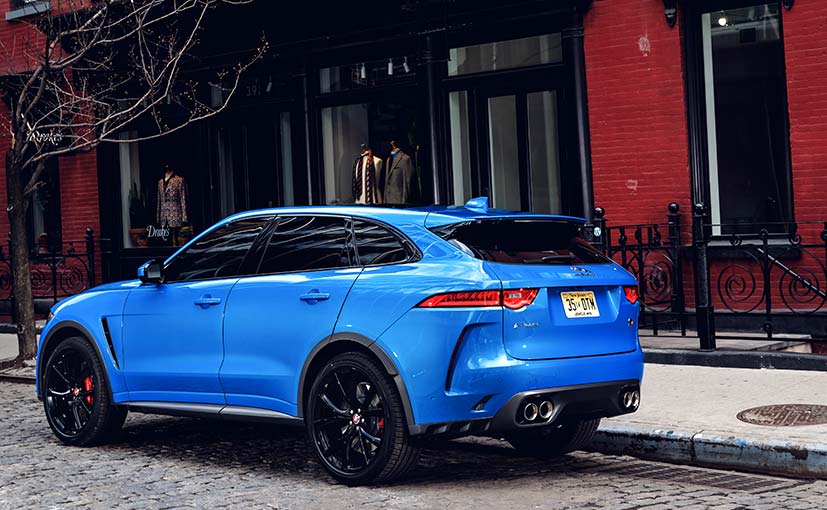 Jaguar F-Pace SVR is offered with a set of lightweight forged alloy wheels that come in two sizes - 21-inch and 22-inch, which are wider at the rear by 25 mm for better handling. The rear end of the SUV features a new bumper housing the quad tailpipes of the Active Exhaust system, while the side strakes aid in aerodynamic performance by smoothing airflow away from the rear of the vehicle. Furthermore, the SUV comes with a Variable Valve Active Exhaust System offering that beauty exhaust note associated with an SVR. 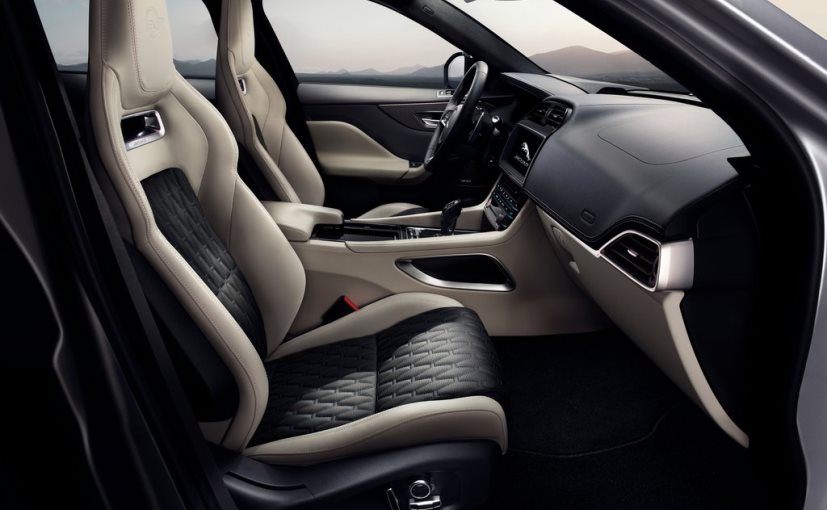 The cabin also comes with a host of updates including the new features slimline performance front seats with embossed SVR logo, while the rear seats are also designed to match the sporty character of the SUV. The cabin also features the SVR branded steering wheel with tactile aluminium paddle shifters. For in-car entertainment, the F-Pace SVR is equipped with the advanced Touch Pro infotainment system with 10-inch touchscreen and a 12.3-inch HD instrument cluster along with 4G WiFi that can take up to eight devices. JLR offers four different interior trim options - Red with Jet, Light Oyster with Jet, Siena Tan with Jet and Jet with Light Oyster stitching. 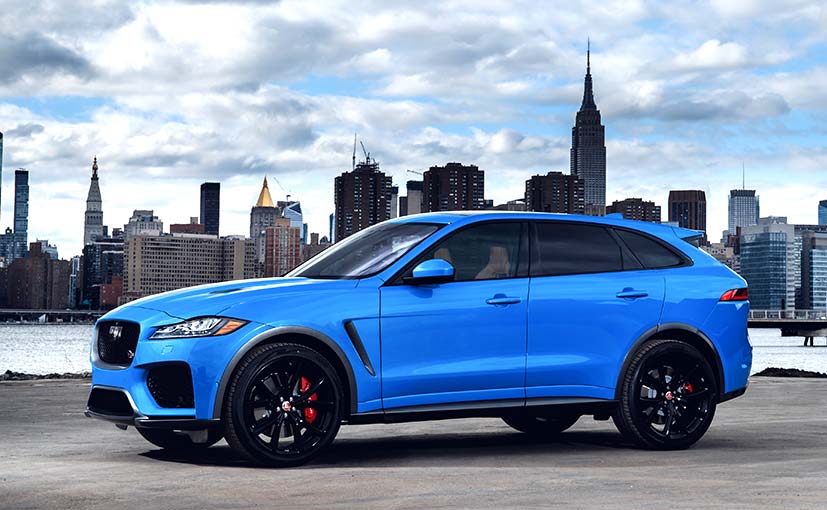 On the equipment front, the F-Pace SVR is the first in its family to get Jaguar's rear Electronic Active Differential (EAD), along with a range of advanced technologies like - Intelligent Driveline Dynamics (IDD), optimised Adaptive Dynamics suspension, Electronic Power Assisted Steering (EPAS) and Dynamic Driving Mode, all of which are bespoke to SVR. Engaging Dynamic mode initiates faster, more responsive gearshifts, sharper throttle responses and increased steering response for a more engaging driving experience in all conditions. The SVR also gets and all-wheel drive, all surface progress control and adaptive surface response.