The next-gen Hyundai Santa Fe looks a lot more sporty and well-equipped in the latest design images. Hyundai is expected to unveil the new-gen Santa Fe at the upcoming Geneva Motor Show 2018, in March. 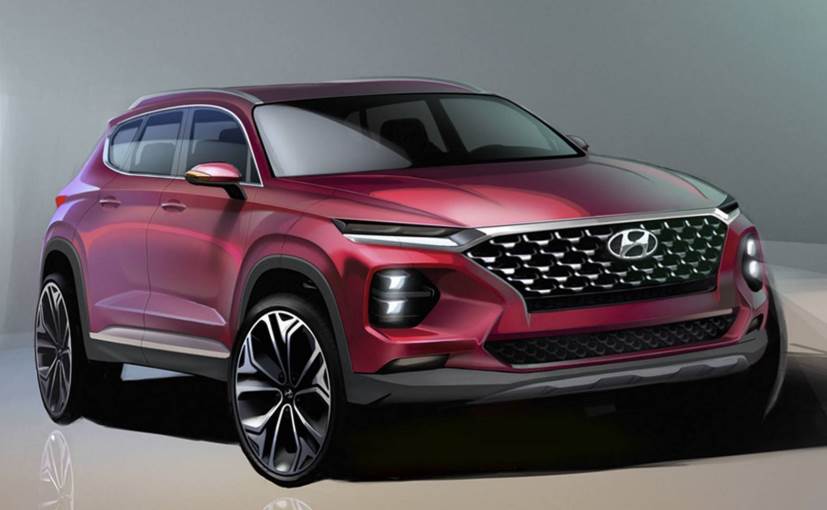 Just days after the first teaser image of the 2019 Hyundai Santa Fe was released, the South Korean carmaker has posted a couple of new design sketches of the new-gen premium compact SUV. Along with the teaser, last time, we had also shared a few spy images of the new Santa Fe undergoing cold weather testing and now, the latest design images have only made things interesting. The upcoming model will be the fourth-generation Hyundai Santa Fe and the SUV is expected to make its global debut later this year in March, at the Geneva Motor Show 2018.

While these are just design sketches of the new Hyundai Santa Fe, and the production model will look a bit different, based on the latest images we can tell that the new-gen model will come with a lot of sporty character. In line with Hyundai latest design language, the new Santa Fe will get the signature cascading grille design with a fat chrome line above it that connects the new LED lamps. The new Santa Fe will feature a Kona-like headlamp setup with slim LED daytime running lamps on top and large dual LED headlamps, housed lower on either side of the grille. There is a wide central airdam as well and bumper cladding and skid plate. 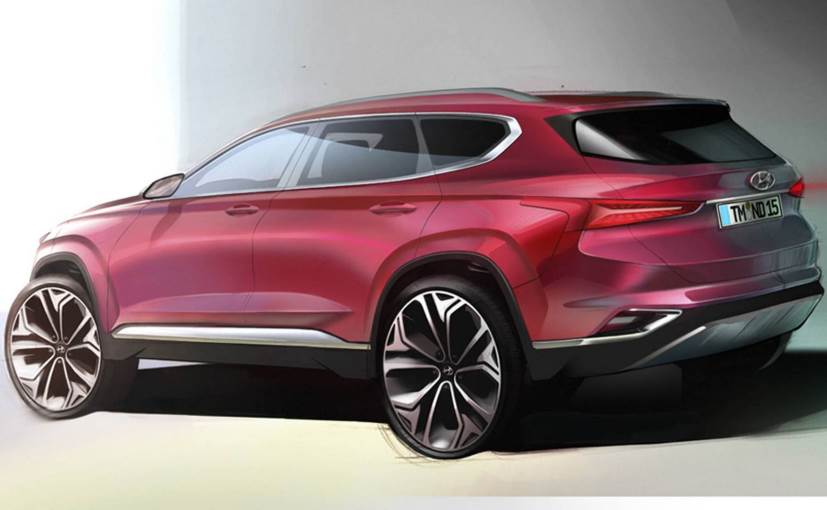 Hyundai has also revealed what the SUV looks like from the sides in one of the design sketches, uncovering some bold character lines, large wheel arches with underbody cladding, stylish alloy wheels and roof rails. The SUV will also come with chrome borders for the window and sporty-looking outside rearview mirrors. The images also reveal a pair of sweptback LED taillamps, a coupe-like rear, and muscular rear bumper with rear diffuser. The Santa Fe has also been spied testing a while ago and the teaser is in line with the test mule spotted. Other details will include a very distinct waistline and shoulder line and the distinctive twin exhaust tips.

On the features front, the new-gen Hyundai Santa Fe is promised to be the first ever car to get a Rear Occupant Alert system. The system detects the rear passengers and alerts the driver when they are about to leave the car and also alert rear occupants of oncoming traffic when they are about to leave the vehicle. Furthermore, the new Santa Fe also gets an upgraded version of the rear cross-traffic collision system that has been designed to stop the car in case the driver is reversing into oncoming traffic or an obstruction in cases of limited visibility.

While the engine details and other technical details are still unknown and we will get to know more about it at the official unveiling. As of now, the SUV is expected to get a 2.4-liter naturally aspirated four-cylinder, a 2.0-liter turbo, and a 3.3-liter V6 engine on offer.