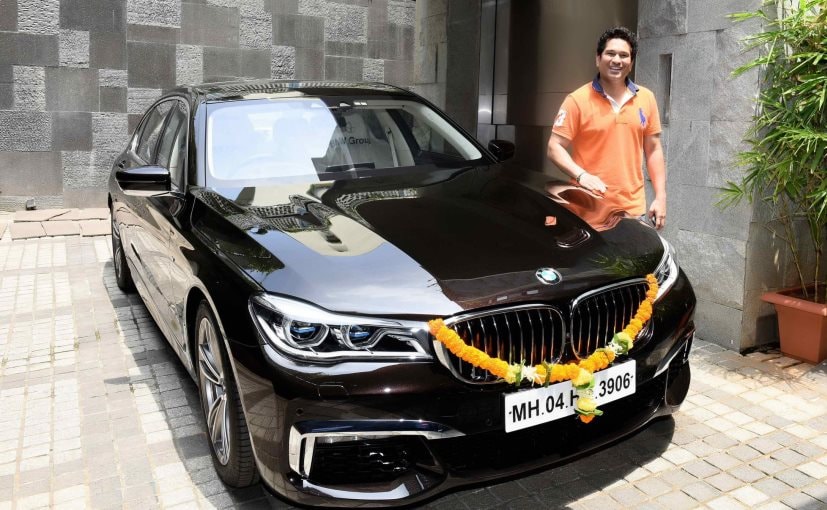 Adding to his already extravagant fleet of BMW cars, Cricketing legend Sachin Tendulkar has now become the proud owner of the all-new 7 Series as well. Like his previous 7 Series, Sachin's new BMW 750Li with M Sport package has been exclusively customised to his taste by BMW Individual, the carmaker's special customisation vertical. In fact, this is the second new BMW car for Sachin this year, who also recently added a customised BMW i8 to his garage.

BMW launched the new-gen 7 Series in India early this year at the 2016 Auto Expo, where Sachin himself introduced the car. The new generation model gets a larger and wider kidney grille with Active Aero function for improved fuel efficiency, bulging hood with neat character lines and a strong shoulder line running up till the LED tail lamps. The new model comes with Laserlight headlamps from the i8 adding to the oomph factor of the Bavarian saloon. With the addition of the M Sport package, the car gets a new sporty front bumper that gets heavy chrome accents around the air intakes and a more poised stance.

Other customisation features include the forged 20-inch V-spoke design alloy wheels that come with BMW Individual lettering inscribed on them. Similar distinctive lettering can be seen on the chrome strip connecting the two tail lights and on the illuminated door sills as well.

While we are yet to receive more details on the kind of customisation done inside the cabin, judging by the image, it comes with custom white leather interior with Sachin's logo imprinted on the headrest, similar to the one we saw in his previous 7 Series Individual. The car gets features like a new digital and customisable iDrive 5.0 infotainment system with touchscreen display, remote control parking assistance and gesture control along with an instrument cluster with 3D graphics that works in conjunction with a new HUD unit. The car will also likely get the 7-inch removable tablet with control of the car, ambient air freshener, heated door panels with integrated speaker along with heated armrest and more.

The BMW 750Li with M Sport package is powered by a 4.4-litre TwinPower Turbo V8 engine that is capable of churning out a maximum of 450bhp and develop a peak torque of 650Nm. The 8-cylinder petrol engine comes mated to an 8-speed automatic gearbox as standard, which propels the car to do a 0-100 km/h sprint in mere 4.7 seconds, before reaching a top speed of 250km/h.