The Road Safety Hackathon for school children included participants from grades 9th to 12th from the Delhi-NCR region. 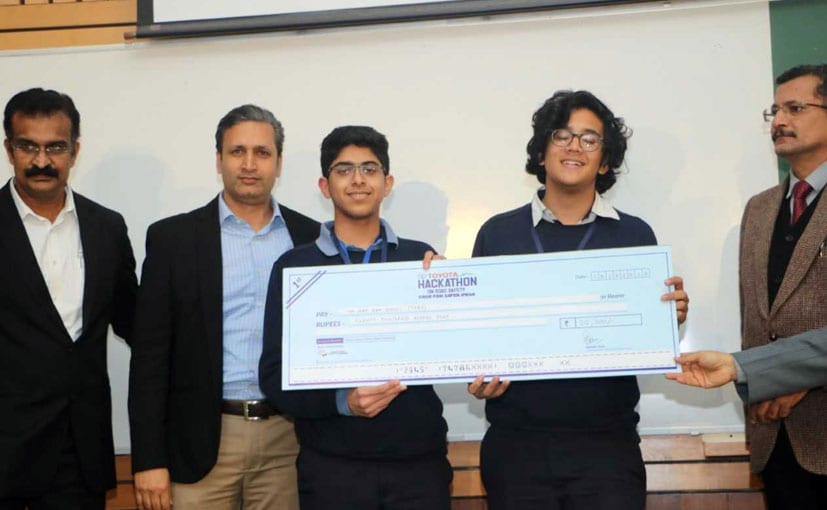 View Photos
The winners of the Hackathon event at IIT Delhi.

Toyota Kirloskar Motor has joined hands with Indian Institute Of Technology (IIT), Delhi to drive a road safety mission- Hackathon initiative which aims at incubating ideas of young minds to support the national mission of 'Zero Fatality'. Over 180 teams which include over 370 students from more than 100 schools from the Delhi-NCR region have participated in the road safety campaign. The students who have been allowed to register for the road safety mission are from grades 9th to 12th who have worked in association with Indian Road Safety Campaign (IRSC), an NGO formed by IIT Delhi.

The event is categorised into three-dimensional themes- educate on driver behaviour, enforcement on fraud detection, and infrastructure to build good roads. The educate drivers program will integrate devices into both commercial and private vehicles which will caution the driver when they drive rash or are fatigued. The fraud detection program will keep a check on faulty driving practices such as underage driving and driving under the influence of alcohol. And the infrastructure to build good roads aims at improving the road conditions by using some feasible digital technology which will help to enhance efficiency besides reducing the number of accidents. Toyota has further incubated the ideas given by students to develop a concrete solution to support road safety.

The top performers of the hackathon initiative were selected by a jury which constituted people from Media, UN Organization, corporates, Government representatives, enforcement agencies (Police), Academicians and Toyota experts. The top ten participants and best three were given trophies and cash prizes. Speaking about the initiative, Naveen Soni, Vice President- Toyota Kirloskar Motors said, "At Toyota, we strongly believe in growing with the society. While primarily we are car manufacturers, our focus also remains at enriching lives of the community around us.  Safety has been our focal point and resides in Toyota's DNA. We began our journey on the awareness program on road safety since 2007. This initiative is one of its kind, as this is an amalgamation of technology aiding the cause of Road Safety. With the best of the young minds from the country with the support of IIT students & faculties coaching and mentoring the students, we are trying to develop implementable solutions which can help to address serious concerns we face on the Indian roads today. Children are the future of our country and it is pertinent to involve them at this stage as it helps inculcate responsible driving and safe behaviour on the roads."

The Japanese carmaker has been organizing the Toyota Safety Education Program (TSEP) since 2007. The safety program aims at educating school children on road safety across India and it has educated over 700,000 school children about road safety so far. The 'Safety Model School' is a part of 'Team Toyota activity' (TTA) which works to educate school children, teachers, parents, school vehicle drivers about road safety habits. Till date, Toyota dealers and suppliers have rolled out this program in Delhi, Kochi, Varanasi, Hissar, Rewari and Kolkata.