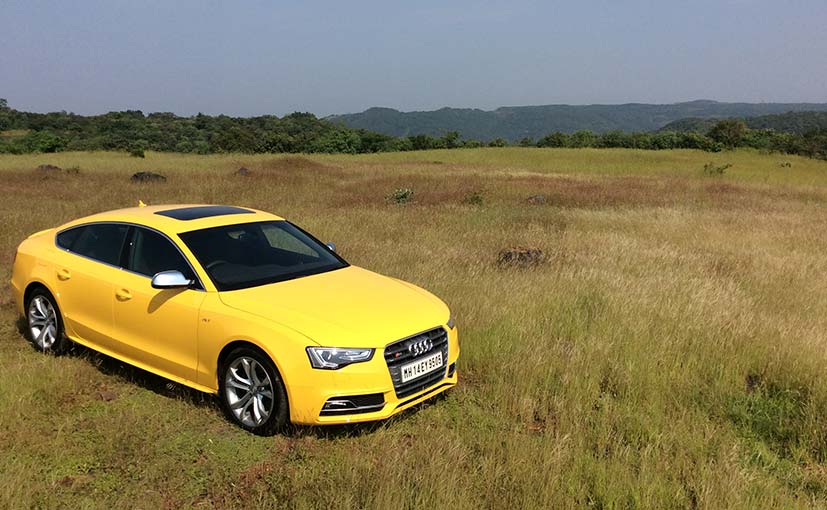 It was a typical morning and clearly I was in no mood to head to work; you know just one of those days. The morning blues got the better of me and I trundled down to head to a usual work day but there was something yellow in my parking lot that put a smile on my face. Well, the smile rubbed off on quite a few people who woke up early for their daily dose of fresh air and exercise as I turned the keys to the ignition of the Audi S5 Sportback. Draped in yellow, the S5 was prepared but was I?

Considering that the A5 has always been my favourite Audi in terms of looks, the S5 looked pretty and given that it's a sedan, offered the same functionality. The S5 then is a practical sedan, it's got five doors, a big boot and seating for four individuals but what makes it different from the normal version is the changes it receives as part of being in the 'S' league of cars.

The 'S' brand of cars are performance cars but not as powerful as the 'RS' versions. They fall between the regular cars and the high performance ones but that does not mean you underestimate it for a second. Audi has done a lot to make it look sporty and hence you see the extensive use of chrome on the exterior. The front sees the radiator grille's platinum grey insert with horizontal chrome struts while the honeycomb grille in the air inlets with dual chrome trim and angular fog lights add to the sporty dimension of the car. The exterior mirror housings get the aluminum look, which on the yellow looked a bit out of place. It also comes with body coloured door sill moldings and an integrated rear spoiler. 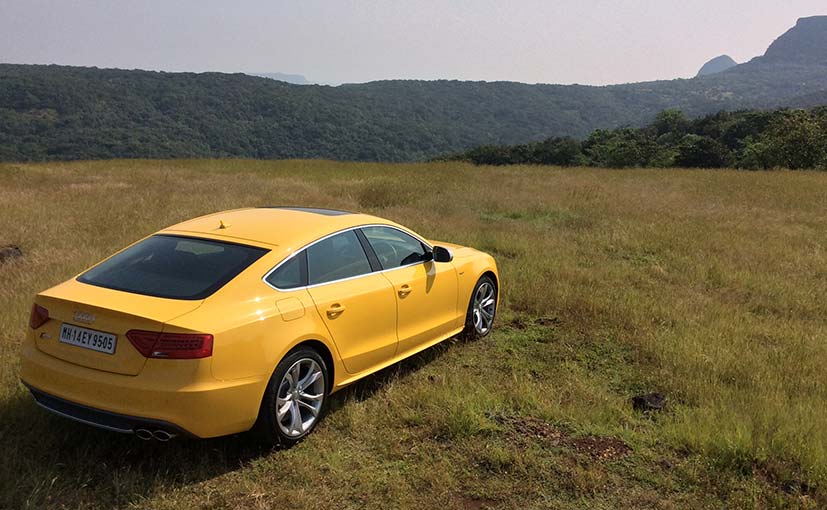 Most of the S5 otherwise remains unchanged from the standard A5. The car's chassis still boasts of the same MacPherson strut at the front with a torsion beam at the rear but the 'S' badge governs some change and Audi has made it electronically adjustable. You can just go into the Audi Drive select mode and choose anything between Comfort, Auto, Dynamic, Efficiency and Individual and this helps you select between soft and stiff suspension, depending on the driving conditions and prepares you for whatever mode you're ready to incorporate. While the other modes are self-explanatory, the individual mode is where you can set parameters and this is where Audi spoils you for choice.

For me the choice was a simple one in morning rush hour traffic, I switched to comfort mode where all was calm and collected and there was not a minute that I thought that I was driving an Audi with an 'S' badge. Soon, the highway was just around the corner and I switched to Dynamic mode, which was more like unleashing Hulk from under the bonnet - a yellow hulk mind you. Suddenly, all the maths behind making it a tad bit more powerful made sense. The supercharged 3.0-litre V6 poured out the 333bhp as if it was in a hurry and thanks to the Quattro all-wheel drive system, all the power was channeled through all the four corners which just made it that much effective and immediately had me smiling from ear to ear. In Dynamic mode, you get a bit of an exhaust note, which though not as vocal as you might want it to be, is fairly audible. According to Audi, the S5 is capable of going from 0-100km/h in just 5.1 seconds and tops out at 250km/h and we can say for a fact that when you enter the world of the three digit number, whichever the driving mode, the S5 never loses its composure. 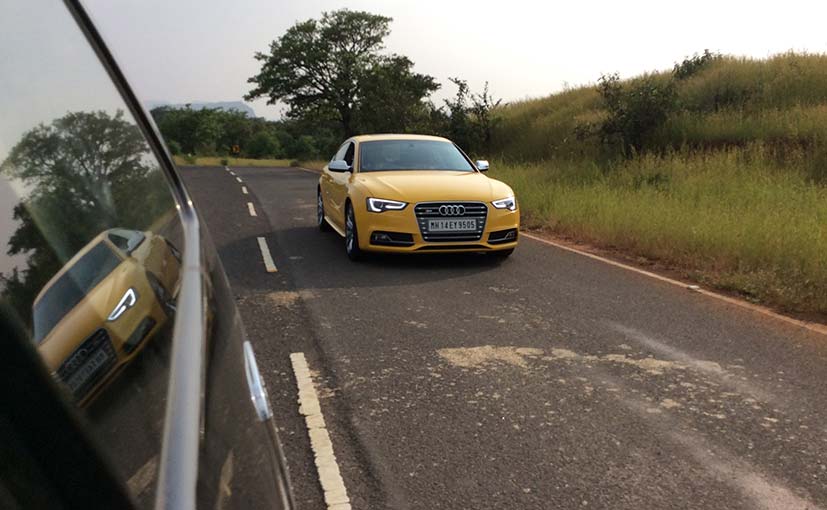 The stiffer suspension and the wide frame of the car gives you the confidence to push it along sharp turns and it holds its line when you point and shoot. The S-tronic 7-speed gearbox helps in providing you power at will and that is clearly the master stroke of this car. The shifts are precise and this makes power delivery even better and thanks to the massive 440Nm of torque on offer, you have no problems applying the brakes, down shifting and then going hard on the throttle and pick up the gears again. All this might happen within a flash of a second but that's how reactive the gearbox is.

There is something interesting here as well, because the braking system of the S5 comes with an energy recuperation system. It's used by the alternator to store kinetic energy which is converted into electric energy in the battery which is then later on used by the alternator. Thanks to this process, the engine does not carry all the stress which makes it close to 3% fuel efficient. The S5 consumes 8.1 litres per 100 kilometres and that's quite sufficient for a car that wants you to drive it like a maniac. 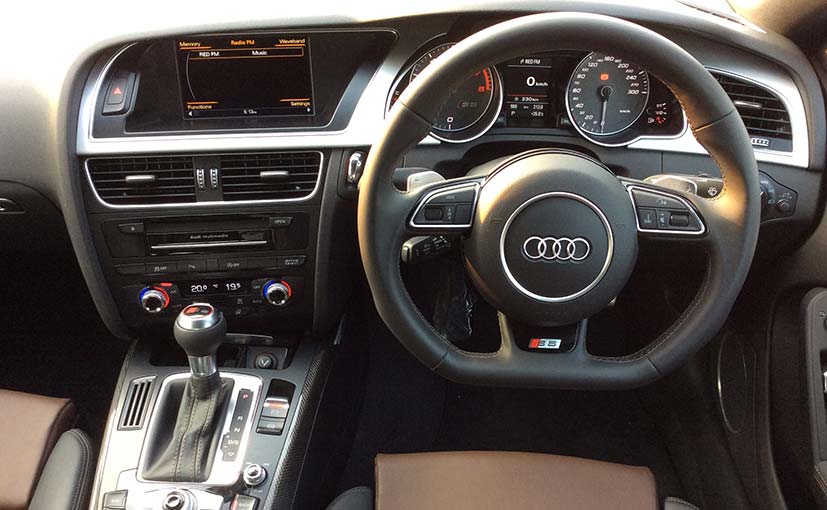 Inside is quite familiar but there are some unique touches that make it special. The matt brushed inlays add sportiness and sophistication to the cabin. Yes, there is a flat bottomed steering wheel as well which comes equipped with controls to the music system, Bluetooth and of course there are paddle shifters that come attached to it. The seats are draped in Alcantara upholstery and you have the option of choosing the S sport seats in the front which come with S5 embossing.

Besides that it also comes with a Bang & Olufsen Sound System and an MMI Navigation Plus with a 17.78 centimeter colour monitor which comes with 3D navigation mapping. Other features include, the Audi Parking System Plus with a rear-view and 8 airbags. Audi launched the S5 just last week and it comes at a price tag of ₹ 62.95 lakh (ex-showroom Delhi) and currently doesn't boast of any rivals in this segment. 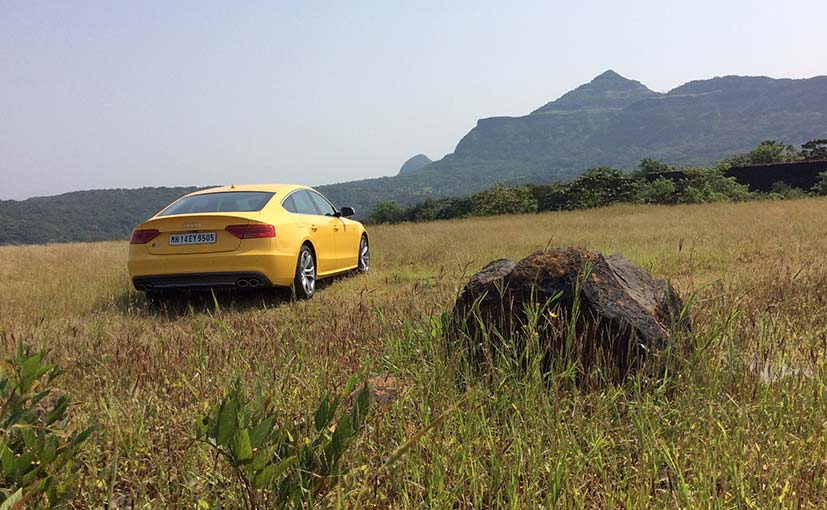 The S5, then is in a league of its own and just like the Hulk, it changes its tune to become aggressive and assertive at the switch of a button. It's a car which you can take to work, then to the track and then shopping with your family and then you can go back home, tuck it in and repeat the same procedure the next day. It's amazing how happy this car made me feel at the end of the day; the yellow drove away my blues!