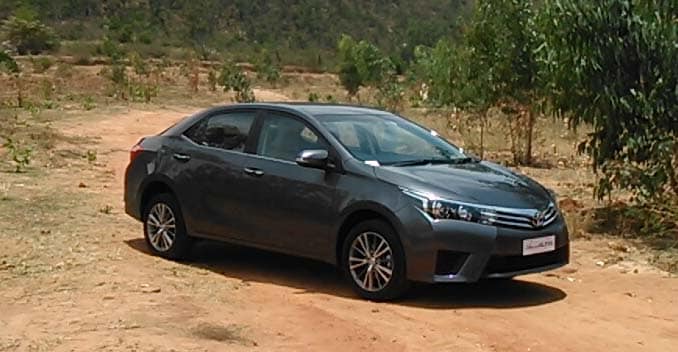 A Toyota like you've never seen before! You initially think this is quite a tall claim for a car that's a best-seller around the world, but the 2014 Corolla Altis does make a whole new impression the first time you set eyes on it. The 11th generation model has taken its time to reach Indian shores and during this time, the Indian D-segment sedan space has gotten more formidable. The new Skoda Octavia, Hyundai Elantra, Chevorlet Cruze and the VW Jetta has made quite an impression on the Indian buyer. Each of these cars have USPs going for them - from new platforms to spec sheets that suggest a feature-rich package! So, does the new Corolla packs in enough to grab the attention of car buyers?

Unlike the previous generation model - which borrowed heavily from older versions - Toyota has gone the extra mile to give the new Corolla a sportier and premium image. The new aggressive design gives the Corolla more confidence in its stance. The sportiness is accentuated by strong lines, sweptback headlamps and a longer wheelbase. The smiling chrome grille with the LED headlamps and the sporty bumper with the sleek fog lamp housing add to the character. The profile and the rear look just as good and sporty as the front and the new Corolla uses 16 inch alloys for added appeal. There are people who say that the edgy design makes the car bear some resemblance to the Honda City, but we have to admit the dynamic design language on the new Corolla works and Toyota will be encouraged to be bolder in their future designs. 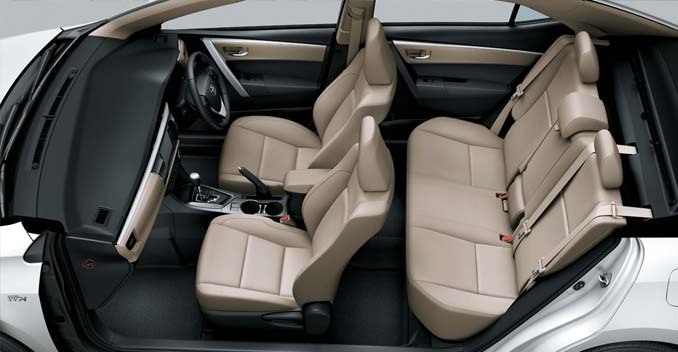 There is also a serious effort to give the interiors of the new Corolla a more premium design than the outgoing model. The dashboard layout is neat and layered with a 7-inch touchscreen infotainment console in the centre. On a sunny day, the screen suffers from too much reflection and hampers the display output from the rear camera. The rectangular air vents are well placed with a digital clock in the middle. The steering mounted controls look a bit dated but are easy to use. Behind the wheel, the instrumentation cluster is neat and bright with a digital display in between the dials. Overall fit and finish are a big improvement but Toyota probably could have done more to match the likes of the Octavia and the Elantra. The lowered seating position in the new Corolla gives a sporty feel and the driver's seat is 8-way electrically adjustable. Rear passenger comfort has been given attention in the new Corolla with features like reclining seats, reading lamps and some extra legroom thanks to the 100 mm increase in the wheelbase.

Our planned drive with the new Corolla in Bangalore was relatively limited; maybe Toyota assumed that the petrol and diesel engines were familiar to us from the outgoing model and so the idea was to keep the drive short. We first drove the 1.8-litre petrol engine with the 7 Speed CVT gearbox which has been tweaked for a smoother drive and better fuel economy. The maximum power on the new Corolla Altis is at 139bhp@6400rpm and peak torque comes in at 173Nm@4000rpm. The engine is extremely refined and the power delivery is linear and smooth without the rubberband effect from the CVT gearbox. The new steering mounted paddle-shifts add an element of fun to the drive and the new Corolla shows that it can be as sporty as it looks. Don't get carried away though as pushing the engine too hard might not be such a good idea. But the petrol automatic has enough to make you smile as you amble in city traffic and enough power to cruise on the highway. 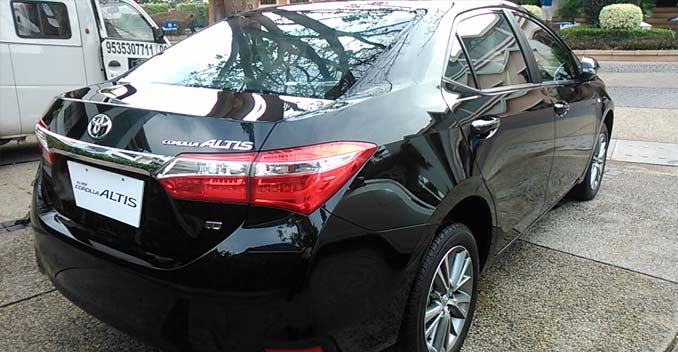 The diesel Corolla gets the 1.4-litre VGT engine which is also carried over from the previous generation. This engine has proven to be reliable but feels underpowered and a bit noisy. The 6-speed manual transmission needs some work to get the power going - all 88bhp of it which it develops at 3800rpm. Peak torque of 205Nm comes in between 1800-2800rpm.

But the new Corolla feels more confident to drive from the previous generation with the electric power steering getting responsive and solid handling. The suspension setup works well with the car handling the poor roads in the city and not flinching at high speeds. But the overall driving dynamics still falls short of its European competitors especially the Skoda Octavia which offers a more solid experience. Driver and passenger airbags come standard across models but the Anti-lock Braking System (ABS) with Electronic Brake Force Distribution (EBD) and Brake Assist (BA) comes only on the diesel variants and top-end petrol variant. Compared to the previous generation model, the diesel variant now gets all the features available on the top-end petrol variant to justify the price difference.

Toyota might have made headway with the latest Corolla Altis especially with its brand new bolder design and addition in features. But they could have pushed the envelope a bit further. The car will be launched in 5 petrol and 4 diesel variants by the end of May and expect a hike of ₹ 50,000 in prices from the outgoing model.