The Hyundai i20 and the Kia Rio, are very European, offering great looks, space, good ride and overall driveability, and decent value. 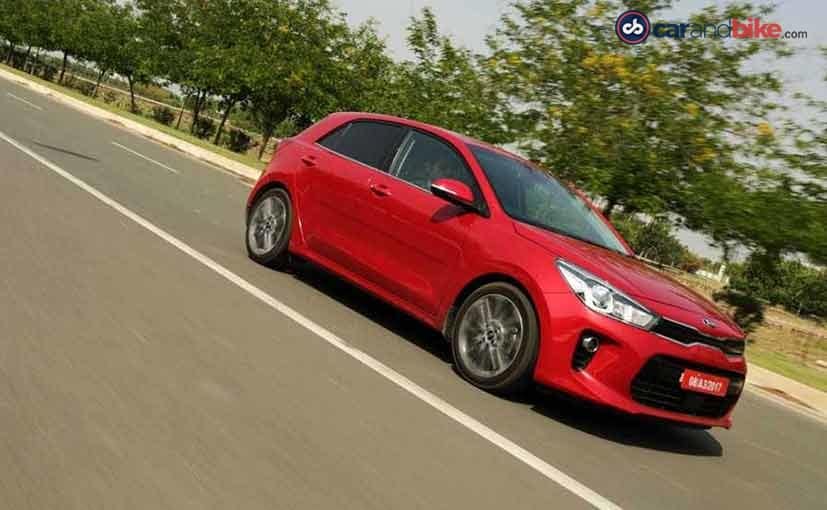 At the outset comes my disclaimer, that while I have now driven the Kia Rio extensively in India, this car is not an India-spec or even confirmed for our market. So why am I driving it then? Well that is simply because I believe it is one the most relevant models in the Korean company's global line-up, and deserves some attention. If you agree, read on! The Kia Rio is a premium hatchback that is now in its 4th generation. A popular model for Kia in Europe it is also sold in a sedan bodystyle in the US. And the car is indeed brand new, having just made its global market debut earlier this year. So, to set the context for you, the Rio is a car that shares its platform with the Hyundai i20. Same platform and powertrain options, but in terms of styling you can see that they couldn't be more different. The Rio with me is not redone for the Indian market, and so in its European spec, sits slightly lower than the i20. But take a look at the proportions, and you start to understand what the Rio is all about. The Hyundai i20 and the Kia Rio, are very European, offering great looks, space, good ride and overall driveability, and very importantly - decent value. The i20 also just received its mid-cycle facelift - which India got ahead of the rest of the world - at the Auto Expo in February. We have already reviewed the car for you, and you can read that review here: Hyundai i20 Facelift review. 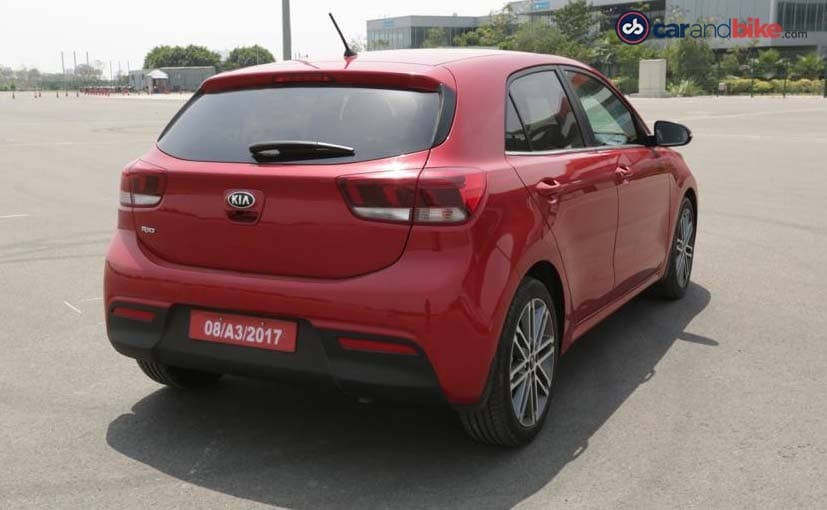 The rear of the Kia Rio is simple but very contemporary

Also read: Hyundai launches i20 facelift at the Auto Expo

Yes I know that the Maruti Suzuki Baleno outsells the i20, but in many ways it is still the segment benchmark car for us in India in the premium hatch segment. And the Rio can also be just that. If positioned right, with the correct amount of premiumness and number of features, it can threaten the i20's status. And it's not just because of its sexy looking face and overall stance! Kia's cars have gotten so much more attractive off late, and you have Peter Schreyer to thank for that. This car is also designed by Kia's design chief and has the signature tiger nose grille. If this car was to be launched in India, it will likely sit a bit taller for Indian road conditions - a pity as the current hunkered down stance looks rather lovely. At the back there is a little sense of drama with the flamboyant taillights - simplistic and yet very modern. So it is rather obvious, that the Rio is a looker, and will beat the Baleno and Jazz on the beauty sweepstakes. But its overall proportions and profile are a bit predictable, and it also lacks the muscle of the i20. Having said that I am not doing a comparison review here, lets be clear! 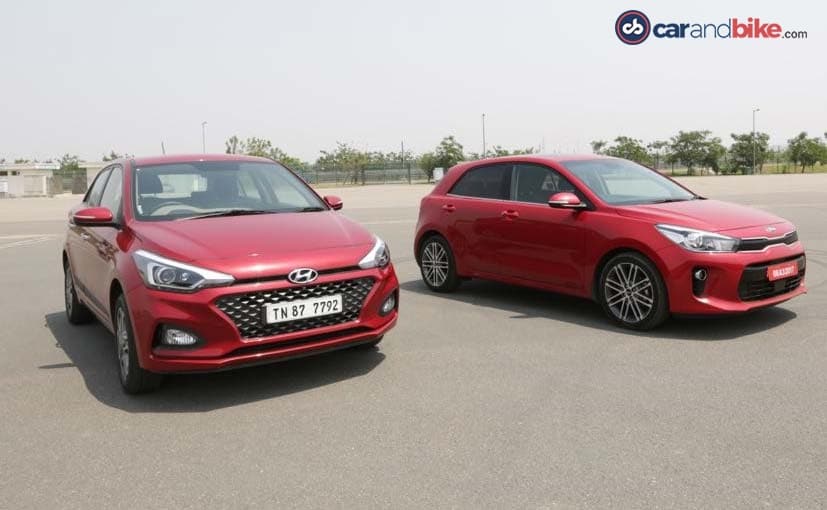 Where the Kia could also score were it to come to India is on the interior, which in styling terms alone is certainly fresh for the segment. The plastic quality and the way the dash has been moulded add some panache to the way it looks. The all-black treatment on my test car really works well, though it would obviously need a bigger touchscreen than the one I see here, for it to scream premium in our market context. And that would need to be further studded with Apple CarPlay/Android Auto and navigation. That said, in the mass car space simply lifting up the quality of plastics and the overall finish does wonders to the impression you carry of it. The Rio does that amply well. The cabin is sexy, young and very different then. Nice! And that's where the i20's cabin - also recently refreshed (and much better loaded in the top spec I have with me today) - would still seem predictable. The i20's cabin does come across as much roomier though, which could be a slight weakness for any proposed entry to this segment by Kia. 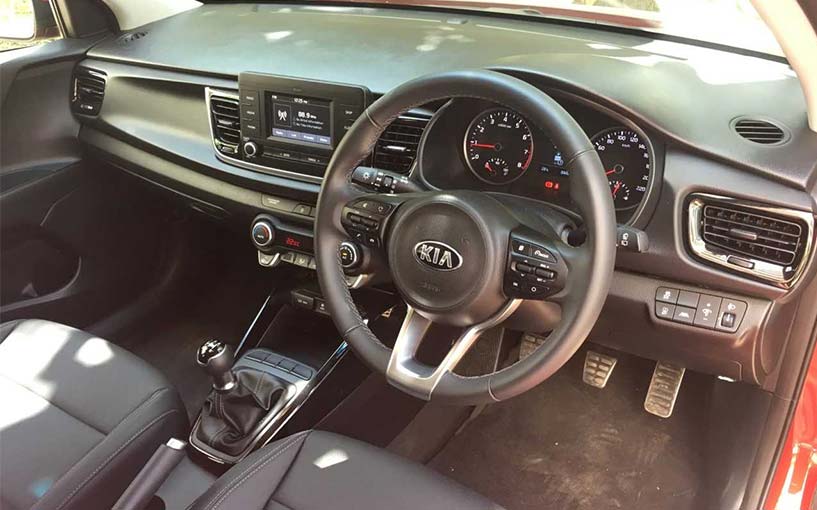 Now I know you're asking - how does it drive? After all sharing a platform with the i20 would mean the performance would be familiar, right? Globally the Rio comes in several engines - a 1.0 and 1.2 Kappa, 1.4 and 1.6 Gamma and a 1.4 turbodiesel. Interestingly I am driving the car with the same 1.2 engine we know already from the Grand i10 and i20. So it is all kinds of familiar. I am not going deep in to performance per se, simply because it's not that this car is launching in this spec in India. I will tell you this though - the ride and handling (and especially that ride quality) really have me very impressed. This could work really well as a key differentiator in the Indian context too, I believe. The i20 also has a European character on the road - a bit of a USP on the second-generation car. The facelift has retained that character and only claims to offer more by way of acceleration and efficiency. So the Rio with its similar powerplant should be able to match that offering almost to the T! 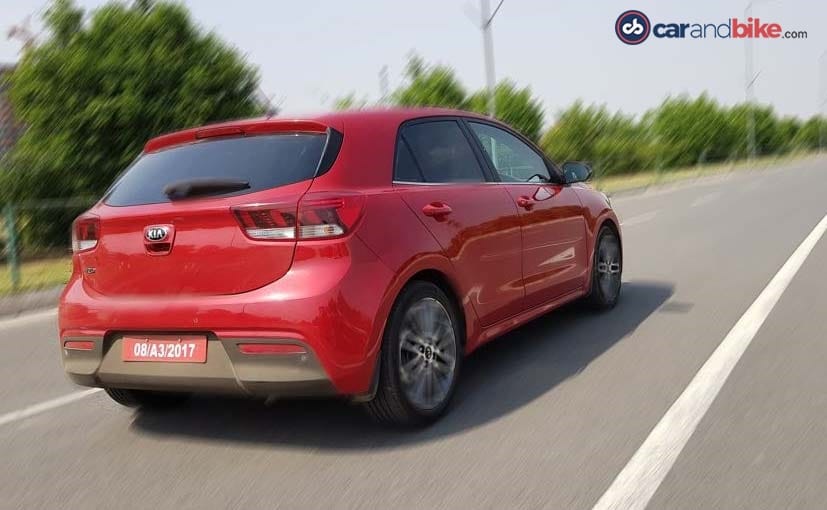 So sportier ride and handling may have me impressed but that's because this car is European spec, and honestly not going too far from that may well help create a new paradigm in this market too. And that is why it is my belief that the Rio is right for India. Even though Kia plans to begin its India innings with a compact SUV based on the SP Concept, quickly getting in to the premium hatch space would also be very logical. The Rio has the goods to make that pitch in my opinion. The latest Rio was never launched in Korea - its home market - and instead they have the Rio based Stonic crosshatch. But having them both selling side by side with possibly the Rio sedan also, could well be a great business case for India. Now the question is - do you agree? And does Kia?