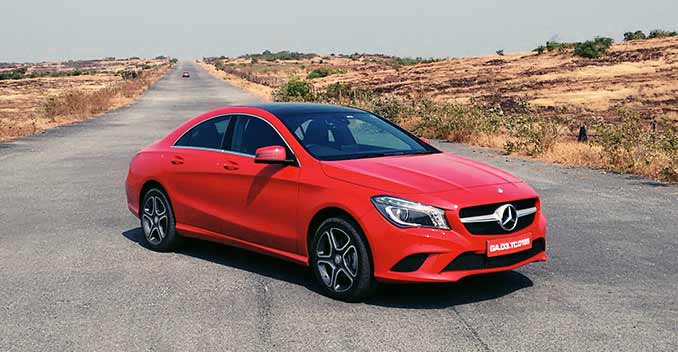 She looks stunning with lots of oomph and knows how to make heads turn; say hello to the gorgeous new Mercedes-Benz CLA: almost the perfect car to kickstart 2015 with for the German car maker. Unveiled as a concept at the 2012 Beijing Auto show, the production version of the CLA was first rolled out in mid-2013. It looks similar to the concept and also fits the bill for Mercedes-Benz's agenda to strengthen their entry level portfolio across the globe with the A-Class, GLA and now the CLA.

Call it an A-Class with a boot or smaller version of the CLS, I am sure the CLA won't mind since both of those cars are very attractive. That said, the CLA still manages to hold it's own with its design. The nose of the car is slightly similar to the A-Class, in addition to the bi-xenon headlights with the LED daytime running lights and three sweeping lines on the side to give it a sporty and bold appeal. This coupe style sloping roofline, though looks a bit cramped for the rear passenger, underlines how aerodynamically sound the car is. Add to that, the reduced drag and you have a fun drive right ahead of you.

Even the attractive Audi A3 doesn't seem to have that flair that the CLA offers in it's design. The rear doesn't look too stubby with the swooping all-LED tail-lamps. The 17-inch alloys also add to the sporty character although the car sits with a slightly increased ground clearance. Then there's also the wheelbase of 2699mm, which is more than that of the Audi A3 and translates to more space on the inside.

Get inside the CLA and you are greeted with the familiar sight of the stylish A-Class dashboard. Jet propeller type air vents, sporty twin tube dials for the driver. Interiors are available in dual-tone or all-black, and the plastic used inside the cabin is pretty good too though not as top-notch as one expects from Mercedes-Benz.

But what we really liked was the new infotainment system on-board the CLA with the latest software loaded on it, which meant a smoother user interface and a new navigation system which uses an SD card for the data. Also, the panoramic sunroof that automatically shuts when it detects rain does help make the cabin feel a bit more roomy. The sporty racing-type front seats with the integrated headrests feel quite comfortable while the frameless doors add to the premium sedan feel.

Now as we expected, the rear row of the CLA does feel a bit cramped, especially in terms of headroom. The smaller windows don't help its case either. However, the legroom is fairly decent with the increased wheelbase. It also gets rear AC vents for comfort, but the transmission tunnel means that the rear can accomodate only 2 adults and a child at the max.

The boot space is quite generous at 470 litre, but then there is the spare tyre too. You can fold the rear seats in the 60:40 split, thus giving you that extra luggage area.

When Mercedes-Benz decided to bring only one petrol - the CLA 200 - and the diesel CLA 200 CDI, I was a bit disappointed since there are far more powerful engines available in their global portfolio. But now I don't feel as bad because the CLA 200 CDI does have quite a bit of punch, lots of torque and doesn't get too noisy at high-speeds, thanks to the great insulation inside the cabin.

The CLA is powered by the same 2.0-litre turbocharged and peppy petrol engine that also does duty on the GLA-Class. It puts out 181bhp and 300Nm of torque and comes mated to a 7-speed dual clutch gearbox.

The diesel engine is a 2.1-litre turbo motor churning out 134 bhp and 300Nm of turning power and gets the same 7-speed dual clutch gearbox.

Out of the two, the petrol was easily our pick for its sporty and peppy drive. The diesel, on the other hand, offers a more cruising type of driving dynamics. But the reason why the CLA put a a big smile on my face is because the car really surprised me with its ride quality. The suspension is well-tuned and doesn't feel too stiff and takes in large speed-breakers or potholes. It doesn't seem too unsettled and that's a big plus for the CLA.

There is a hint of turbo lag in the diesel but unleash it on the open road and the CLA cruises with great ease. The CLA gets three driving modes, namely, Economy, Sport and Manual with paddle shifters, thus adding to the fun. The front-wheel drive CLA handles fairly well and manages to hold it's line even around corners. The steering isn't the most responsive though but feels a bit heavy, keeping the driver engaged.

Mercedes-Benz says it has sold over 100,000 units of the CLA in Europe and the US since its launch in April, 2013. Here's the interesting part - 80% of the customers in the US were new customers who hadn't owned a Mercedes-Benz before. So the German carmaker is hoping the CLA will bring in new customers and hence, in anticipation of large volumes and better pricing, the company will assemble the CLA in India. Although intitially it will arrive in the country via CBU.

So yeah, all eyes will now be on this red-hot beauty when it launches later this month. We expect Mercedes-Benz to stay aggressive with the pricing with prices starting around Rs 28 lakh - Rs 30 lakh. This should be a fun start to the year as the German big boys battle it out for pole position this year in the Indian market.