The Hyundai Santro is 30 mm shorter than the Santro Xing which was discontinued in 2014. 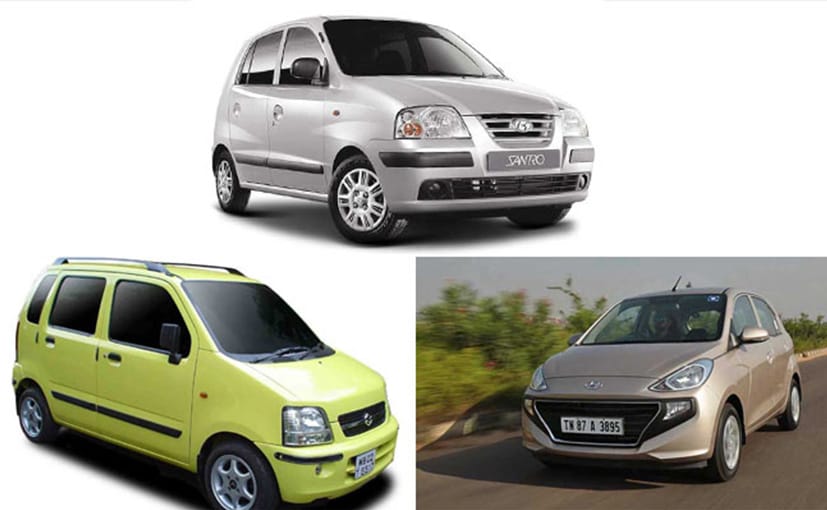 View Photos
The new Hyundai Santro at 3610 mm is longer by 45 mm than the predecessor.

The 'Tall Boy' lingo has always been associated with the Hyundai Santro ever since it was launched in 1998. A year down the line, the Korean carmaker started calling it the 'real' tall boy. Perhaps that was to answer Maruti Suzuki which launched the WagonR in 1999 and was also marketing it using the same adjective. Agreed that Hyundai was the pioneer, but the WagonR was taller by a good 100 mm. Fast-forward to 2018, Hyundai is still claiming that the Santro is a tall boy but the figures tell us otherwise. The new Santro has grown horizontally but it's a different story altogether when it comes to the height.

The height of the 2018 Hyundai Santro has been reduced by 30 mm compared to the Santro Xing which was discontinued in 2014. The new Hyundai Santro stands 1560 mm tall while the Santro Xing was 1590 mm in height. Besides, the new angular design language and a slightly sloping roof-line very well deceive the tall boy stance of the new Santro. That said, the new Hyundai Santro at 3610 mm is longer by 45 mm than the predecessor and we are not complaining about the sense of space inside. The legroom is class leading in its segment and headroom is ample; something we've talked about in our review at length. Even the design is winsome and purposeful, just that it's no more tall-boyish in silhouette.

Overall, certain design elements on the new Hyundai Santro do catch attention. For starters, the new smiling face carries the cascade family design and the wide black grille with chrome fringes looks adorable.  The character lines on either sides of the bonnet enhances the muscles in a subtle manner but we feel that the boomerang shaped design element just after the front fender doesn't really add much to the overall design. The rear of the new Hyundai Santro looks comparatively edgy compared to its face, however, the tail lamps could have done with a better design.

The new Santro is based on Hyundai's all-new K1 platform which the company claims is lighter and 63 per cent more rigid than the previous platform making it robust enough to meet the upcoming safety standards. carandbike had also exclusively reported that this new platform will underpin all the upcoming sub-compact models in the Hyundai line-up including the Vitara Brezza rivalling sub-four meter SUV (codename QX1) and next-generation Grand i10 which is under testing.