The Aprilia SR 150 will come equipped with a single-channel ABS unit and new MRF tyres, and a price increase of almost Rs. 10,000 over the non-ABS versions. 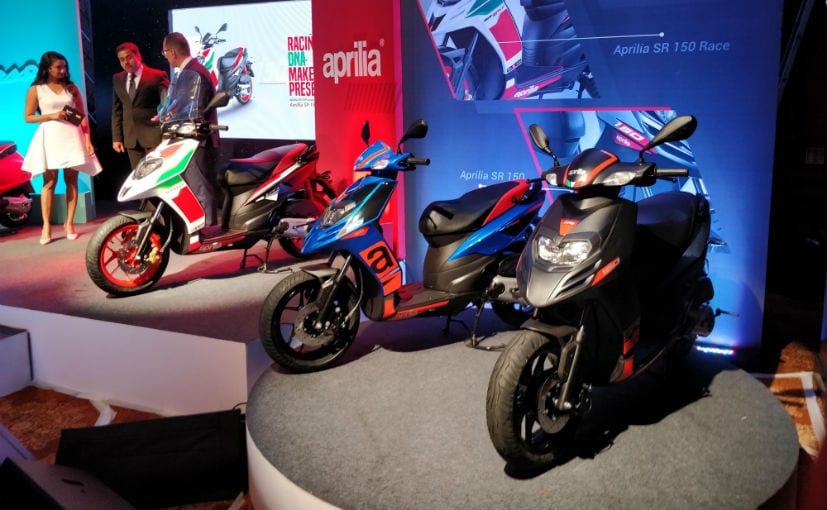 View Photos
Deliveries for the Aprilia SR 150 ABS will begin by mid-January, bookings are now open

Piaggio's Aprilia SR 150 has earned a reputation of being a fun 150 cc scooter in the market and the model is all set to be updated with ABS in January 2019. The Aprilia SR 150 ABS will start arriving at dealerships starting next year and bookings are already open for the updated model. The Aprilia SR 150 willl now come the single-channel ABS system with prices starting at ₹ 82,000 for the standard version, while the SR 150 Carbon is priced at ₹ 83,000; whereas the range-topping Aprilia SR 150 Race is priced at ₹ 88,000 (all prices, ex-showroom). That's a hike of almost 10,000 over the non-ABS versions. Earlier this year, Piaggio had introduced the refreshed versions of the Aprilia SR 150 and the Vespa range in the country with new connectivity features and colour options

Apart from ABS, the Aprilia SR 150 will also come with new MRF tyres in place of Vee rubber that has so far been a good performer on the scooter. No other major upgrades are expected on the scooter that draws power from the 154.8 cc single-cylinder engine that churns out 10.25 bhp and 11.4 Nm of peak torque. The motor is paired with a CVT unit. On the Race version, the SR 150 gets an optimised gear ratio for faster acceleration at low speeds. The scooter comes with telescopic forks up front and monoshock absorber at the rear. Braking performance comes from a disc at the front and a 140 mm drum brake setup at the rear.

With the price hike, the Aprilia SR 125 becomes a more lucrative option priced at ₹ 66,169 (ex-showroom), and continues to be the entry-level offering in the Aprilia range. As per the mandatory rules, the 125 cc scooter will come with Combined Braking System (CBS) as standard starting April next year.

Piaggio will also roll out the Vespa VXL 150 SXL, VXL 150 and Elegante 150 with ABS in January as well. The changes will remain the same as the SR with MRF rubber and single-channel ABS on offer. The Vespa range though makes more power from its 150 cc motor belting out 11.4 bhp and 11.5 Nm of peak torque. Expect prices to increase by around ₹ 10,000-12,000 on the Vespa scooters with prices presently starting at ₹ 92,257 (ex-showroom).

As part of the upgrades for model year 2019, the Aprilia and Vespa scooters come with a new semi-digital instrument cluster that features a digital display for the fuel gauge, odometer, and trip metre. The speedometer continues to be an analogue unit. You also get USB charging port under the seat. In addition, there's the new Bluetooth connectivity feature as well that connects your smartphone with the scooter and gives you access to a host of information via the 'Aprilia Connect' mobile app. The app offers features like navigation, mobile connectivity, distress button and vehicle tracking. It is available on iOS and Android devices.