Honda Africa Twin May Be Introduced With A 850 cc Engine

Latest rumours and a rendered image suggest that Honda may be working on a new, smaller version of the Africa Twin adventure tourer. 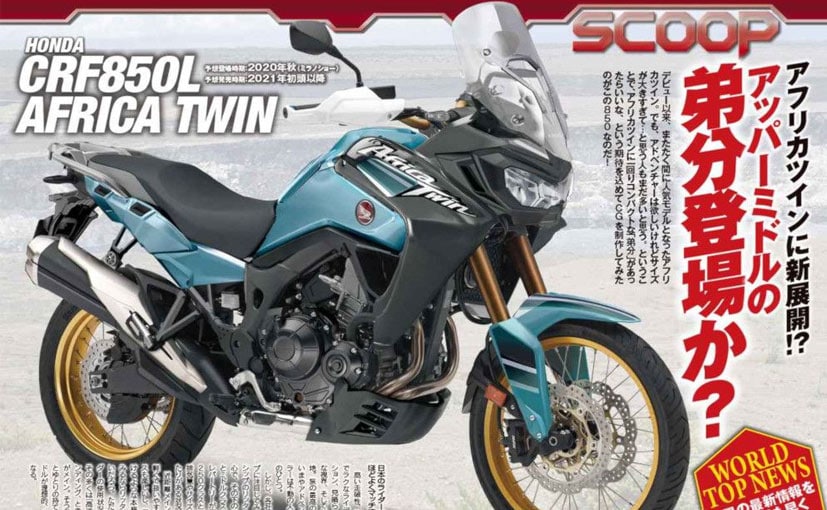 A Japanese publication has published this rendered image of what it says is a smaller version of the Honda Africa Twin. The Honda CRF850L Africa Twin, as it's likely to be called, is expected to be a smaller version of the Honda CRF1000L Africa Twin, which itself is rumoured to be getting a bigger and more powerful engine next year, as well as meet the new Euro 5 emission regulations. While the image of the Africa Twin 850 is a render, and may not be from an actual production model, the premise that Honda is indeed working on a middleweight adventure bike isn't without merit.

The Honda Africa Twin 850 is likely to debut as a 2020 or 2021 model, and will join the Africa Twin family when the current model gets an upgrade, with a bigger 1100 cc engine next year. While the new Africa Twin 1100 will take on the bigger adventure bikes, Honda will be left without a proper middleweight model to take on the likes of the Triumph Tiger 800, BMW F 850 GS, and even the Yamaha Tenere 700 and the KTM 790 Adventure. Right now, the KTM and the Yamaha are still not available on sale in India, but both these bikes have received rave reviews internationally.

The jury is still out though on what engine displacement the smaller, middleweight Africa Twin will have. According to some observers, the new engine may be a 750 cc parallel-twin, which will pay homage to the Honda XRV750T Africa Twin, while others say that the new Africa Twin will indeed come with a smaller 850 cc parallel-twin engine, possibly putting out around 80-85 bhp of power. Compared to the bigger adventure bikes, the middleweight segment (700-900 cc) is more popular internationally, as well as in India, offering better accessibility and pricing. If the rumours are true, expect Honda to show two new Africa Twin models, possibly as early as the EICMA show later this year, with two new engines.

Tesla's 'Battery Day' Drives Reality Check For Recent Share Surge
Subscribe to Our Newsletter
Over 1.5+ Lakhs subscribers
Thank you for Subscribing to Us