Honda's Marc Marquez took a dominant win in the 2019 Spanish GP as Fabio Quartararo retired from second place due to a mechanical issue, after becoming the youngest ever pole-sitter in MotoGP on Saturday. 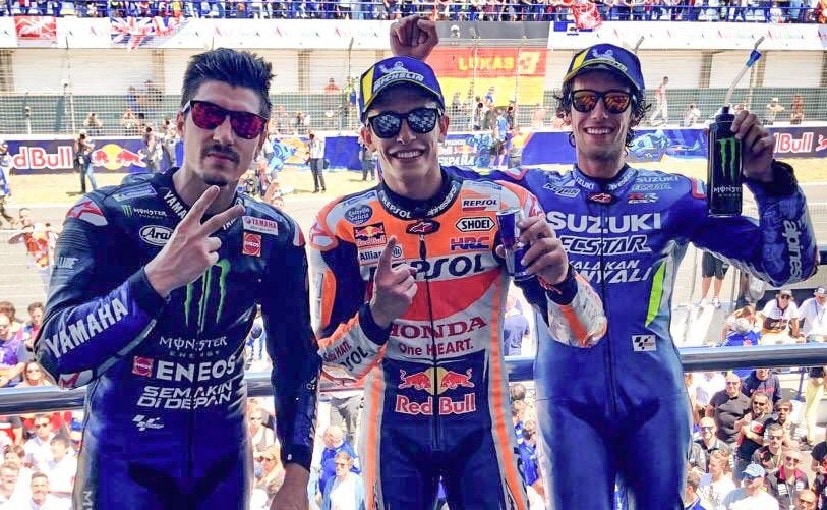 View Photos
Maverick Vinales, Marc Marquez and Alex Rins made it on the podium of the 2019 Spanish GP

After securing a DNF in Argentina last month, reigning world champion Marc Marquez took a dominant win in the 2019 MotoGP Spanish Grand Prix at Jerez. The Honda rider took his second win of the season, beating pole-sitter Fabio Quartararo of Petronas Yamaha who became the youngest rider to take pole position in the history of MotoGP. Interestingly, the position was previously held by Marquez. Coming in second was Suzuki's Alex Rins, fresh off his first-ever premier class win in Argentina while factory Yamaha rider Maverick Vinales took the last place on the podium.

The Spanish GP saw Marquez take a brilliant start catapulting the rider to the front. He passed Quartararo and teammate Franco Morbidelli with the Petronas riders soon being chased by Ducati works rider Andrea Dovizioso. However, Dovizioso ran wide on Turn 1 allowing the top riders some breathing space. Meanwhile, Morbidelli had moved into P2 with Quartararo down to third place. Marquez was clearly at his best and soon broke clear of the rest of the pack. Morbidelli's pace was dropping dramatically over Marquez but the Italian managed to fend off the attack from his teammate. Quartararo continued his top form from qualifying and found the gap on Lap 11 to pass Morbidelli to P2 as the latter ran wide.

The Frenchman was a second behind Marquez but managed to maintain the difference over the next few laps. It seemed Quartararo would be taking his first premier-class podium finish at Jerez but disaster struck. On Lap 14, his Yamaha was stuck in gear forcing him to retire out of contention. Following Quartararo's retirement, Morbidelli was promoted to P2, albeit briefly as Suzuki's Alex Rins passed the rider to move into second place a couple of seconds later. The rider started ninth on the grid but surged passed other riders including Vinales, Dovizioso and more to slot into third behind Morbidelli. As Rins moved behind Marquez, the Honda rider had a lead of over four seconds. The next couple of laps saw Rins reduce the gap, only to take his second podium of the year 1.654s behind after a late charge in the closing lap.

Coming in third was Vinales taking his first podium finish this year despite being chased by Dovizioso for P3. The latter could not find the gap to take a place on the podium and settled for P4, ahead of teammate Danilo Petrucci, his best result yet of the season. Yamaha's Valentino Rossi finished sixth after starting 13th on the grid, and was held back by Pramac Ducati rider Jack Miller in the initial laps of the race. Rossi though was quick to climb the order after the initial resistance from Miller who later crashed out after a collision with Aleix Espargaro. Morbidelli curtailed his drop from the top to P7 finishing ahead of Cal Crutchlow of LCR Honda and teammate Takaaki Nakagami. Honda's wildcard rider Stefan Bradl finished at P10, denying the position to Aleix Espargaro, who recovered to 11th post the crash.

Honda's Jorge Lorenzo could do no better than P12 ahead of KTM riders Pol Espargaro and Johann Zarco. Avintia Racing's Tito Rabat finished 15th taking the final point of the race with Karel Abraham coming in at P16. Aprilia's Bradley Smith finished 17th ahead of the last place finishers Miguel Oliveira and Hafizh Syahrin of Tech3 KTM Apart from the the Petronas Yamaha riders, the crashes at Jerez also included Joan Mir of Suzuki and Pramac Ducati rider Francesco Bagnaia, while Aprilia's Andrea Iannone did not start after injuring himself in qualifying.

With two back-to-back podiums, Alex Rins now sits in second place in the rider standings this season with 69 points, just one point behind Marc Marquez. Andrea Dovizioso is third with 67 points, making for a tight affair. It will be interesting to see if Rins turns out to be the breakout rider in 2019, which will not only be a big push for the rider but the factory team as well.