Steelbird has ventured into a unique form of social media platform where users can earn by uploading and sharing content. 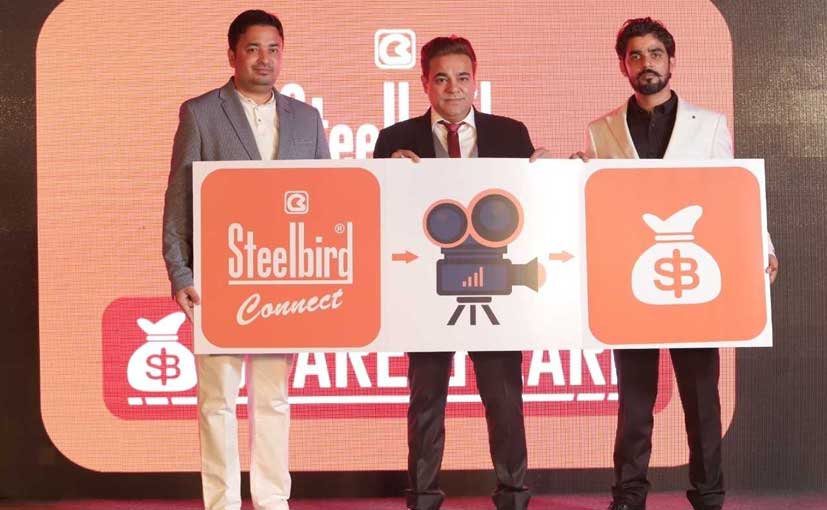 Steelbird India which predominantly is a helmet and auto accessories maker is also known for exploring various businesses, be it the entertainment industry or exporting garments. Marking 55 years of its presence in the Indian market, the company today ventured into the technology space with a rather unique form of social networking and E-Commerce platform- the Steelbird connect. The fanciest bit about the Steelbird Connect is its share & earn feature. People can earn money by uploading and sharing content on this platform. For instance, if you upload a video on this platform with a bid of ₹ 10, the amount will be credited in your wallet every time someone shares your video on any social network including Steelbird connect. In-turn, the person sharing it will also receive the allocated part of the amount.

Now the concept isn't alien to us as we have seen a similar model on some online gaming platform, Loco, for example. However, it's the first time such a model has been implemented on a social network platform. Moreover, Steelbird would also retail over 10,000 products through this app and is taking full guarantee of each and every product it will sell here. Along with helmets and motorcycle accessories, Steelbird will also sell products like garments, fashion wear, utensils and fashion accessories among others. Buyers can also redeem their wallet money for their shopping.

Speaking at the launch, Rajeev Kapur, Managing Director, Steelbird Group said, "Having made a mark in different spheres technology is another vertical that we have been eyeing for a while. To begin with steelbird has come up with a social media platform which is unique easy and mobile operated. This platform will basically provide a quick mode to make content viral. The core idea behind the development is using technology and internet to speed-up the business and rewards the end user which is not at the moment in any of social platform."

Kapur has also cited a strong potential in the market space and is optimistic about the growth given its viability for the modern age users, "Currently India spends INR 108 billion on digital advertising to market their products and this figure is expected to grow at 32 per cent with availability of affordable smartphones and low data tariff, much higher than the 11 per cent overall growth rate of advertisement industry. Steelbird has anticipated that its new tech vertical will capture minimum 1 per cent of market share in next couple of months and business transactions will exceed INR 1000 million per Year. This application will also provide an instant and quick viral roadmap to all brands, vloggers, social media celebrities , Singers & Artists," added Kapur.

Over 2 lakh users have already downloaded the Steelbird Connect app and the company has an ambitious target of crossing 2 million downloads within a couple of months. The application is available both on the IOS and Google Play Store.