Trump Threatens Tax On Harley-Davidson Bikes Imported To The US

President Trumph has warned Harley-Davidson of increased taxes on bike which are manufactured abroad and imported back into the US. 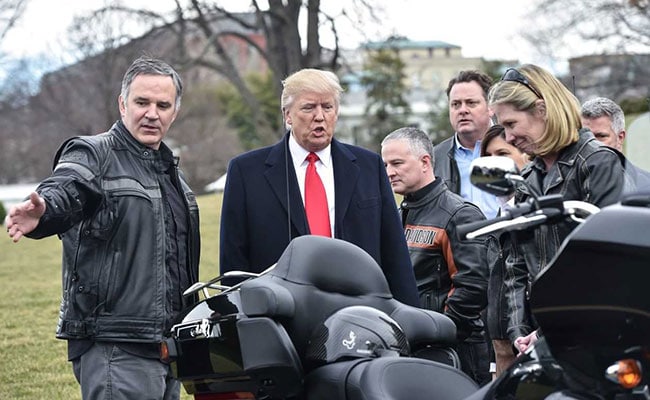 US President Donald Trump has come down heavily on Harley-Davidson after the American motorcycle manufacturer announced that it could move motorcycle production out of the US to offset heavy tariffs imposed by the European Union. Harley-Davidson made the announcement following a 25 per cent tax imposed on its bikes by the EU last week. The EU's hike in tariffs was introduced as a retaliatory move in reply to Trump's price hike on imported aluminium and steel into the US. But now, Trump has attacked Harley-Davidson saying that the motorcycle manufacturer is using the tax row as a cover to move production abroad, warning to 'fix it'.

"Earlier this year, Harley-Davidson said they would move much of their plant operations in Kansas City to Thailand. That was long before tariffs were announced. Hence, they were just using tariffs/trade war as an excuse. Shows how unbalanced and unfair trade is, but we will fix it," Trump tweeted about the issue.

A Harley-Davidson should never be built in another country-never! Their employees and customers are already very angry at them. If they move, watch, it will be the beginning of the end - they surrendered, they quit! The Aura will be gone and they will be taxed like never before!

Trump has also threatened Harley-Davidson with a 'big tax' on bikes which are manufactured abroad and then imported into the US. "A Harley-Davidson should never be built in another country - never! Their employees and customers are already very angry with them. If they move, watch it, it will be the beginning of the end. They surrendered! They quit! The aura will be gone and they will be taxed like never before!" Trump said.

....When I had Harley-Davidson officials over to the White House, I chided them about tariffs in other countries, like India, being too high. Companies are now coming back to America. Harley must know that they won’t be able to sell back into U.S. without paying a big tax!

Harley-Davidson is under increasing pressure after the EU increased tariffs on bikes imported from the US into Europe. Harley-Davidson sells around 40,000 motorcycles in Europe, and the increased taxes, which the company says is from 6 per cent to 31 per cent, is likely to affect sales in a big way. The only way for Harley-Davidson to ensure that overseas sales (which is about one-sixth of Harley's total sales), remains unaffected, would be to shift production to overseas markets.

Harley-Davidson's sales in the US market have slowed down considerably in the last few years, but overseas sales have strengthened. The company now manufactures and assembles several models at its facilities in Brazil, Australia, India and Thailand. The European market is the most important market for Harley-Davidson after the US, and the increased tariffs are certain to affect sales of the iconic American motorcycle brand.