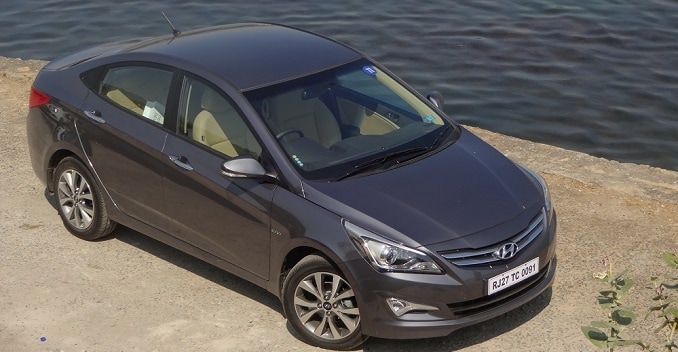 Ever since its introduction in the Indian market, Hyundai Verna has always been among the most important products for the South Korean automaker. While the first two generations lacked the oomph factor that its arch-rival Honda City had, the third generation Verna, launched in 2012, changed everything for the carmaker. Built on Hyundai's Fluidic design philosophy, the third-generation Verna set a new benchmark in all four departments - exterior styling, interior quality, safety and engine performance - especially the 1.6-litre diesel unit. That said, the Verna was always criticised for its performance on the highway due to vague steering and an extremely light suspension setup.

After ruling the segment for good two years, things started changing rather dramatically when Honda rolled out the new-generation City with a diesel powertrain. Within a month, Honda outsold Verna by a huge margin, and continues to lead the mid-sized sedan segment. Things became even worse for Hyundai Verna after the introduction of Maruti Suzuki Ciaz, the replacement of SX4, since Ciaz also quickly outnumbered it to grab the second position in this highly-competitive segment. 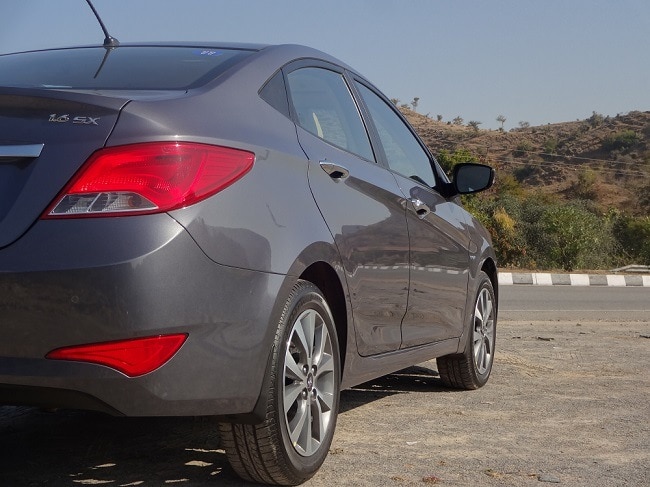 With a hope to reclaim its position, Hyundai is now all set to launch the updated Verna, which has received some cosmetic and mechanical changes. However, one must note that it is not a new-generation model, but only a mid-life facelift.

Does the 2015 Verna have what it takes to become the segment-topper once again? Let's find out.

When I first saw the Verna, its side and rear profile looked largely similar to the outgoing model. However an all-new front fascia gives it a refreshing look. The updated Verna gets larger projector head-lamps, redesigned bumper, new boomerang shaped fog-lamps, dual-slat chrome grille and a bigger airdam. 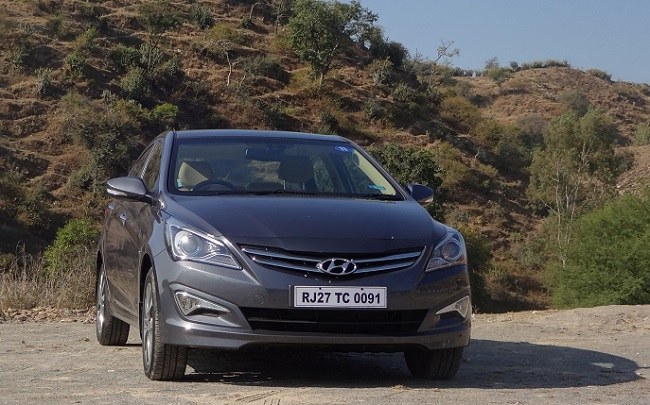 As I mentioned above, the rear profile hasn't received any major changes save for the new LEDs on tail lamps and new reflectors on the bumper. As far as the side profile goes, the diamond-cut alloy wheels add more appeal to the car.

Get inside the car, and you will see the same old dashboard, infotainment system, steering wheel, and controls. The music system, however, now has 1 GB internal memory, which allows you to store your favourite music tracks without worrying about carrying a USB around with you. The ambience is light inside the car; the top-end variants get perforated, light cream coloured leather seats. 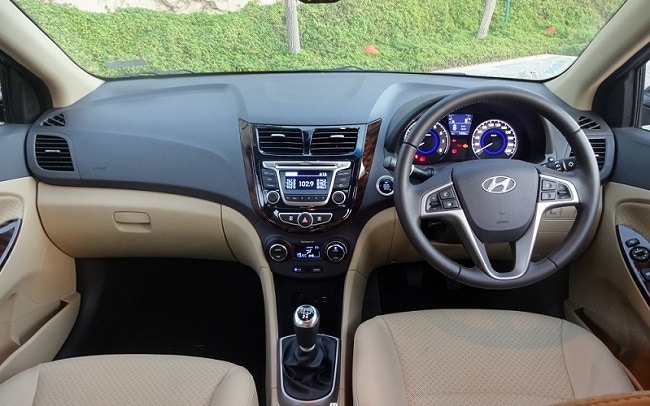 The door trims, too, sport leather. The entry- and mid-level variants also get similar seat covers albeit with fabric. Thanks to the high-quality plastic, the surface feels good to touch too. Though old, the dashboard still has a far more practical layout than many of its rivals. The speedo- and RPM-meters are easy to read, and the onboard computer shows you data like average fuel economy, distance to empty, external temperature, eco mode status etc.

The front seats offer decent lower-back and under-thigh support, and the driver's seat has all the adjustments including that for height. While the front seats of the car are fairly comfortable for long drives, the rear seats can get a bit tiring. Even though the company claims to have improved under-thigh support in the rear bench, I am of the opinion that it could still do with some improvement. 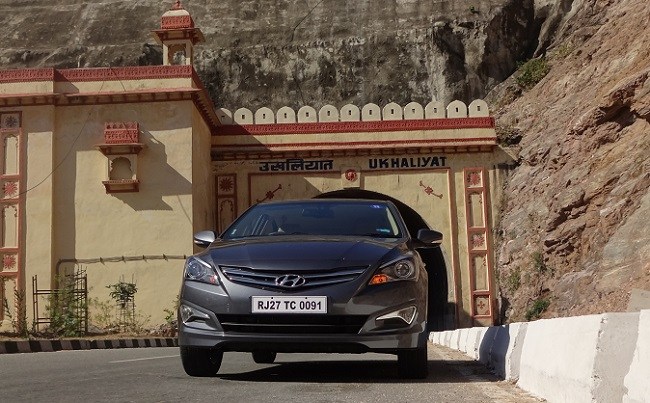 Moving on; since it was a mid-life facelift, I didn't expect major updates under the hood, but I was thoroughly impressed when I drove the car. After driving the car for about 100Kms, I can say that the engineers at Hyundai have worked really well, for it feels a lot better to drive as compared to the exiting model. While the old model offered excellent ride quality on city roads, its performance during high-speeds was rather questionable. I believe its softly-tuned suspension and light steering was ill-suited for such speeds. So, for me, it was always a city car; suited for uneventful roads and speeds up to 130-140Km/h. However, the updated model feels a different car altogether, thanks to the stiffened suspension and heavier steering. The car's ability to absorb undulations is far better than that of the old model. The recommended route for the drive allowed us to test its capability on city-roads, highways and broken surfaces. Just so you know, we were three folks in the car, and all of us agreed that its ability to handle almost every type of terrain was impressive. On uneven roads, where its closest rival Honda City still fumbles, the updated Verna shines.

Also with the slightly heavier steering, the car gives you the confidence to keep pushing it, quite unlike the old model. That said, the steering feedback and the car's stability on high-speeds are still debatable. Even when you are driving the car on flat surfaces in straight lines, you need to steer a little to keep it straight. 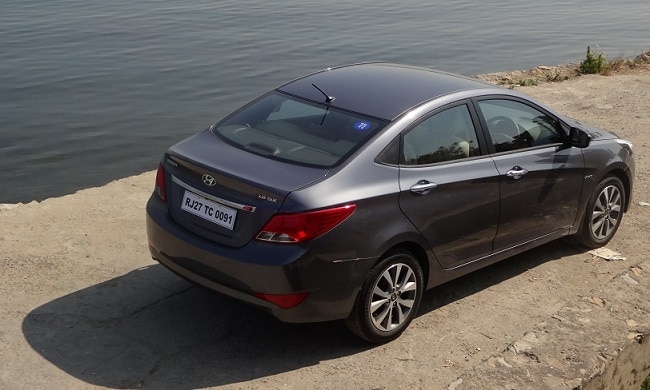 Upon its launch, the 2015 Verna will be made available in two petrol (1.4-litre & 1.6-litre) and two diesel (1.4-litre & 1.6-litre) options, and I will have you know that the 1.6-litre diesel unit is the most impressive of the lot. Despite being a diesel engine, it doesn't give you the clatter of a typical oil burner, and there is barely any noise in the cabin at almost all speeds - which, by the way, doesn't hold true for the Honda City. The engine has notable turbo lag up to 1,800rpm, but it comes alive once you cross the 2,000rpm mark. The car pulls really well after that, thanks to the 260Nm of peak torque, which is available from as low as 1,900rpm. Just like the old model, the mid-range of this engine is quite punchy and overtaking is fun. Compared to the Honda City diesel, which runs out of breath after 140Km/h, the Verna 1.6 diesel feels so alive.

Unlike typical facelifts, Hyundai has addressed almost all the major issues that the old model faced. With a stiffened suspension, heavier steering and updated design along with most powerful petrol and diesel engines in the segment, the Verna is a much better value for money product than many of its rivals.