Like every year, Jeep has finally taken the wraps off seven one-off custom SUVs for its annual Easter Safari which will be held in Moab, Utah in USA. 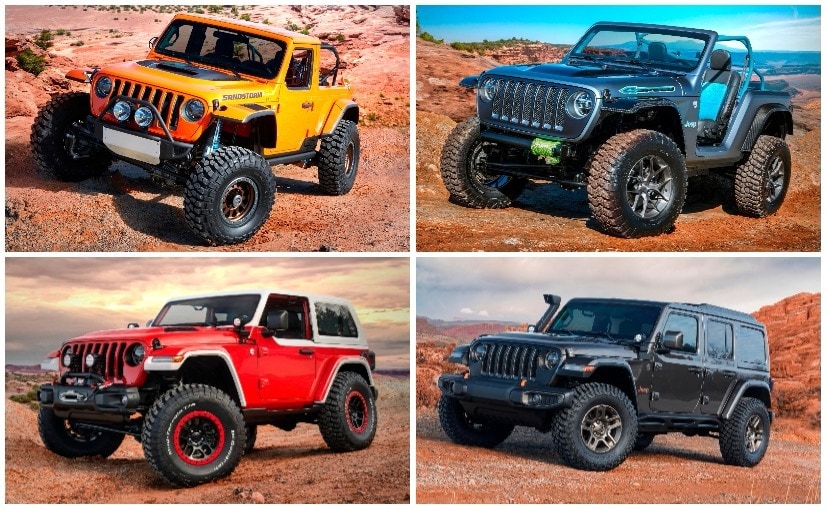 It is that time of the year when Jeep shows off its creativity and technical ability, showing off jaw dropping custom SUVs for its annual Easter Safari event held in Moab, Utah in USA. We already gave you a sneak peek of two of the customs and now Jeep has finally revealed seven new custom SUVs which will enthral Jeep enthusiasts at this year's event. These SUVs have been built in collaboration between Jeep and Mopar (Mobility and Parts). The 2018 Easter Safari will be held from 24 March, 2018 to 1 April, 2018.

This year, the seven custom SUVs have been built using production and prototype performance parts, built by Mopar. Most of these are based on the 2018 new-generations Wrangler which was unveiled recently. You would be surprised to know that Mopar already has more than 200 after-market parts and fitments for the new-gen Wrangler. 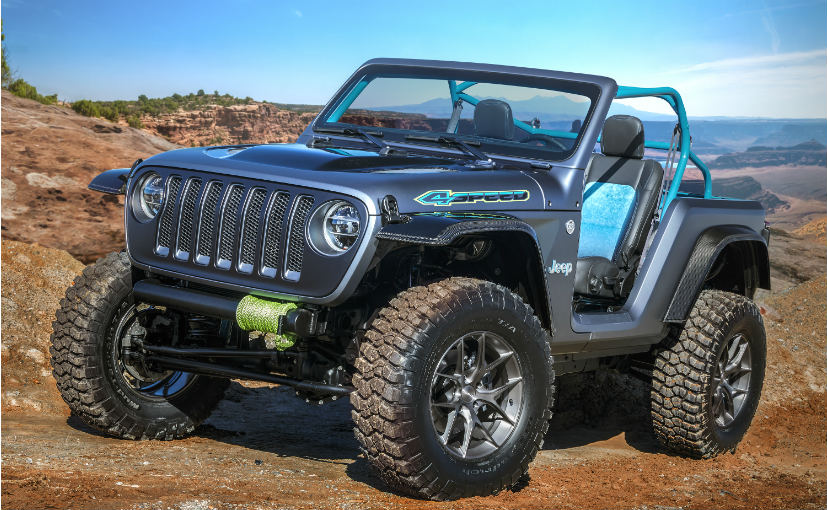 The use of carbon fibre is not uncommon in sportscars. But SUVs? Well, Jeep commissioned a concept called the 4Speed, which takes its inspiration from the 2011 Pork Chop Concept and the 2013 Stitch Concept and makes substantial use of carbon fibre. The 4Speed Concept's hood, fenders and the rear tub are made of carbon fibre and perforated Aluminium panels, which makes the bodywork rather light. Under the hood, it gets the all-new 2.0-litre turbo-charged I-4 engine with an 8-speed automatic gearbox. The ride height of the 4Speed concept is just two inches more than that of a stock Wrangler. The 4Speed rides on 18-inch lightweight monoblock wheels and 25-inch BF Goodrich mud tyres. 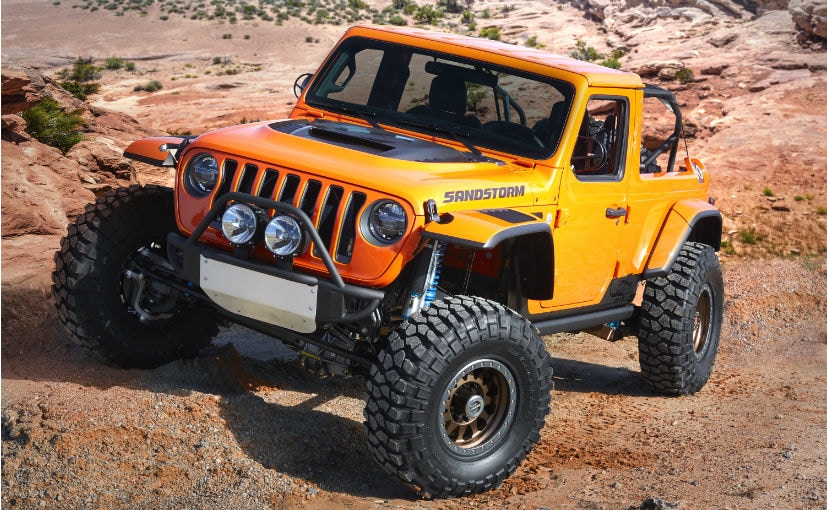 This one is also based on the new-gen Wrangler and has been inspired by Baja racers. The idea is to take on sandy terrain and do well as a daily drive too. The styling is pretty cool, with a carbon fibre vented hood, high set fenders at the front and rear and a spare tyre mounted at the rear. The rear roof section and the rear doors have been chopped off. Inside, the Sandstorm gets leather seats up front and bucket seats at the rear, a racing instrumentation cluster, 7-inch off-road GPS unit and other controls. The Sandstorm gets a 6.4-litre V8 engine, with a 6-speed manual transmission. It rides on 17-inch beadlock wheels and 39.5-inch Goodrich Krawler tyres. 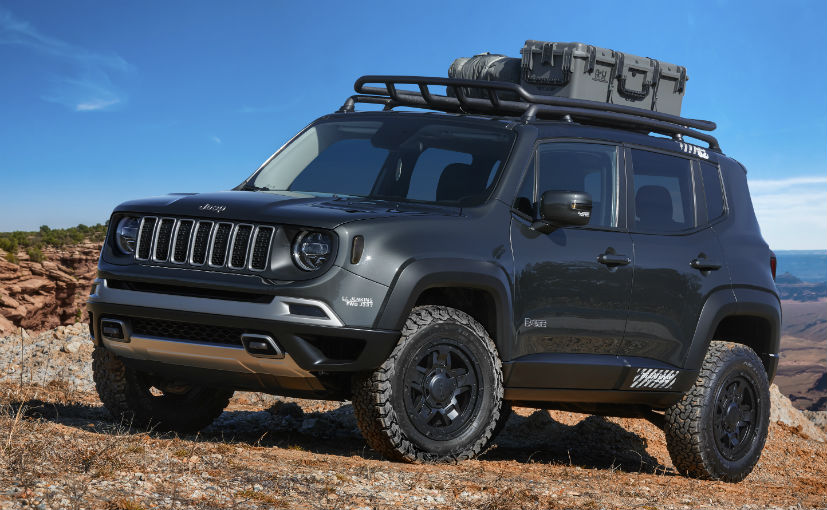 The third concept that Jeep has revealed is the B-Ute, which is a tough little Renegade with lots of modifications to make it an off-road star. The front and rear ends have been beefed up and the wheel arches now get a little wider, to give the SUV a wider stance. To make it more off-road worthy, a 1.5-inch high lift kit has been used along with rock rails and a roof rack. The engine is absolutely stock, which is a 2.4-litre TIgershark engine with a nine-speed auto gearbox. The SUV rides on 17-inch wheels with a 30-millimetre offset, wrapped in BF Goodrich T/A Baja Champion tires. 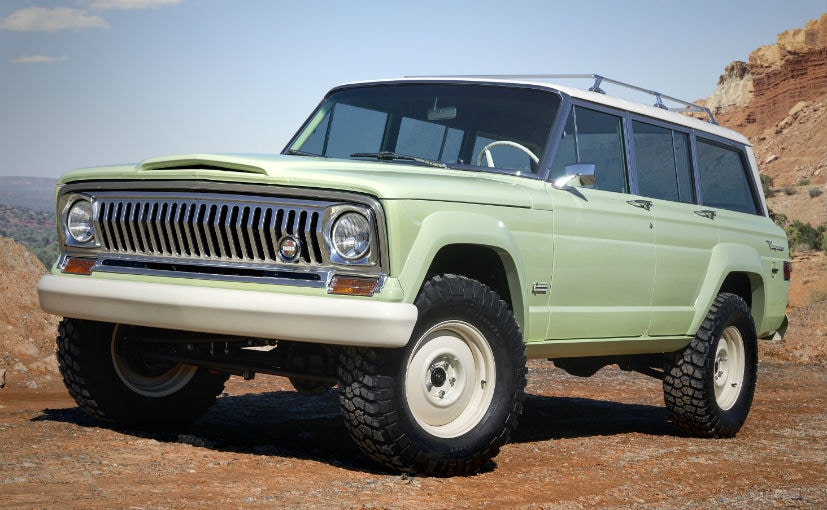 A one-off retro model, this here is the Jeep Wagoneer Roadtrip. Based on the 1965 Wagoneer, the model uses the original steel body but of course, gets a lot of updates. The Wagoneer was manufactured from 1965 till 1991 and was the first SUV get have a 4WD mated to an automatic transmission. Under the hood is a 5.7-litre V8 motor that is mated to a 4-speed transmission. Apart from the engine, the chassis has been reinforced and the Wagoneer Roadtrip rides on oversized Goodrich Tyres. The wheelbase has been increased by 127 mm and the track is also wider now. The interior has the original bench seats at the front and rear along with a few retro-modern trimmings. 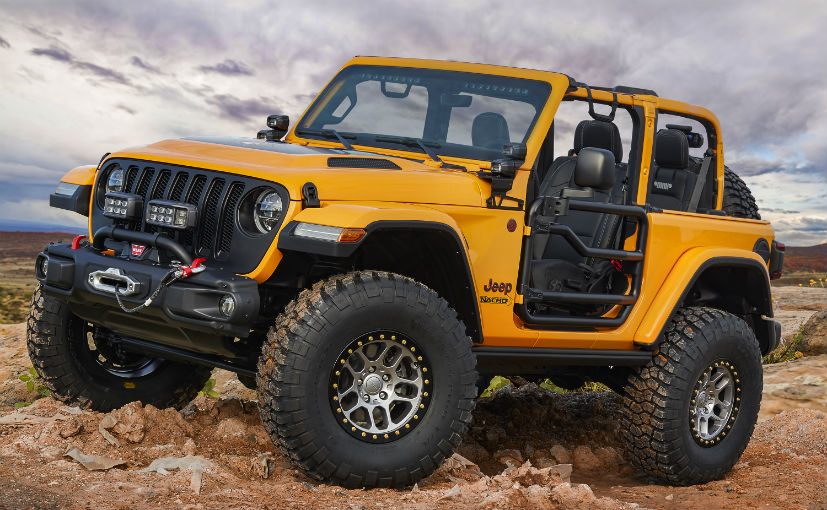 Based on the 2018 Wrangler Rubicon, the standout feature on this SUV is the Nacho yellow colour with blacked out bits such as the hood, bumpers and the rather muscular steel tube doors. The Nacho gets a 2.0-litre turbocharged I-4 engine, which is the same as the one on the Jeep 4Speed. There is a 2-inch high lift kit used along with the oversized Goodrich tyres. The seats are done in black leather and have the Jeep grille logo embroidered along with accent stitching. 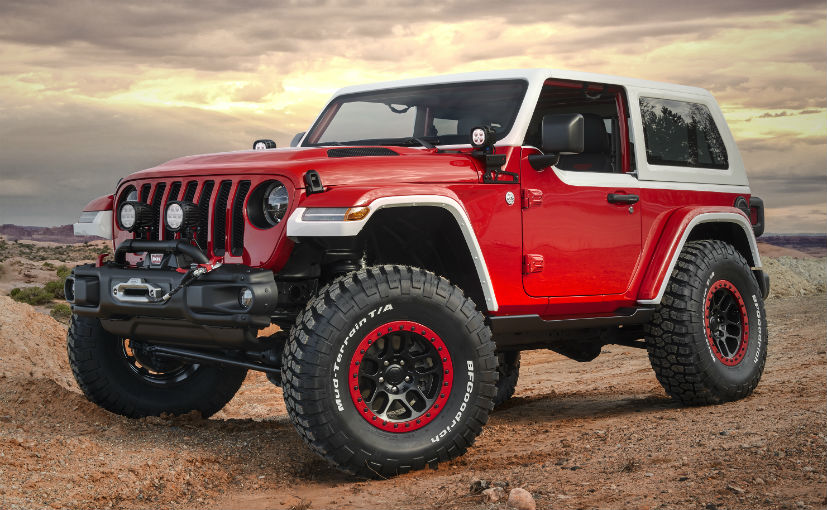 Yet another retro-flavoured model, the Jeepster harks back to the styling of the original 1966 Jeepster model. The lovely two-tone old school colour scheme of red body and a white hardtop looks beautiful. The windscreen too can be folded down, just like in the old Jeepster. Also, the Jeep badging gives way to tri-coloured Jeepster badges. Like other concepts, the Jeepster too gets a 2-inch lift kit and 37-inch BF Goodrich oversized tyre wrapped around 17-inch beadlock wheels. The interior gets black leather seats with red Jeep grille logo embroidered on them and red accent stitching. 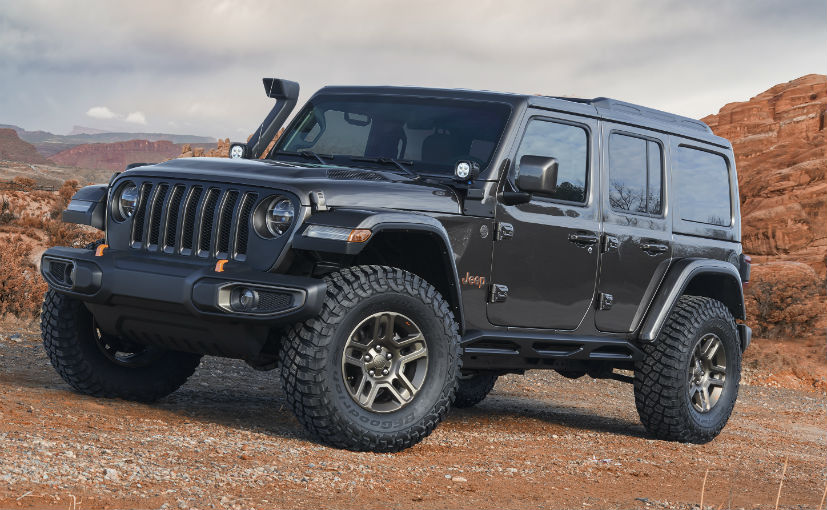 The last concept that Jeep revealed is the J-Wagon Concept, which is a part urban-dweller and part trail machine. It is based on the new Wrangler Sahara. It gets a new hood with a cut out kit and brass latches with Willys logo on it and also gets a snorkel to improve water wading abilities. The grille up front is a Mopar part and has body-coloured bezel trim. The SUV rides on 17-inch wheels wrapped in 35-inch Goodrich tyres.

Jeep Compass
₹ 15.6 - 27.6 Lakh *
Subscribe to Our Newsletter
Over 1.5+ Lakhs subscribers
Thank you for Subscribing to Us
x