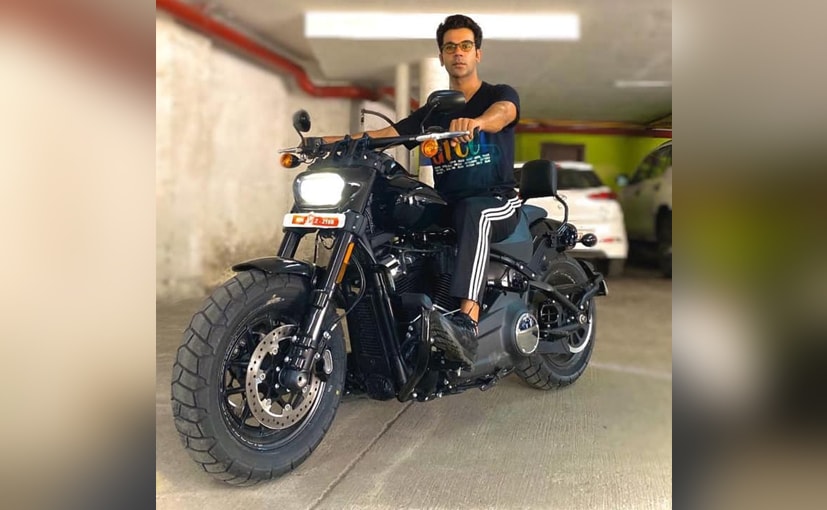 Actor Rajkummar Rao knows how to win you over with his effortless performances, and the string of hit movies to his name certainly stand testimony to that. While the actor has been often seen riding motorcycle on celluloid, more often than not with two more characters on the astride (which is illegal), you could soon spot around Mumbai riding his newest Harley. The 'Trapped' actor recently brought home the Harley-Davidson Fat Bob, which is priced from ₹ 14.69 lakh (ex-showroom). The new Fat Bob was introduced in India in 2017 and is now part of the Softail family, as opposed to the Dyna family that the previous generation version was. Rao's brought the 2019 Harley-Davidson Bob to his garage.

Compared to the previous generation version, the new Harley-Davidson Fat Bob gets a bulk of changes including a more aggressive and muscular appearance along with a new engine and underpinnings. The power cruiser gets a 34 stiffer and 15 kg lighter frame, which houses the Milwaukee-Eight 107 V-Twin engine that comes with oil-cooled exhaust valves and belts out 145 Nm of peak torque. The signature change though remains the new oblong-shaped LED headlamp that stands out amidst retro-themed round headlamp designs on other cruisers in this segment.

The new headlamp is complemented by the beefy forks up front and unique 2-1-2 upswept exhaust system that gets a custom magnesium finish. You do get familiar bits on the Harley-Davidson Fat Bob including the teardrop fuel tank, contoured seat, and the wide handlebar. The rear suspension is handled by a single shock under the seat, while braking performance comes from disc brakes at either end with dual-channel ABS. The new Fat Bob also comes with 150 mm front and 180 mm rear section tyres, which the American bike maker says are the fattest-aggressively treaded tyres that the company has on offer.

Triumph Speedmaster
₹ 11.12 Lakh *
View More
Subscribe to Our Newsletter
Over 1.5+ Lakhs subscribers
Thank you for Subscribing to Us