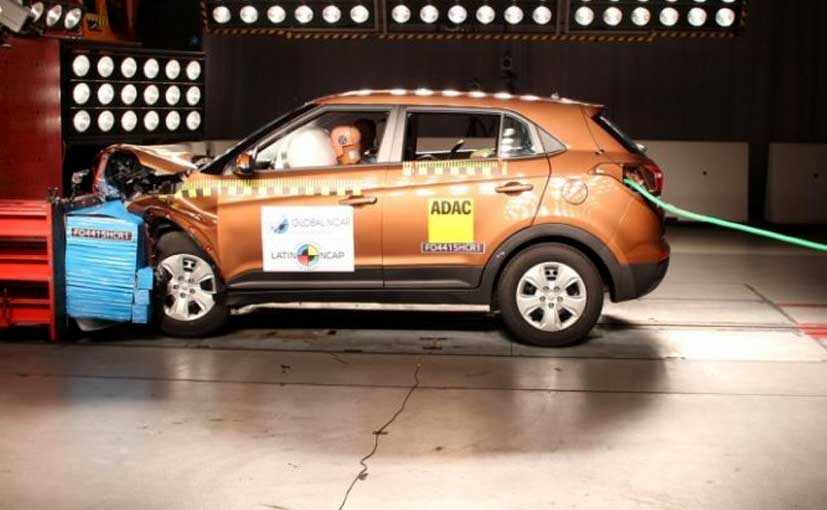 The 'Made-in-India' Hyundai Creta SUV has scored a commendable four stars out of five in the latest New Car Assessment Programme (NCAP) crash test for Latin America and the Caribbean. The Hyundai Creta which was put through the test was a left-hand drive model produced in Hyundai's manufacturing facility in Chennai and was meant for countries like Colombia, Costa Rica, Peru, and Panama.

The SUV achieved four stars in adult occupant protection and three stars in child occupant protection. According to Latin NCAP, the lack of standard equipment on the car such as Anti-lock Braking System (ABS) and passenger Seat Belt Reminder (SBR) limited the model from achieving a better rating. The side impact test that the manufacturer did not sponsor was not performed.

The tested Creta was equipped with safety features like driver and passenger front airbags, front seatbelt pretensioners, ABS, and ISOFIX child safety system. The test results indicated that the driver and passenger were both well-protected by the driver and passenger airbags in case of a frontal impact. The bodyshell was rated as stable and capable of withstanding further loading. Also, the child seat for a 3-year-old was able to prevent excessive forward movement on impact. However, the belted Child Restraint Systems (child seats) did not score too well in the test.

Hyundai Creta, launched in India in July, has received an overwhelming response in India as well as across the globe. While the SUV garnered over 70,000 bookings and around 3,40,000 enquiries in India, it has also recorded over 15,770 orders in international markets such as Colombia, Costa Rica, Peru, Panama, Oman, UAE, Saudi, Egypt, Morocco, and Nigeria. Hyundai says that it will start exporting the car to new markets soon.