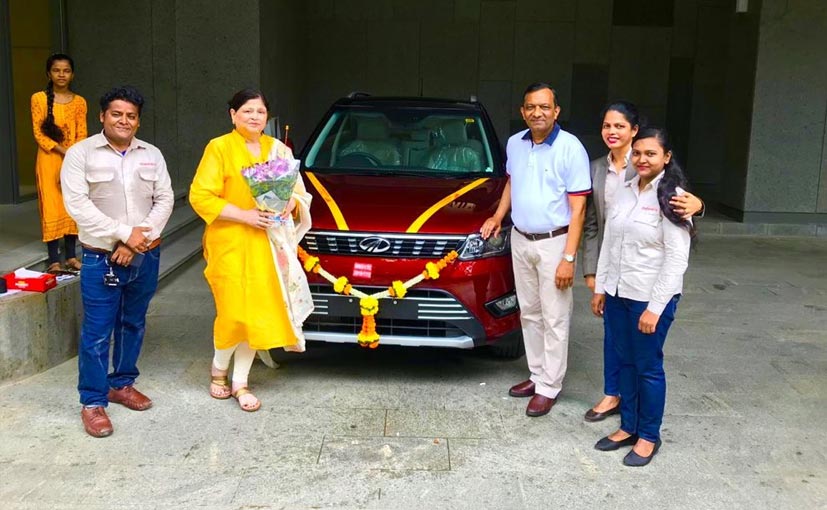 Mahindra & Mahindra Managing Director Pawan Goenka is a proud owner of the XUV300 subcompact SUV. While Mr. Goenka heads one of the largest auto companies in India, and has had access to a number of products over the years, both in pre- and post-production form, the top boss finally decided to bring home the Mahindra XUV300, his first "self-owned" car in 26 years. The Mahindra boss took delivery of the new XUV300 in the dual-tone Red Rage shade on the occasion of Ganesh Chaturthi, and shared images of his new prized possesion on Twitter.

Goenka tweeted, "On this auspicious day of Ganesh Chaturthi, our first "self owned" car in 26 yrs was delivered. and it is the @MahindraXUV300. I have driven XUV300 many times as MD of M&M but driving today as a customer and owner was a different excitement."

On this auspicious day of Ganesh Chaturthi, our first “self owned” car in 26 yrs was delivered. and it is the @MahindraXUV300 . I have driven XUV300 many times as MD of M&M but driving today as a customer and owner was a different excitement. pic.twitter.com/ozAR9QOUtb

Pawan Goenka has got the top-of-the-line Mahindra XUV300 diesel AMT version. In a series of follow up tweets, he confirmed that the SUV gets an electric sunroof, leatherette seats, 17-inch diamond cut alloy wheels, as part of the package. The Mahindra XUV300 AMT is available in two trims W8 and W8 (O) priced at ₹ 11.50 lakh and ₹ 12.70 lakh (ex-showroom, Delhi) respectively.

Anand Mahindra too congratulated Dr. Goenka on his new purchase. The M&M Chairman has had a number of the company cars in his garage as well including the XUV500 and event the TUV300. His latest purchase is the flagship Alturas G4 SUV that was delivered to him January this year. In case you were wondering, Pawan Goenka is not eligible for a employees discount.

You have excellent taste, Pawan...A very good choice. (Although I suspect there wasn't much competition! 😊) https://t.co/Bg2dvDixE1

The Mahindra XUV300 AMT is powered by the new 1.5-litre turbo diesel engine that develops 115 bhp and 300 Nm of peak torque. The new autoSHIFT AMT unit is sourced from Magneti Marelli and has been tuned for peppy acceleration and easy overtakes. It also comes with a manual mode, while there's a vehicle creep function that aids in stop-and-go traffic that can be disabled as well. The SUV also comes with Hill Start Assist, seven airbags [on W8 (O)], ABS with EBD, ESP with rollover mitigation, corner braking control, heated ORVMs, ISOFIX, front seatbelts with pretensioners, seatbelt reminder for front and rear seats, TPMS and more.