First unveiled in Berlin on September 1, 2016, the new Kodiaq SUV is a completely new product from the Skoda stable with underpinnings from the Volkswagen Tiguan. We give you a glimpse of all the features that the new SUV from Skoda has to offer. 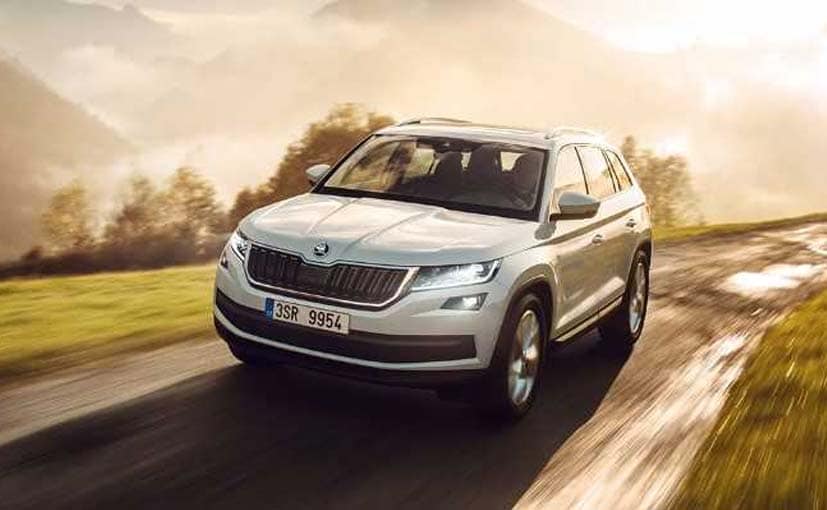 Skoda today announced that the all new Kodiaq SUV in India will launch in India only in Q4, 2017. The Kodiaq SUV is the first 7-seater SUV from Skoda and in India it will rival the Ford Endeavour, Toyota Fortuner and also its sibling Volkswagen Tiguan. First unveiled in Berlin on September 1, 2016, the new Kodiaq SUV is a completely new product from the Skoda stable with underpinnings from the Volkswagen Tiguan. While you can read everything about the new Skoda Kodiaq here, we give you a glimpse of all the features that the new SUV from Skoda has to offer. The new Skoda Kodiaq SUV is built on Volkswagen Group's modular transverse matrix (MQB), the same platform on which the recently launched VW Tiguan SUV is based on. The Kodiaq SUV employs the company's latest crystalline design language with sharp lines, creased metal and layered bejeweled lighting elements. The wide, three-dimensional radiator grille is striking and the narrow, raked headlights flow seamlessly into the radiator grille, giving the Skoda Kodiaq SUV a distinctive appearance. With the signature butterfly grille, the new Kodiaq SUV is flanked by sharp headlamps and LED daytime running lights. The bumper design is bold and aggressive, while the squared wheel arches and the larger roof rails gives the Kodiaq a muscular SUV appeal. Slide inside the new Skoda Kodiaq and you will find a large cabin for the SUV segment. 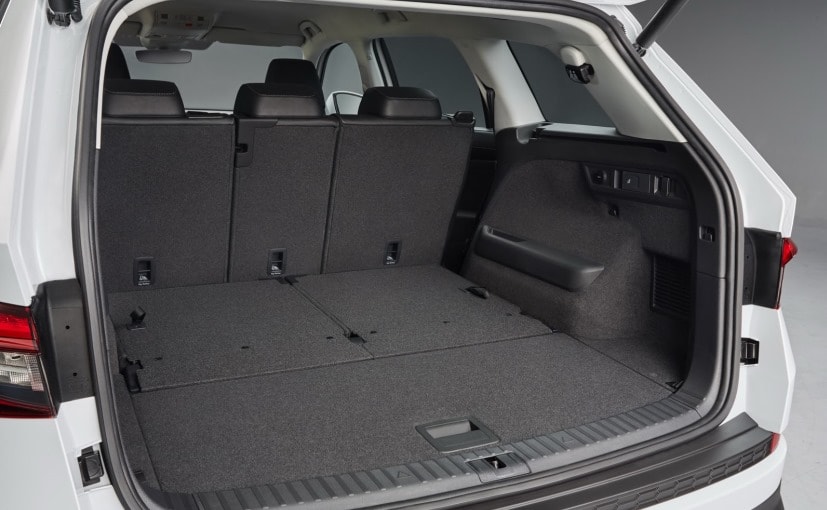 The crisp exterior design also finds its way inside the cabin and continues to feature on the instrument panel. The interior is characterized by bold vertical elements, such as the four large air vents and the large display splits the instrument panel into two equal sections for the driver and passenger. The large display has an elegant glass design with 'Simply Clever' operation with all switches and functions easily accessible with a self-explanatory layout. The steering wheel is available in a choice of different versions- one of which is heated. The optional tri-zone climate control has its own control panel for the rear seats as well giving the rear passengers complete control of the cabin temperature. 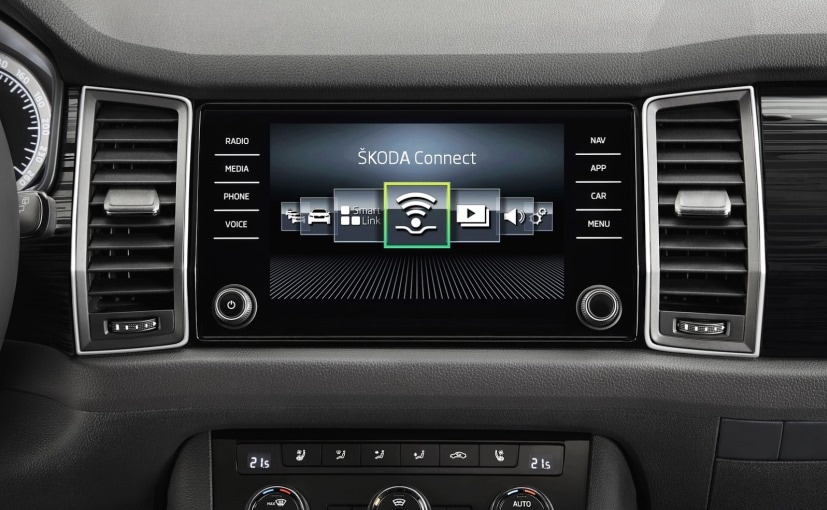 The Swing infotainment system with its 6.5-inch screen comes as standard

Moving over to the features list, the new Skoda Kodiaq SUV is loaded with features. The Swing infotainment system with its 6.5-inch screen comes as standard. It can be supplemented with a smartphone Bluetooth connection and Skoda SmartLink. SmartLink supports the use of the Apple CarPlay, Android Auto and MirrorLink standards in the car. The hands-free microphone records the driver's voice, and transfers it to the back seats via the rear speakers. The Canton Sound System features ten speakers, including a subwoofer, and has a power output of 575 watts. As an option, the Kodiaq SUV can be equipped with tablet holders that can be attached to the front headrests. The devices can be charged using optional 230 V and USB sockets. All this can accessible through the Skoda Connect App that provides infotainment and connectivity solutions. 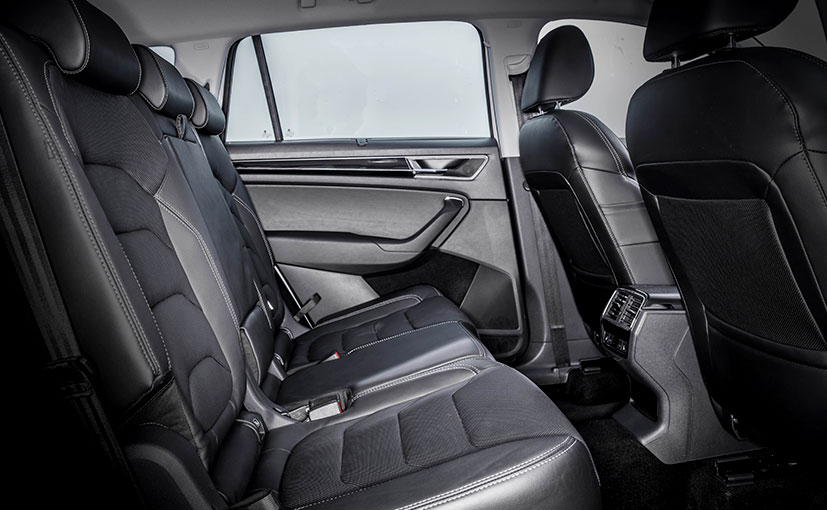 On the safety front, the Kodiaq SUV gets Door-Edge Protection; Electric Child Safety Lock for the rear do

On the safety front, the Kodiaq SUV gets Door-Edge Protection; Electric Child Safety Lock for the rear doors, In-Car Communication, as well as sleep headrests is available as optional. The Kodiaq SUV also gets the Driver assistance systems, Tow Assist and Area View system, which includes a virtual, top-down view and 180-degree images of the areas to the front and rear making it easier to drive in confusing situations or on rough terrains. Apart from these, the new Kodiaq SUV also comes with Adaptive Cruise Control, Lane Assist, Blind Spot Detect and Rear Traffic Alert. However, we think most of these features might go missing in the India-spec variant considering that they're radar based. Under the hood, the new Skoda Kodiaq SUV will get three engine options- a 2-litre, 4-cylinder turbocharged petrol engine that produces 177 bhp of peak power and 320 Nm of peak torque, a 2-litre 4-cylinder turbocharged diesel engine that churns out maximum power of 147 bhp and maximum torque of 340 Nm or 187 bhp and 400 Nm of peak power. Transmission duties are handled by a 6-Speed Manual Gearbox and a 7-Speed DSG unit. Moreover, the new Kodiaq SUV will get three driving modes- Normal, Sport and Comfort. Although, Skoda says the Kodiaq is not an all-out off-roader, the beast has the ability to take on rough terrains when needed. 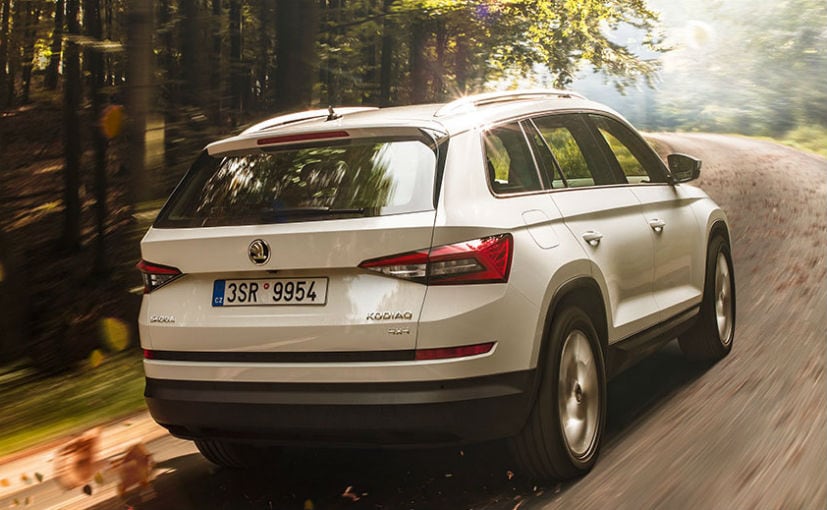 The Skoda Kodiaq is one of the most anticipated launches in India, but with its debut set to take place by end of the year; the Czech-car makers will definitely miss out on the festive season benefits. However, if they get the pricing right, Skoda surely will have a winner in their hands.