Volkswagen Amarok that pulled the 49-tonne tram was powered by a turbocharged V6 3.0-liter TDI engine that belts out a massive 255 bhp and 580 Nm of peak torque. 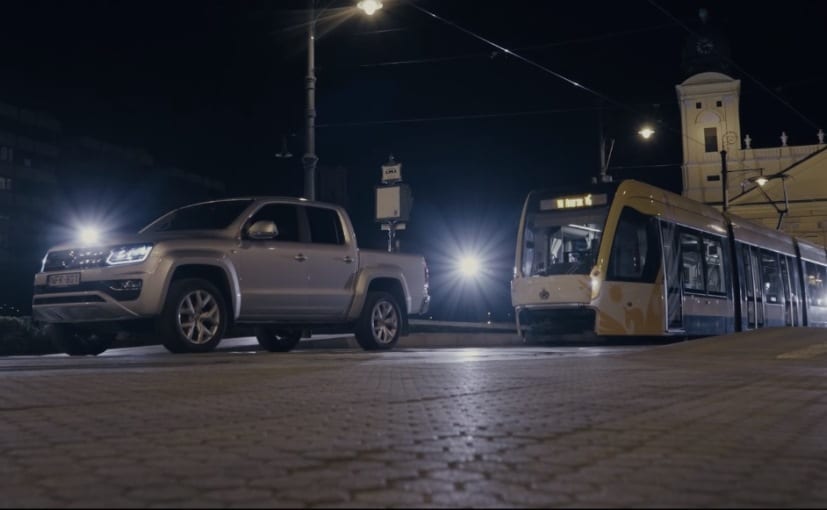 It was just in April this year that Volkswagen added a more powerful V6 engine to its heavy-duty pickup truck, VW Amarok. Now, with an aim to prove the Volkswagen Amarok's engine prowess and towing capability, the carmaker's Hungarian arm has released a new promo video where the pickup truck is shown pulling a 49-tonne tram. While the Indian market might not be all that familiar with Volkswagen's pickup trucks, in the global markets, the Amarok is certainly considered to be one of the most capable small pickups in the world, and this particular feat has just added another feather to its cap.

Powering the Volkswagen Amarok is a turbocharged V6 3.0-liter TDI that belts out a massive 255 bhp and develops a meaty 580 Nm of peak torque, available between 1,400-3,250 rpm. Furthermore, the Amarok also gets the assistance of Volkswagen's 4Motion all-wheel-drive system channelled through an eight-speed automatic transmission that comes as standard. With so much power on tap, it's not a surprise that the Volkswagen Amarok could pull off such a trick.

The flagship V6 diesel engine is currently offered with the top-end Highline and Aventura variants of the Volkswagen Amarok. In addition to the powerful engine, the SUV pickup also comes with a host of premium features and equipment like bi-xenon headlights with LED daytime running lights, automatic headlights and wipers, cornering fog lights, and electric folding mirrors and more. The Amarok also comes with black exterior accents, beefy high-gloss 20-inch wheels, silver skid plate, and vertically stacked LED taillamps. The cabin comes with Nappa leather interior, larger touchscreen infotainment system and an initiative instrument cluster with MID among others.