We spend some time with the new Ducati Scrambler 1100 to see if it's worth the price it commands. 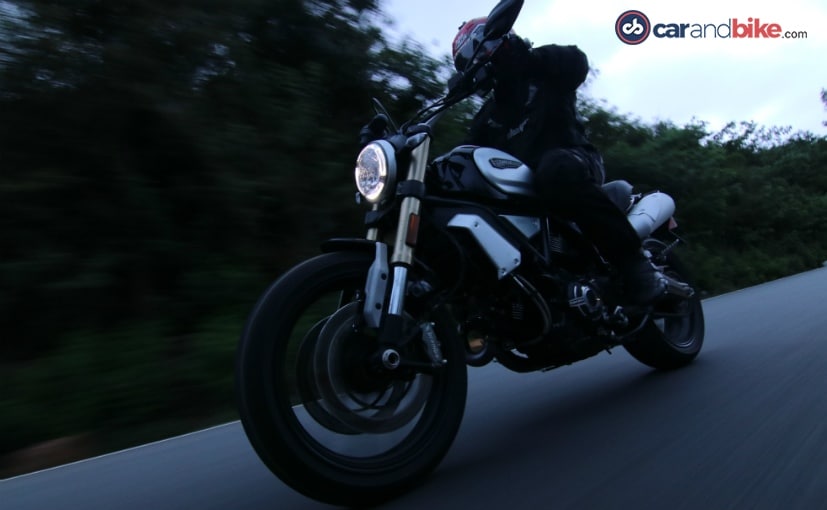 View Photos
The Ducati Scrambler 1100 is bigger, brawnier and with more technology

It's bigger, taller, and more powerful than ever. And the new Ducati Scrambler 1100 promises a whole lot of technology never before seen on any model in the Scrambler family. But it's more than just a regular Ducati Scrambler with a bigger engine, and a more expensive sticker price. The Scrambler 1100 offers a completely new level of technology and performance, which Ducati feels, will appeal to not just any rider, but even to existing Scrambler owners. It's available in three variants - the base Scrambler 1100, the Special, and a top-spec Sport variant, each ascending in its value, and each variant offering something unique to the discerning Scrambler fan.

The Scrambler is not just a motorcycle model for Ducati, but it's in essence a separate brand altogether. Ever since the new Scrambler was introduced in 2015, Ducati has sold close to 50,000 Scramblers worldwide. The Scrambler story in India is also similar. Of Ducati India's overall sales till date, nearly 25 per cent of those numbers are attributed to the Scrambler family. And part of that attraction towards the Scrambler, at least in India, isn't just because of the personality and character of the bike, but also because it's one of the most affordable Ducatis available in the market. So, will a bigger (and more expensive) Scrambler have the same level of success? We spend some time with the new Ducati Scrambler 1100, looking for answers. 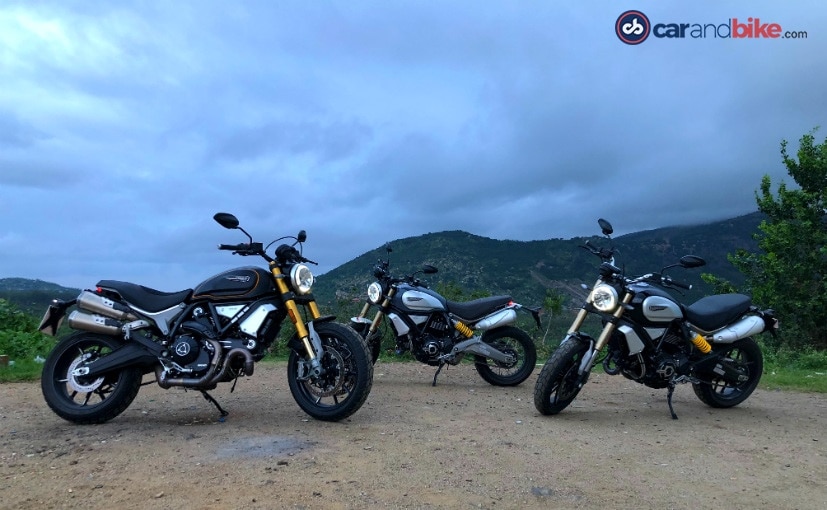 (The Scrambler 1100 range is available in three variants - the base Scrambler 1100, the Special, and a top-spec Sport variant, each ascending in its value)

Compared to the smaller Ducati Scrambler 800, the new Scrambler 1100 certainly looks like the big brother, quite literally. It's beefier, brawnier, and definitely has more presence. Overall, the Scrambler 1100 is bigger; it's got a taller seat height, a bigger fuel tank, beefier 45 mm front forks, and thicker tyres. The bike is 50 mm wider, 69 mm longer, the seat is 20 mm taller and 43 mm longer, and the front wheel is now 18-inches, instead of the 17-inch wheel on the regular Scrambler. The headlight design is new, and there are quite a bit of anodized aluminium bits. The handlebar ends get the aluminium treatment, as does the front mudguard stays, the headlight bezel, the swingarm, dual upswept exhausts, and even the engine, crankcase and alternator covers get some aluminium finishes. The full-LCD instrument console is all-new too, and has more information on display, with a trendy screen on screen design. 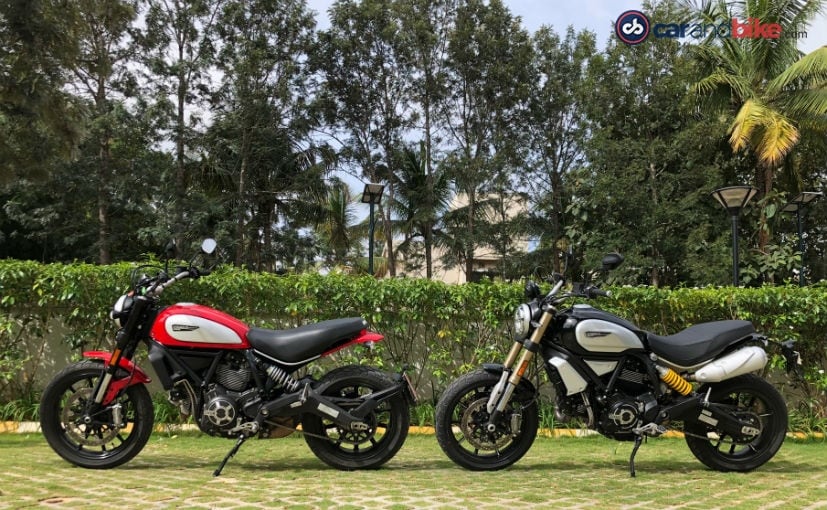 (The silhouette though is unmistakably Scrambler, with the base variant offering the typical tall and wide handlebar)

Overall fit and finish of the Ducati Scrambler 1100 is quite nice, although a few welds on the frame could have been better finished. The silhouette though is unmistakably Scrambler, with the base variant offering the typical tall and wide handlebar. The Scrambler 1100 Special gets wire spoke wheels, and some additional aluminium bits, on the front and rear mudguards, and a brown quilted seat. The Scrambler Special also has slightly different ergonomics, with a lower handlebar, which is also shared with the Sport. But the Sport replaces the Marzocchi forks and Kayaba suspension for top-spec Ohlins suspension, with an even fatter 48 mm front fork. And there are the contrasting racing stripes along the bike's bodywork in bright yellow on the Viper Black shade to give it that 'sporty' appeal. (The headlight design is new, and there are quite a bit of anodized aluminium bits)

Apart from these minor changes the performance and technology package is the same on all three variants. Maximum power is rated at 86 bhp at 7500 rpm, and peak torque of 88 Nm comes in at 4,750 rpm from the 1,079 cc, L-twin engine. And each variant has the same electronics package. There's ride-by-wire, with a choice of three riding modes. Active mode has full 86 bhp on tap, with an aggressive throttle response; Journey also has the full 86 bhp, but throttle response is somewhat muted; and City has power dialled down to 75 bhp, and throttle response is muted even further. 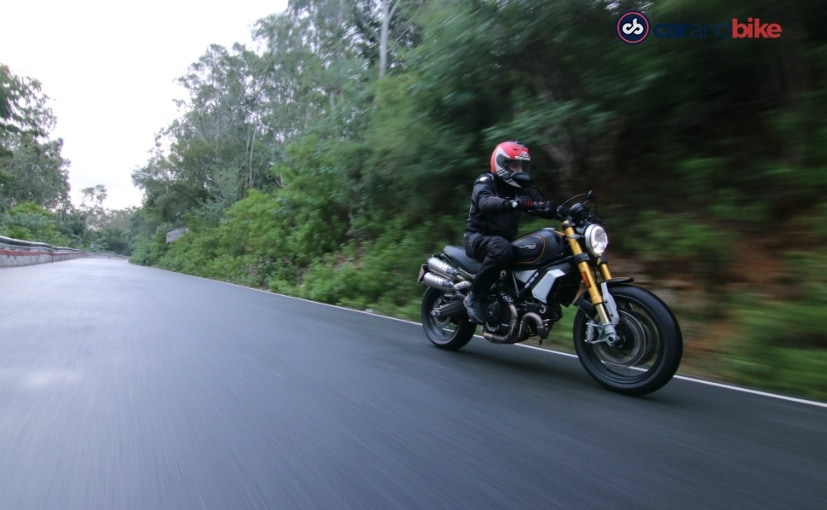 (There's ride-by-wire, with a choice of three riding modes)

Additionally, the Scrambler 1100 now comes with a four-level traction control, which can also be switched off, and a Bosch inertial measurement unit (IMU), which feeds lean angle measurements to control the cornering ABS, traction control and even the self-cancelling turn indicators. IMUs are usually available on top-shelf superbikes, and it certainly speaks a lot about the Scrambler 1100's level of equipment and technology.

A bigger Scrambler with more performance and all that safety tech - has to be a mad hooligan, right? That's what we sought to find out, as we rolled out towards our pre-designated testing grounds on the outskirts of Bengaluru - Nandi Hills, to be precise. Getting to our location involved a fair bit of riding through bumper and bumper traffic, and through narrow roads with surfaces more suited for adventure bikes with longer travel suspension. And then it was a few kilometres of high speed action along a six-lane highway, before we turn off into a two-lane country road and then climb up to twisty heaven. 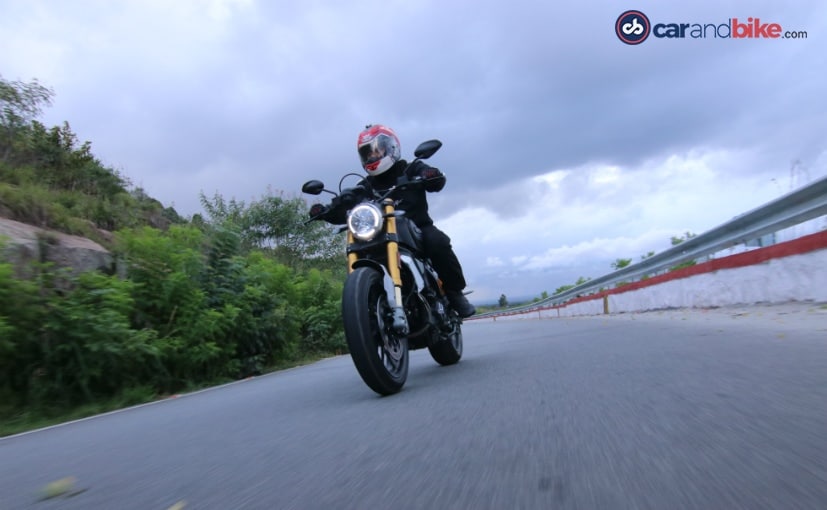 (Additionally, the Scrambler 1100 now comes with a four-level traction control, which can also be switched off, and a Bosch inertial measurement unit (IMU))

Within the first few minutes into the ride, several things became clear. The throttle response is smooth and fuelling is spot on. The jerkiness of the first generation Scrambler 800 is gone, and the brakes offer superb bite and progression. Hard braking is without drama, and the Scrambler 1100 can easily sail over lumps of asphalt called speedbreakers, without breaking a sweat. The engine has a plenty of grunt in the low and mid revs, so high speed relaxed cruising comes easy, and the thing pulls from as low as 3,000 rpm at higher gears, and that is something which makes the power delivery feel easier and smoother.

The test route involved a fair bit of broken patches and king size potholes, and that's when you realise that the suspension set-up, even though taut, is harsh, and long hours over broken roads may not be something you're likely to enjoy. Once the climb up to Nandi Hills began, things got a littler interesting, notwithstanding the limited time we had on our hands. The stiff suspension, combined with the taut chassis makes it really easy to throw the bike around a series of corners, and the difference in the front end's grip in the Sport, with top-spec Ohlins suspension, is immediately apparent. 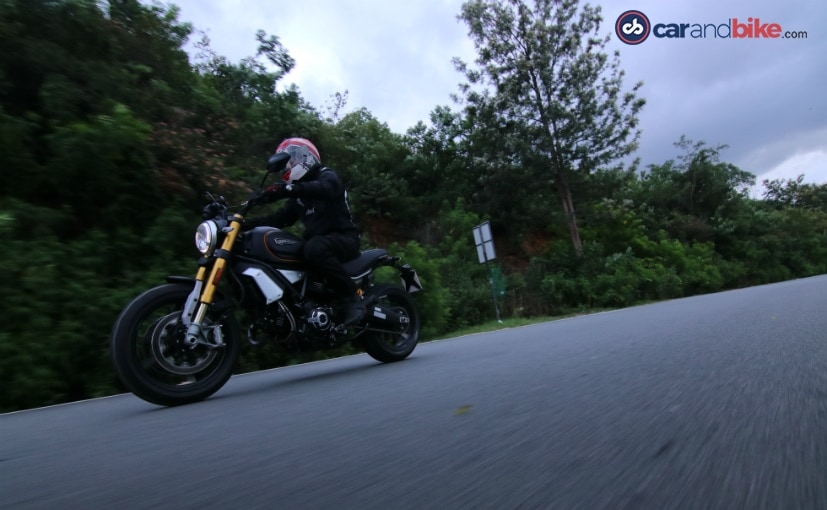 (The jerkiness of the first generation Scrambler 800 is gone, and the brakes offer superb bite and progression)

On the flipside though, thrill-seeking riders will miss the lack of an entertaining top-end. So, there's no spark, no thrill to differentiate the 1100 from being just a great bike to becoming a truly special bike. What is apparent though is that the Scrambler just got bigger, and better with the 1100, just a little more power than the 800, but not too much to intimidate new riders. 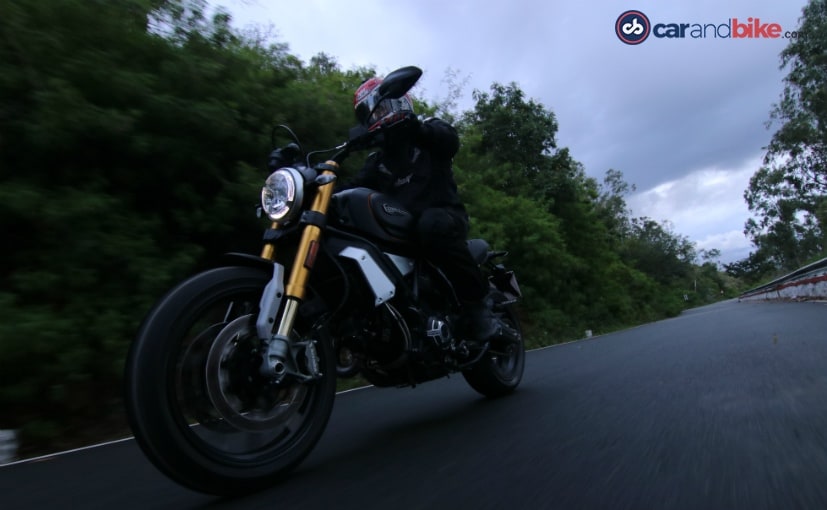 (On the flipside though, thrill-seeking riders will miss the lack of an entertaining top-end)

The only speedbreaker on the road to the 1100's success in India is the pricing. And that will be the deciding factor if the bigger Scrambler can create a substantial fan following in India, just like the smaller Scrambler 800 did. If you're the kind who's into some off-road riding, more often than not, then the Desert Sled is still your best bet within the Scrambler family. But if you're willing to spend a little extra for slightly more performance, and a lot more technology and safety, by all means take a look at the 1100.