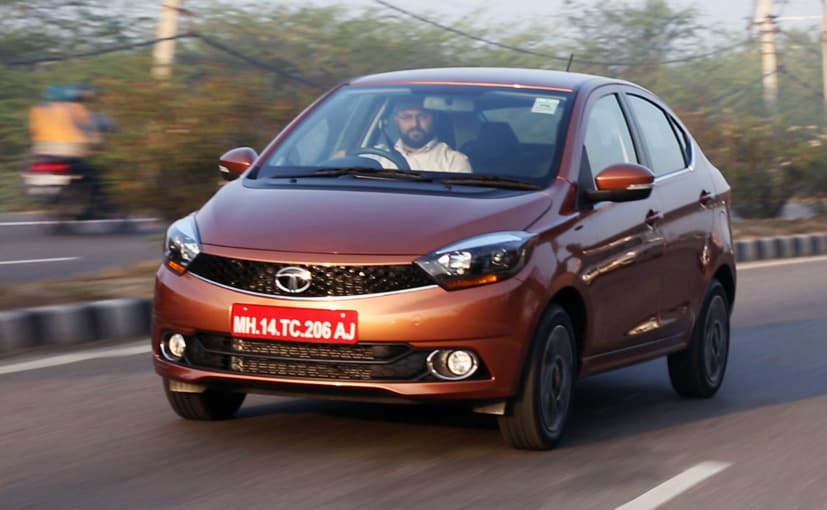 The Tata Tigor is the third sub 4-meter, subcompact sedan from Tata Motors. Going up against the likes of the Maruti Suzuki Swift Dzire, Honda Amaze, Hyundai Xcent, Volkswagen Ameo and the Ford Figo Aspire, but priced between Rs 70-90 thousand less than all its main rivals, the Tata Tigor has the potential of being in its very own ‘entry level subcompact sedan’ segment. Incidentally, Tata Motors originally invented the whole sub 4-meter, subcompact sedan segment in the first place. So, let us take you through the petrol and diesel engines, the features on the Tata Tigor and most importantly – if it is worth your money!

The Tata Tigor is essentially the compact sedan version of the Tata Tiago hatchback. The front end is very similar in terms of design but the Tigor does get a much nicer front grille with hexagonal design elements and a twin barrel headlamp with a projector low beams and halogen high beams. 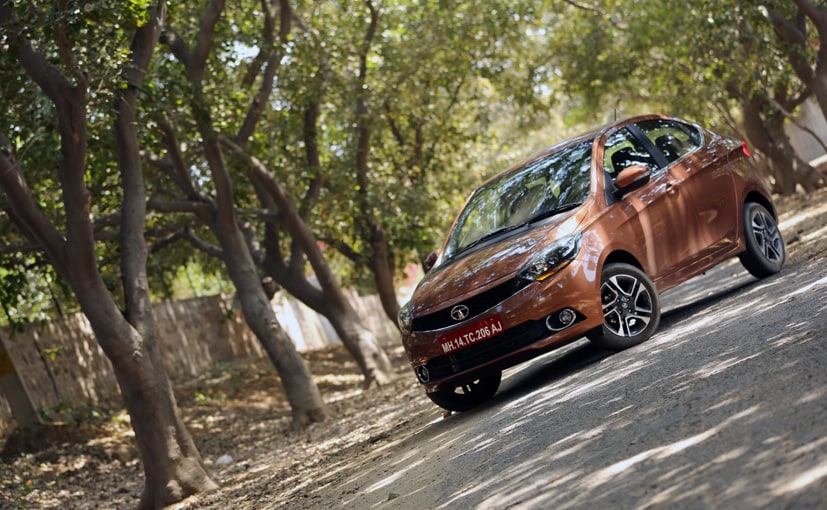 That said, LED daytimes running lights have been given a miss. The petrol version of the Tigor gets 15-inch, diamond cut and black, two tone wheels that sync extremely well with the rest of the cars design but the diesel only gets a set of smaller 14 inchers. 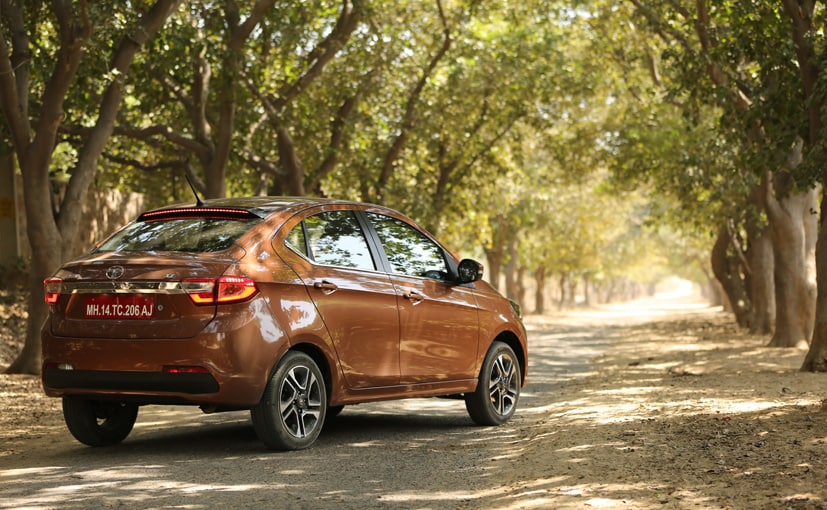 But it is the rear that really stands out. Not only has Tata Motors absolutely nailed the almost coupe like styling of the roofline but the boot integration too. Without a shadow of a doubt, the Tigor is the prettiest and most well-balanced sub 4-meter sedan in India! And then you have smaller elements that stand out. Like the high mounted subtle roof spoiler with the built in tail lamp that glows end to end to the tail lamps that pop out of the boot structure in a three dimensional way. The rear bumper too has a large chunk of plastic that gives it a sportier edge. 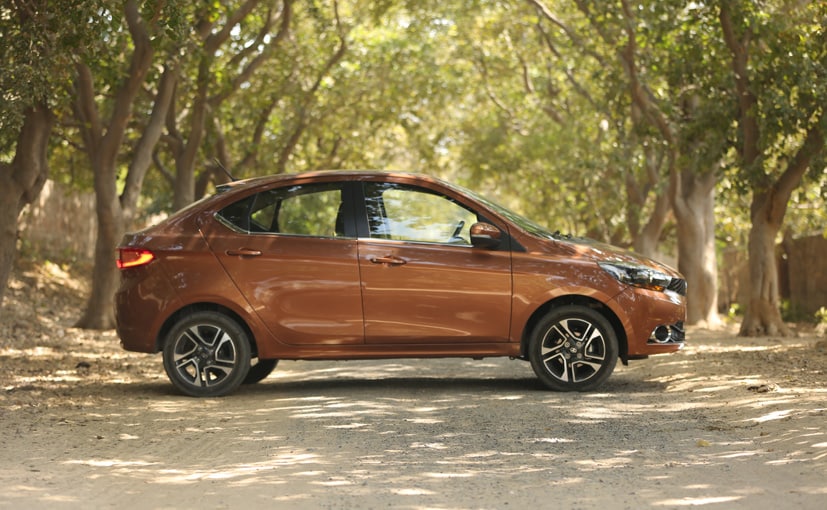 In terms of overall design, the dashboard looks pretty much the same as the one on the Tiago. But the Tigor gets a boatload of extra features. To start off with, the Tigor gets a touchscreen infotainment system with Mirrorlink. This means that you can pair your phone and get navigation updates and media updates on the screen. Now, ideally, Apple CarPlay and Android Auto compatibility would have been a lovely additional feature to have, but Tata Motors has given it the expected miss. The higher variants also get climate control and the dashboard itself has a solid feel to it (in terms of build quality) and just like the Tiago, you also get colour coded AC vent surrounds. The instrument cluster in easy to read and clear and the silver painted surround looks distinctively different. 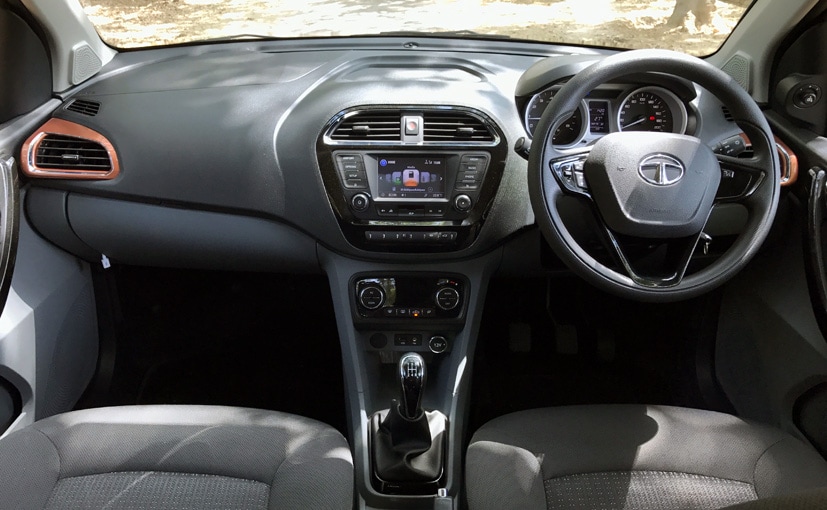 The Tigor though will be used more as a family mover than anything else. And thus, rear seat comfort is key! As compared to the Tiago, the Tigor gets 50mm more wheelbase which means more space in the rear for passengers. There is more than enough legroom at the rear and the Tigor’s seat is just about wide enough to fit three passengers. This is mainly due to the scooped out door panels and the fact that a rear AC vent module does not take up the centre passenger leg space. That said, in India’s hot and humid climate, a set of rear AC vent would have been a much more usable feature than a tad bit more legroom. 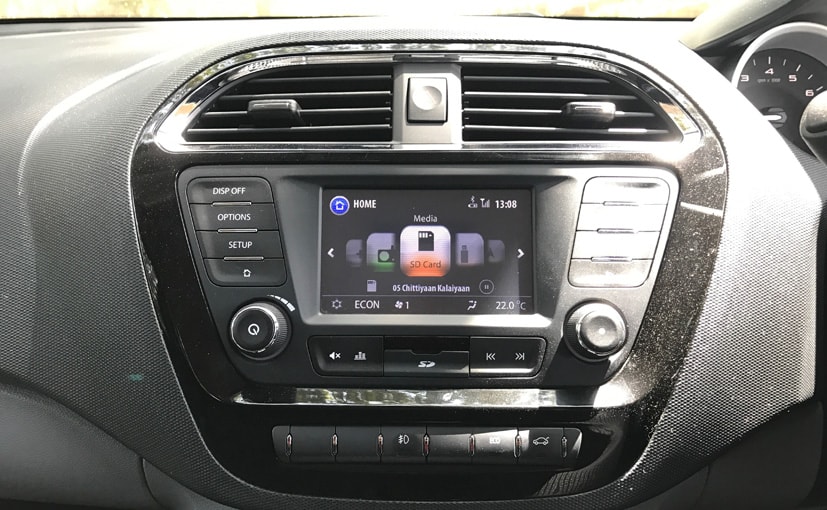 And talking about usable features, the Tigor’s rear bench seats get a flip down hand rest with two cup holders – a feature that is in our opinion an absolute necessity on all vehicles! The rear seat head rests are non-adjustable but Tata Motors have adjusted the foam density to make them supple enough to be supportive and yet extremely comfortable. 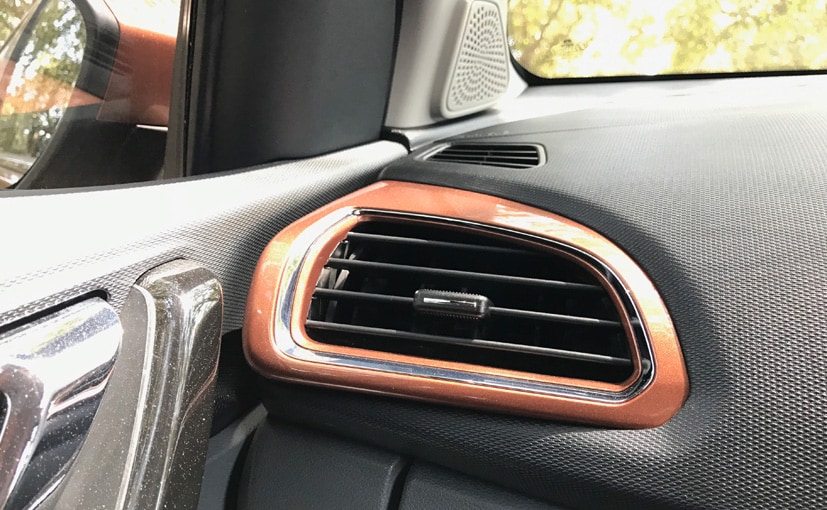 The Tata Tigor diesel and petrol are both three cylinder engines that have been carried forward from the Tiago hatch. The petrol is a 1.2 litre motor making 84 bhp and 114 Nm of peak torque. The turbocharged 1.05 litre diesel on the other hand is less powerful and makes only 69 bhp but makes a lot more torque at 140 Nm. So what are they like? 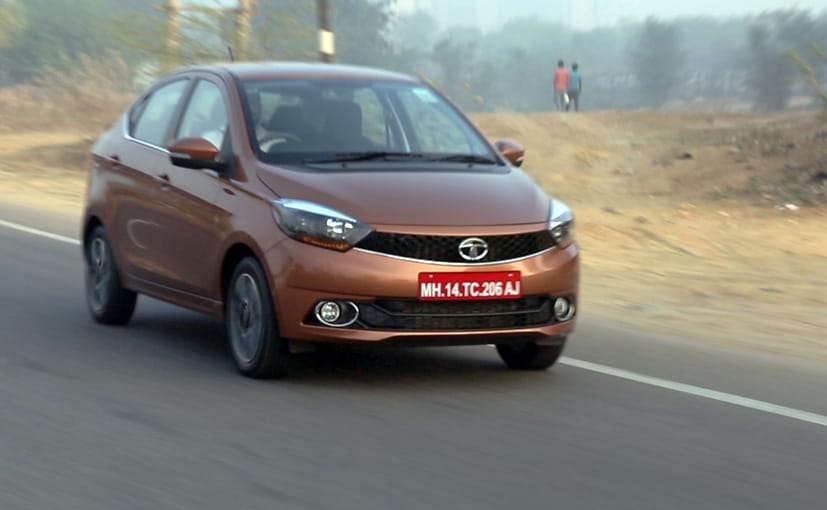 Well, lets begin with the petrol. Although it does have some impressive specs on paper, the Tigor petrol engine does disappoint a tad bit as it still feels a little laggy and underpowered on the road. The NVH levels too are higher than expected, especially when revved all the way to its red line at about 6000 rpm, which might be an issues especially since a subcompact sedan is used mainly as a family mover. 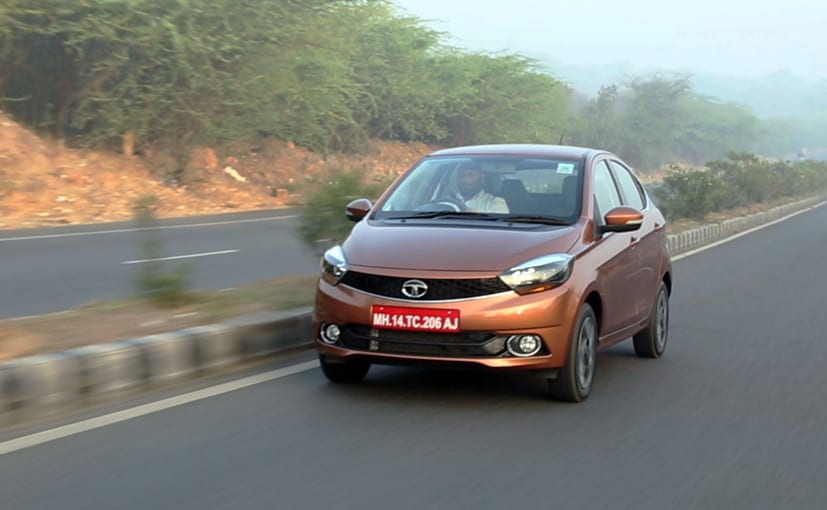 Tata Tigor Gets Both Petrol And Diesel Engines

The diesel on the other hand is less powerful on paper at 69 bhp but it makes more torque at 140 Nm. The diesel turbo engine also feels a little more responsive than the petrol and a lot more drivable especially around the city. Both though have one big positive – they are easy to drive. With a light and yet responsive clutch and a slightly clashy but well weighed gear shift, the Tigor does not wear you out in traffic. 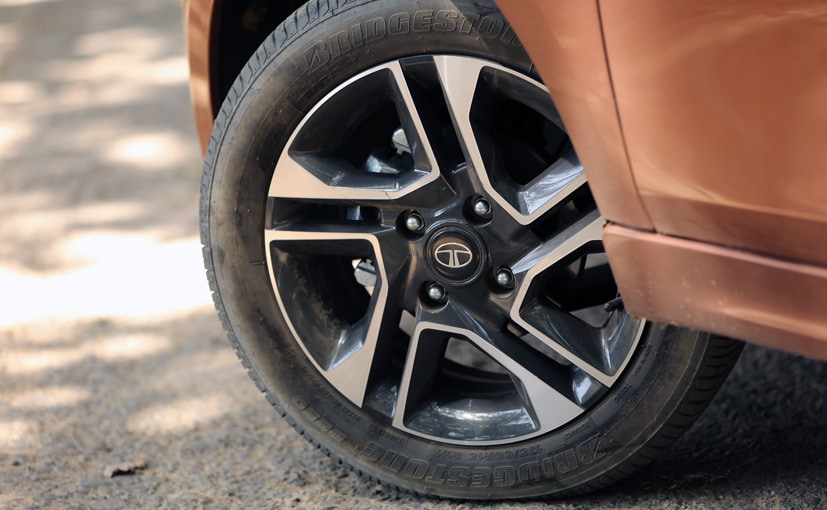 The Tata Tiago has one big plus point – its ride and handling balance. And the Tigor, with its longer and more planted wheelbase and larger wheels and tyres takes it to a notch higher. Both slow speed steering feedback and high speed cornering is impressive. There is a very slight hint on under steer but then that is barely noticeable as this is after all a family car and will almost never be driven to its full capacity by the average Joe. The steering wheel itself, passed down from the Bolt has great ergonomics, which is very helpful in case you feel the need to throw the Tigor around a bend or two! 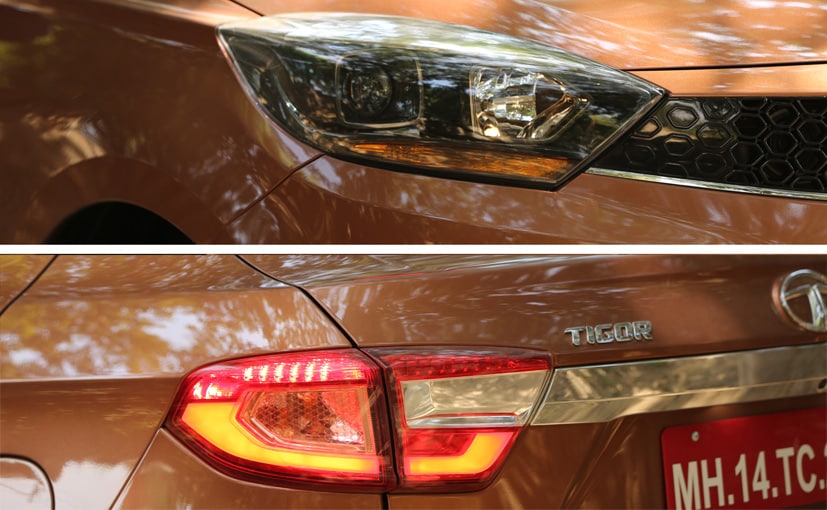 Ride quality too is impressive and the Tigor manages to take most bumps and undulations without much complaint. There is a hint of bump steer – but then considering how bad most of our Indian roads actually are, that is expected. The Tigor gets Anti Lock Brakes (ABS) as standard and braking is impressive. The petrol and the diesel (even with its extra 40 kg kerb weight) feel very confident while braking hard and even under urban driving conditions, the brake feedback is ideal. And while on the safety front, the Tigor also offers dual airbags as a part of standard equipment. Now with prices ranging from Rs 4.70-7.09 lakh, the Tigor, as we mentioned earlier is priced about Rs 60 thousand less than its nearest competition, the Maruti Suzuki Swift Dzire for its cheapest variant. The higher spec and more expensive variants are priced even lower compared to the competition with a difference of between Rs 1.0-1.3 lakh in some cases. This makes the Tigor a great value for money proposition.

The Tigor rides and handles well, is very well equipped, spacious and frankly, thoughtfully engineered. And although we wish the engines were a little peppier and more refined, one of the biggest reasons we think the Tigor will be popular will be because of how it looks. As a package, the Tigor is extremely well suited for any Indian family who wants to upgrade from an entry level hatchback but still wants a three box design.