BMW has unveiled the updated i8 sports car at the Los Angeles Auto Show, and joining the model is the new i8 Roadster drop-top. 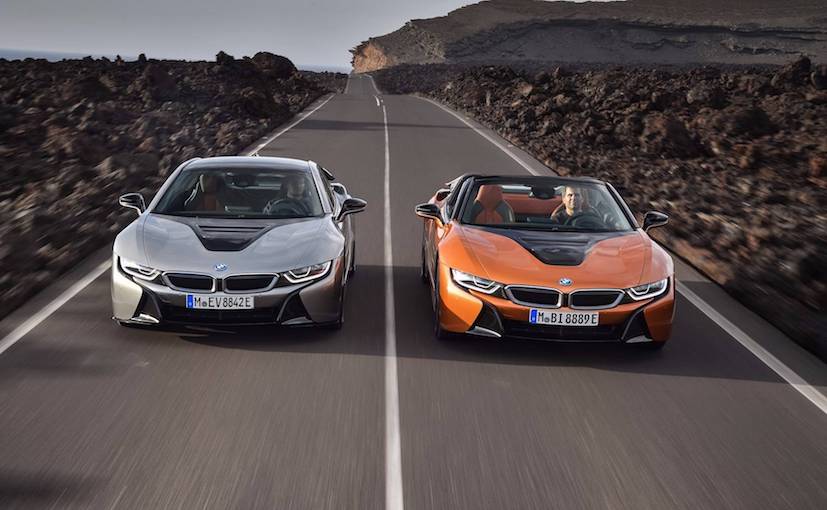 The BMW i8 first made its debut in the concept form almost eight years ago and is one of the more envious sports cars of modern times. While the i8 Coupe has been around for a while now, the German auto giant has dropped the sheets off the production spec i8 Roadster, which is the drop-top convertible version of the hybrid coupe. The new soft-top convertible arrives after months of speculations, spy shots and countless number of teasers from BMW. For the 2018 edition, the i8 Coupe also gets considerable changes while the plug-in hybrid system has been spruced to put out more power as well. 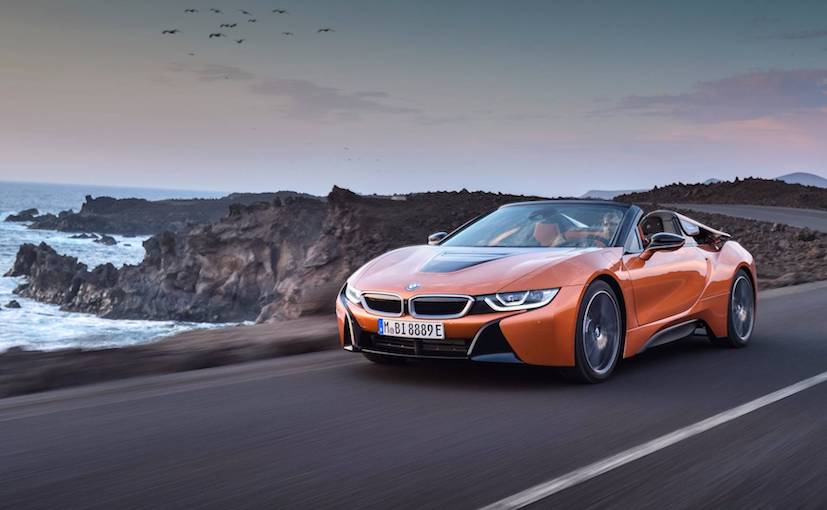 At the outset, the design language remains the same on the 2019 BMW i8 Coupe and Roadster while getting a subtle refresh. The kidney grilles are now larger and a flat underbody. The i8 Roadster also ets air ducts located between the rear lights and roof frame, for improved aerodynamics and effciency. There's a new e-Copper metallic finish on offer, while the Roadster comes with only two seats, unlike the Coupe. However, given the rear seat space is negligible on the i8 Coupe, we don't see it as much of a problem. The major difference on the BMW i8 Roadster though is the absence of a metal roof in favour of an electric canvas hood that can be folded down in just 16 seconds at speeds up to 49 kmph. There are also new 20-inch BMW i lightweight alloy wheels with a bi-colour design. 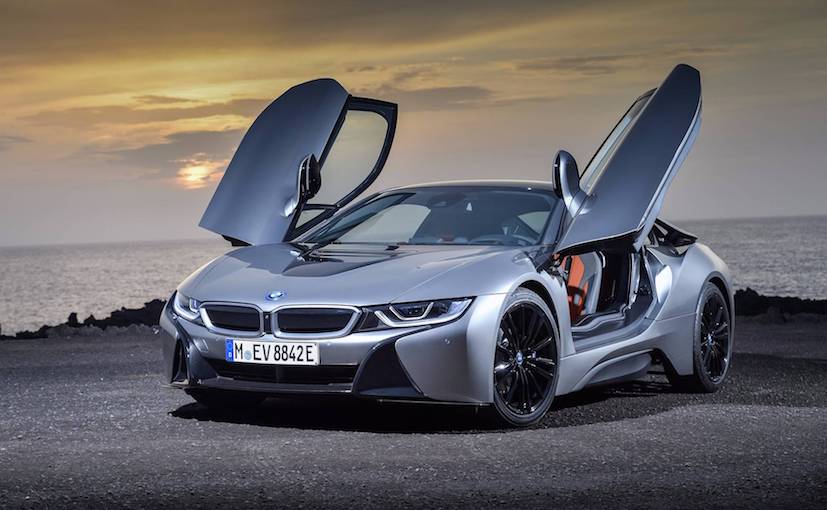 Inside, the revised BMW i8 and i8 Roadster gets an updated sports steering wheel, a multi-function instrument display, and an 8.8-inch freestanding touchscreen control. The plug-in hybrid sports car comes with full leather upholstery. BMW has ensured to maximise on weight savings and the new i8 Roadster uses aluminium connecting mechanisms that were sculpted entirely using 3D printing. This not only ensures lighter weight, but higher accuracy as well. There has been soundproofing added to the convertible for a more comfortable ride. 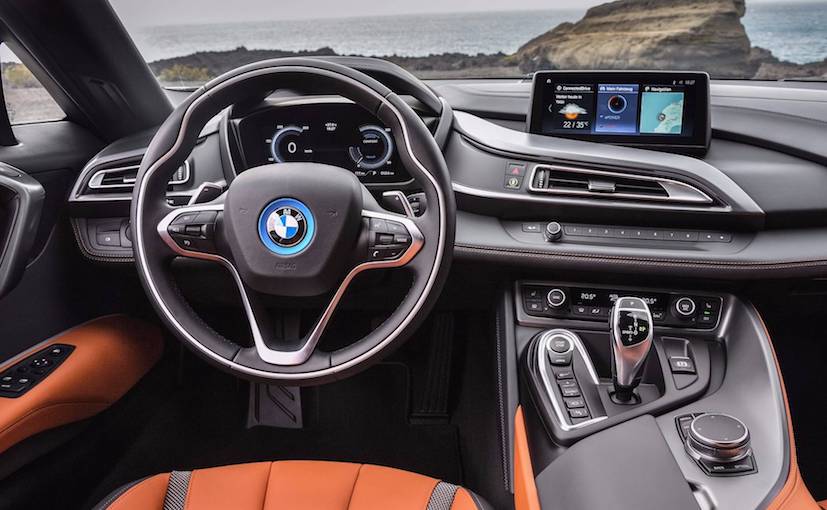 (The 2019 BMW i8 gets a new multi-function display and a new floating 8.8-inch touchscreen system)

The all-season canvas fabric takes the space is neatly stowed in the space behind the seats, while you get additional cargo compartments between the roof box and the seats for around 3.5 square feet of storage space.

While the drop top remains the highlight on BMW's flagship offering, the carmaker has also spruced up the power output on the 2019 i8 and i8 Roadster. The new BMW eDrive system on the car has extensively worked upon with the 1.5-litre three-cylinder petrol engine and two electric motors continue to be used. The larger 11.6-kilowatt hour battery pack replaces the outgoing 7.1-kWh unit and power has been uprated to a combined output of 369 bhp, 12 more than the current version. 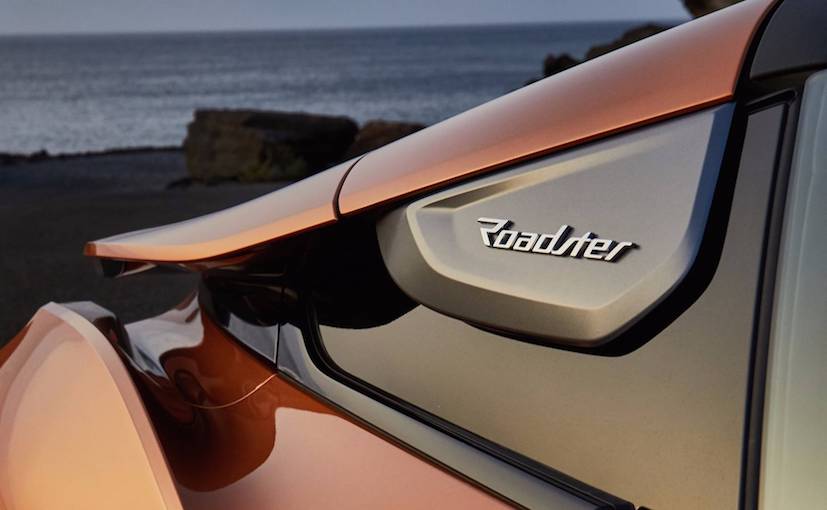 The updated BMW i8 Coupe is also faster than the current model and can sprint from 0-100 kmph in 4.2 seconds, while the i8 Roadster can do the same run in 4.4 seconds. The lag in time comes from the slightly heavier nature of the convertible which is about 60 kg more than the Coupe (1593 kg), thanks to the reinforced chassis and drop down parts. The top speed on both models remains electronically limited to 250 kmph. 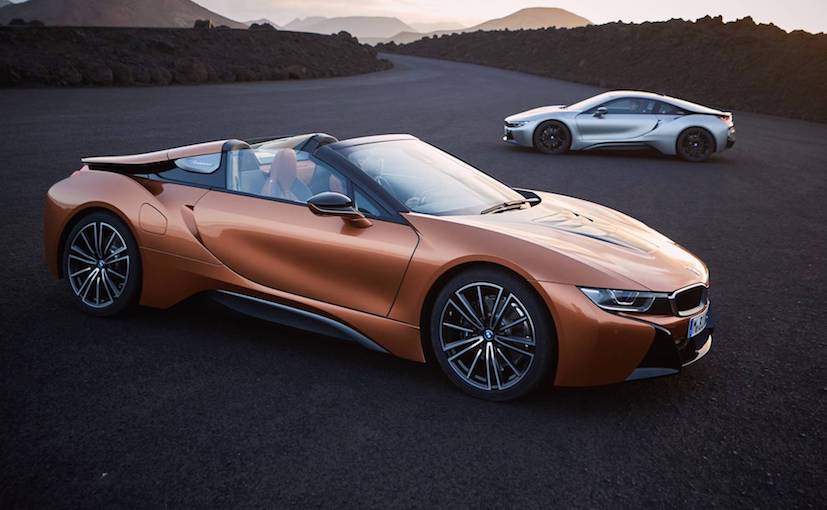 The 2019 BMW i8 twins continue to use a 6-speed transmission that sends power to all four wheels. You can select from a number of modes as well including Comfort, Sport, Eco Pro in the Hybrid mode, and Comfort and Eco-Pro when going all-electric. Thanks to the bigger batteries, the BMW i8 can now travel up to 28 km in a single electric charge, while it promises a combined fuel efficiency of 30 kmpl in the US driving cycle.

Sales for the BMW i8 and i8 Roadster will commence globally early next year and you can expect the models to make their way to India as well sometime in 2018.

Lamborghini Aventador
₹ 4.79 - 5.32 Crore *
Subscribe to Our Newsletter
Over 1.5+ Lakhs subscribers
Thank you for Subscribing to Us