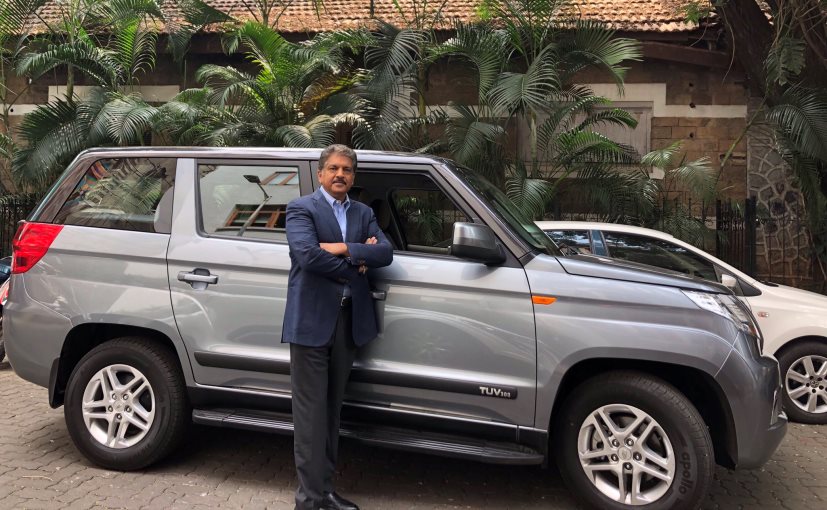 Mahindra Group's top boss Anand Mahindra has time and again added the company's cars to his garage. While we know of his Mahindra XUV500 and the kitted-up TUV300 from the past, the Mahindra chairman has now taken delivery of the TUV300 Plus and shared an image of his new prized possession in a tweet and surely the netizens were pleasantly surprised as well. The tweet has been garnering a lot of praise from the brand's owners and fans alike, but has also made way for some hilarious replies by both the twitteraties and Mr. Mahindra.

She finally arrived..My TUV 300 Plus. My chaps had kept me waiting...But it was worth the wait; they gave me this special steel-grey metallic paint. Yes, I had to give up my TUV 300 Green Monster, but now I have this beauty and I’ve named her the Grey Ghost.. pic.twitter.com/5Qw62ZdU9t

The Mahindra TUV300 Plus was launched earlier this year as a elongated, 9-seater version of the sub 4-metre TUV300 boasting of a bigger engine and more features as well.

I’ve never used anything other than a Mahindra car... https://t.co/wTWF76Xzof 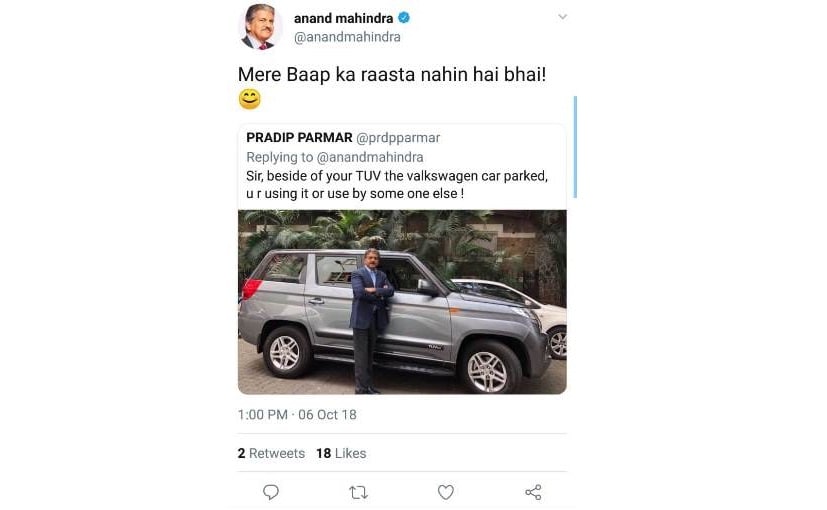 Some users tried to find out about Mr. Mahindra's other vehicles but in vain

Anand Mahindra's TUV300 Plus is finished in a special steel-grey metallic paint scheme and the chairman has aptly nicknamed the car 'Grey Ghost.' The car gets a dual-tone paint scheme with a black roof but is said to be otherwise completely in its stock avatar. The new TUV300 replaces the camouflaged green finished TUV300 in Mr. Mahindra's garage, but joins the XUV500 since he is allowed to keep two company cars.

U have the right Tyres on her @apollotyres. Congrats Sir

Apollo tyres Vice Chairman and MD, Neeraj Kanwar also took to Twitter to congratulate Mr. Mahindra on the right choice of tyres. The TUV300 Plus comes with Apollo tyres as standard.

The Mahindra TUV300 Plus is visibly larger than its sub 4-metre sibling sporting an increased length of 405 mm. The wheelbase though remains the same at 2680 mm on the multi-seater. The cargo space has also increased by a substantial margin, albeit with the rear seats folded.

Visually, the Mahindra TUV300 Plus is identical to the standard TUV but comes with a revised front bumper and wraparound taillights to distinguish it from the latter. The multi-seater also rides on 16-inch alloy wheels. Inside, changes are more substantial with the faux leather seats, height adjustable driver's seat, 7-inch touchscreen infotainment system with GPS navigation, Bluesense app, ABS, dual airbags, EBD and more.

Under the hood, the Mahindra TUV300 Plus gets the 2.2-litre mHawk diesel engine in place of the 1.5-litre diesel on the standard TUV300. The motor is tuned for 120 bhp and 280 Nm of peak torque, while paired with a 5-speed manual transmission. The TUV300 Plus is priced between ₹ 9.59 lakh and ₹ 10.98 lakh (all prices, ex-showroom Delhi) across four variants.