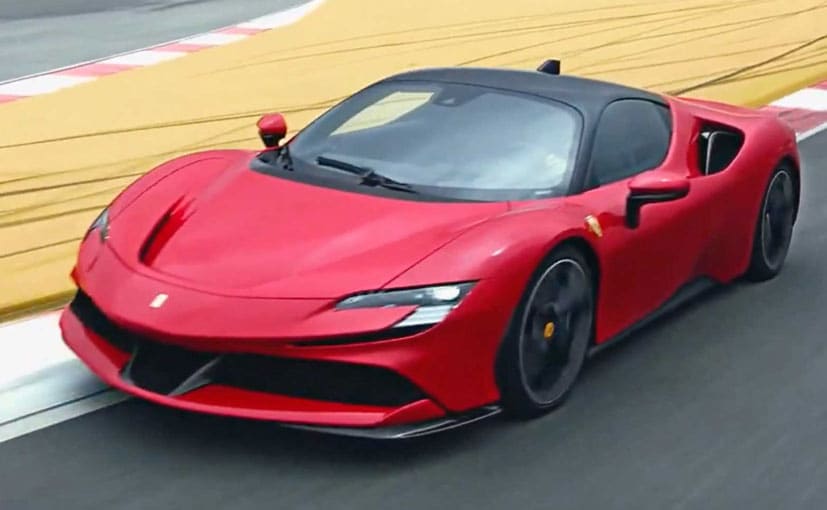 Ferrari introduced a new chapter in its history with the introduction of its first series production Plug-in Hybrid Electric Vehicle. It's called the SF90 Stradale and as you would expect from a Ferrari, the model is extreme on every level. The car's name gives reference to the 90th anniversary of the foundation of Scuderia Ferrari and underscores the strong link that has always existed between Ferrari's track and road cars. But let's get to the engine straight away. The SF90 Stradale has a 90 degree V8 turbo engine capable of delivering 768 bhp horsepower, the highest power output of any 8-cylinder in Ferrari's history. Ferrari then packs three lithium-ion powered electric motors - one located on the rear axle, and two located up front - in the SF90 Stradale. These motors are capable of making 217 bhp taking the total output to 986 bhp. 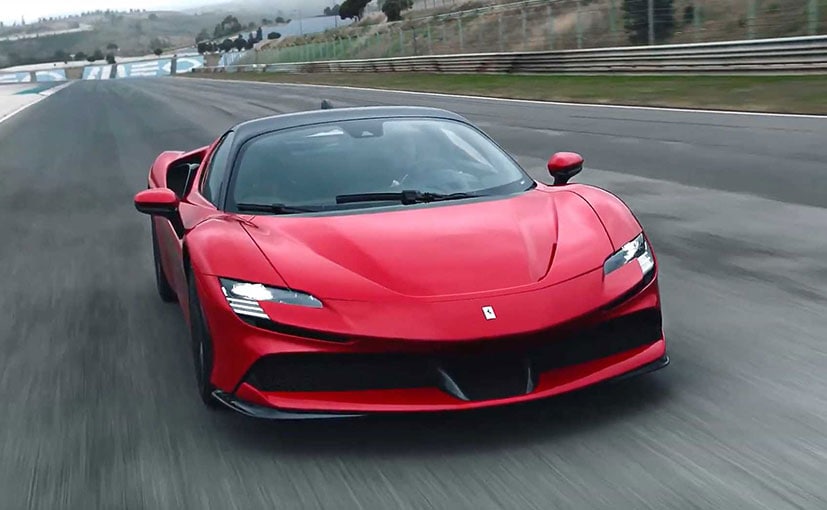 The SF90 Stradale has a 90 degree V8 turbo engine capable of delivering 768 bhp horsepower, the highest power output of any 8-cylinder in Ferrari's history.

The sophisticated control logic takes care of the rest, managing the flow of power between the V8, the electric motors and the batteries. The SF90 Stradale is also the first Ferrari sports car to be equipped with 4WD. This helps it go from 0-100 kmph in 2.5 seconds, while 0-200 kmph is done in just 6.7 seconds. Ferrari's engineers were able to further broaden the spectrum of dynamic controls by introducing the full-electric front axle, known as the RAC-e (electronic cornering set-up regulator). As well as exclusively providing propulsion in electric drive, the two front motors independently control the torque delivered to the two wheels, extending the concept of Torque Vectoring. Fully integrated into the car's vehicle dynamics controls, the RAC-e governs the distribution of torque, making driving on the limit much simpler and easier. A high performance Li-ion battery provides power to all three motors and guarantees a 25-kilometre range in all-electric eDrive mode, using just the front axle. When the internal combustion engine is turned off, the two independent front motors deliver a maximum speed of 135 kmph. Starting with a fully charged battery, the car can cover up to 25 km in this mode. 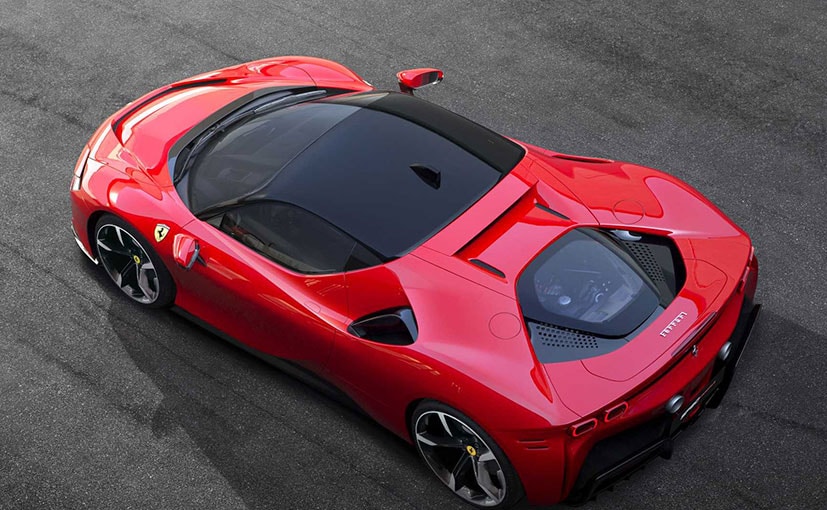 The rear of the Ferrari SF90 Stradale is dominated by high exhaust pipes which are the result of optimisation of the exhaust line layout.

The introduction of this hybrid architecture was a challenge with regard to managing the additional weight which was resolved by an obsessive attention to detail and the overall optimisation of the whole of the car. For maximum performance in terms of overall weight, rigidity and centre of gravity, the chassis and bodyshell of the SF90 Stradale is all new, built using multi-material technology, including, for example, carbon fibre. The development of a hybrid car of this kind demanded the development of a series of innovative aerodynamic solutions. The significant boost in the power unit's performance brought with it an increase in the amount of heat energy to be dissipated and required the development team to carry out an in-depth review of the aerodynamic flows on the radiating masses. It also demanded new solutions to increase downforce efficiently and guarantee maximum stability at all speeds and in all driving conditions. 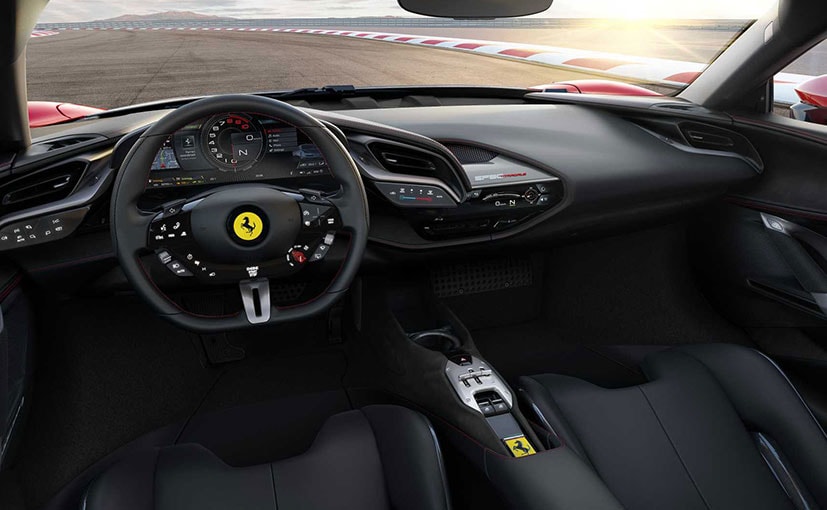 The cockpit of the Ferrari SF90 Stradale sees the track-derived "eyes on the road, hands on the wheel" philosophy

The cockpit has a smaller frontal section and is placed closer to the front of the car to reduce drag. This was also achieved without impacting on-board comfort. The track-derived "eyes on the road, hands on the wheel" philosophy takes on a truly central role for the first time too, significantly influencing the ergonomics and styling of the interior. The result is an HMI (Human-Machine Interface) and interior layout concept that are a complete departure from previous models. Another major innovation is the steering wheel which now has a touchpad and a series of haptic buttons that allow the driver to control virtually every aspect of the car using just their thumbs. The central instrument cluster is now entirely digital with the first automotive application of a 16" curved HD screen which can be fully configured and controlled using the controls on the steering wheel. On the central tunnel, improved ergonomics have been combined with an element from the past: the automatic gearbox controls are now selected by a grille-style feature that references Ferrari's legendary manual gear-shift gate.

The compact bubble-shaped cabin has an aeronautical cockpit feel and the fact that it has been shifted so far forward is further emphasised by the geometry of the two bodycoloured rear flying buttresses that enclose the rear. Another signature solution is the headlights which hail a move away from the L-shaped look, to a slender slit design integrated with the brake air intakes resulting in a characteristic C-shape which lends the front of the car an original and futuristic appeal. In an absolute first for a Ferrari, the SF90 Stradale uses matrix LED headlight technology to improve visibility in all driving conditions thanks to active beam control. The rear of the car is dominated by high exhaust pipes which are the result of optimisation of the exhaust line layout. Because the power- train is significantly lower in the car than in the past, the designers were also able to lower the car's tail. The tail lights have evolved quite radically from Ferrari's iconic round shape. The eye-catching, more horizontal luminous rings create a more horizontal perception of the tail lights which in turn visually lowers the height of the tail. 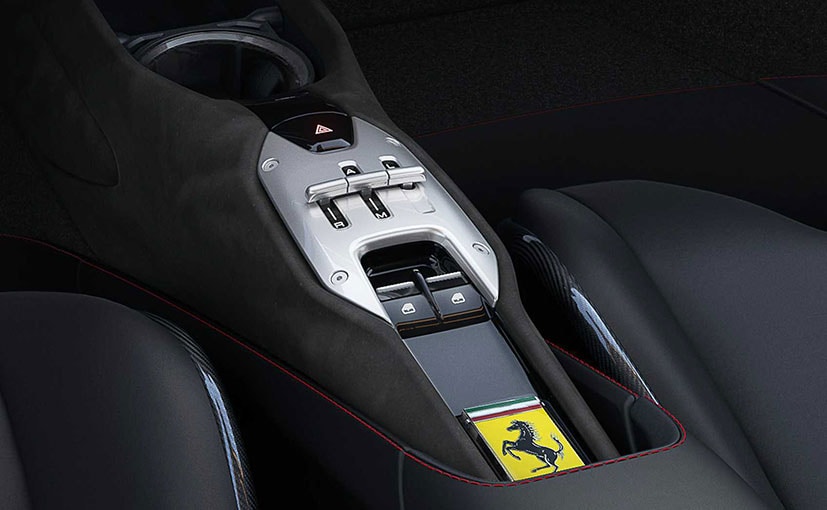 The Ferrari SF90 Stradale gets an 8-speed automatic gearbox

While the SF90 Stradale's exterior was crafted to underscore its seamless combining of form, technology and performance, the interior is even more radical. The very explicit aim there was to create a cockpit that ushered in an entirely new design direction, the effects of which would carry over into Ferrari's entire future range. The designers took a futuristic approach to the interface concept with a strong focus on creating a wraparound aeronautically-inspired cockpit with particular emphasis on instruments. This further emphasised and underscored the symbiotic relationship between car and driver. In fact, the SF90 Stradale makes an epoch-changing leap forward both in formal and content terms, updating the Human Machine Interface with all-digital technology. In a first for a Ferrari, the central instrument cluster comprises a single 16-inch digital HD screen which curves towards the driver to make it easier to read and to emphasise the F1-style wrap-around cockpit effect. This is the first time this type of screen has been adopted in a production car. When the engine and motors are off, the onboard instruments go black lending the cockpit a wonderfully sleek, minimalist look. In line with Ferrari tradition, the default screen is dominated by a large circular rev counter which, however, this time is framed by the battery charge indicator. The navigation screen is on one side of the rev counter with the audio control one on the other.