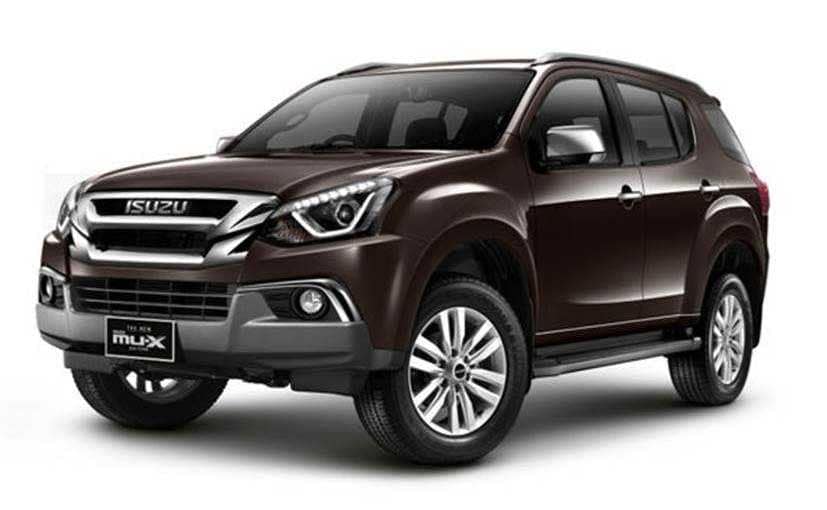 Isuzu Motors India will be introducing the updated MU-X facelift in the country on October 16, 2018. The Isuzu MU-X SUV was first launched in India in May 2017, and is all set to get comprehensive changes over the outgoing version. Visual upgrades on the Isuzu MU-X facelift include projector headlamps with LED daytime running lights, reworked front grille and bumper. The fog lamps are larger now and sport chrome inserts for a premium touch.

At the rear, the Isuzu MU-X facelift will also sport revised taillights, new bumper styling and a large roof spoiler at the rear. The SUV remains largely unchanged in design, as seen in the spy shots, but will sport new alloy wheel design. It's not clear on what changes the updated Isuzu MU-X facelift will sport in the cabin. That said, do expect to see new upholstery for the seats, and new creature comforts too.

With respect to power, the Isuzu MU-X facelift is likely to continue using the same 3.0-litre diesel engine from the current model. The oil burner is tuned to produce 174 bhp and 380 Nm of peak torque. The engine is offered only with a 5-speed automatic transmission, while there's a 4x4 Terrain Command variant on offer with the shift-on-fly dial. Internationally though, the MU-X facelift was downsized to a 1.9-litre diesel for South East Asian markets.

The Isuzu MU-X facelift is a seven-seater full-size SUV and competes against a host of offerings including the Toyota Fortuner, Ford Endeavour, Skoda Kodiaq and will also lock horns against the upcoming Mahindra Y400 (codename), which is based on the new generation SsangYong Rexton. With the festive spirits high this year, the updated version is likely to help the brand push the MU-X, in addition to the D-Max V-Cross pick-up truck. The Isuzu MU-X is currently priced from ₹ 24.83 lakh (ex-showroom, Delhi).

Suzuki Motorcycle India To Introduce A New Two-Wheeler In October
Subscribe to Our Newsletter
Over 1.5+ Lakhs subscribers
Thank you for Subscribing to Us