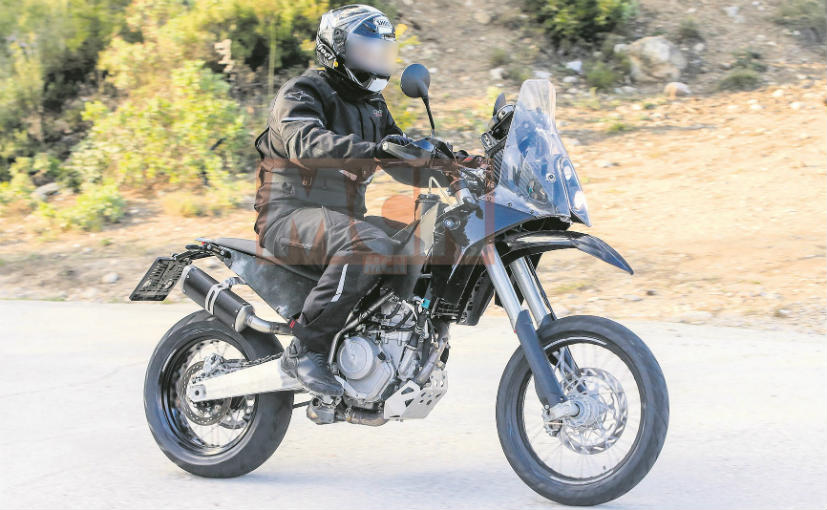 The bodywork still doesn't seem production spec, so expect a lot of changes as the model evolves over the next few months while KTM tests and develops it closer to production-spec. The fuel tank seems to be an early aluminium prototype too, but expect much more capacity than the 390 Duke, and more range between fuel stops. The engine is the same as the KTM 390 Duke, a 373cc, single-cylinder, liquid-cooled engine making 43bhp power and 35Nm torque, but expect a remap with a slightly different power map and torque curve suited for taking on the rough.

The bike has WP forks and a 19-inch wire-spoked front wheel, indicating that this indeed is the new baby-ADV bike from KTM with limited off-road intent of the bike, rather than being just a road-oriented tourer. The front end on the test mule seen here, has carbon fibre bits, but these are unlikely to make it to the production model. At the rear, there's a new, beefier swingarm and an offset shock.

The new KTM 390 Adventure is expected to be launched as a 2018 model with the bike expected to be unveiled for the first time at the 2017 EICMA Motorcycle Show. In India, the KTM 390 Adventure will go up against the likes of the Royal Enfield Himalayan and the upcoming BMW G 310 GS. As mentioned, the bike is still under the early stages of prototype testing, so there's no word on expected prices yet. If KTM manages to price it between Rs 2.5-2.75 lakh in India, it's certainly going to be a winner.