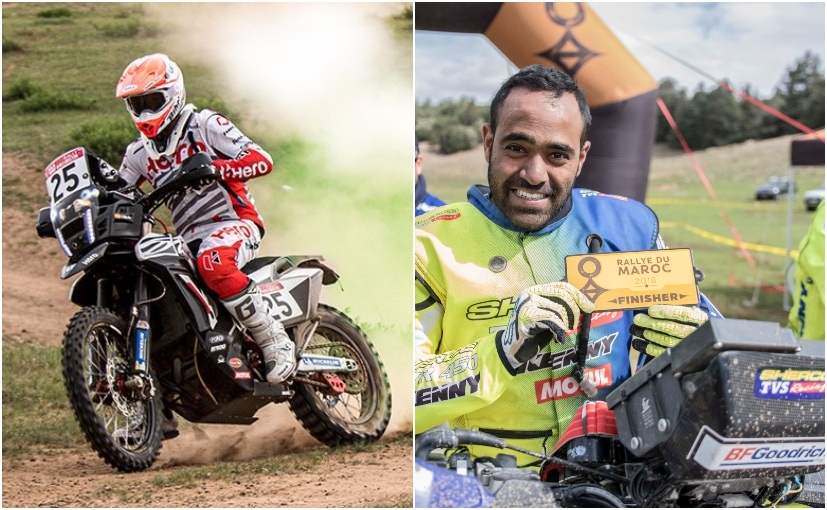 Indian teams Hero MotoSports Team Rally and Sherco TVS Factory Rally Team are fielding riders in the 2019 PanAfrica Rally that takes place between September 21-28, 2019, in Morocco. Hero MotoSports has two riders in attendance Joaquim Rodrigues from Portugal and CS Santosh from India, while defending champions Sherco TVS has four riders on the ground including 2018 champion Michael Metge along with Johnny Aubert from France, Lorenzo Santolino from Span and Abdul Wahid Tanveer from India.

Commenting on the team announcement, B Selvaraj, Team Manager, TVS Racing, said, "The Sherco TVS Rally Factory Team has been performing consistently well at the PanAfrica Rally and we aim to continue our successful performances again this year. The team of seasoned Rally racers will be ably led by defending champion of PanAfrica and winner of Baja Aragon Rally 2019, Michael Metge. This year's team constitutes for an action-packed Rally by the addition of Johnny, Lorenzo, and Tanveer. We are confident of pulling off a great show this year as well."

The 2019 PanAfrica Rally witnesses Johnny Aubert make his debut with the team. The rider has a strong rally experience behind him and finished an impressive sixth in the 2018 Dakar Rally. Meanwhile, Lorenzo Santolino and Abdul Wahid Tanveer too have added multiple rallies and enduro championships under their belts respectively. Meanwhile, both Joaquim Rodrigues and CS Santosh are experienced Dakar riders having proved their mettle in a number of rallies over the years. Privateer Ashish Raorane was also slated to take part in the PanAfrica rally, but injured his ankle during training earlier this month.

Reigning champion Michael Metge, Sherco TVS said, "The PanAfrica Rally is one of the toughest and most gruelling international Rally. We had a great outing last year and I am personally humbled by the title. I have been training religiously, with a good season thus far. I am looking forward to defending my title as well as the team's. We're all in a good shape and excited to put up a good show"

The PanAfrica Rally is an open championship divided across motorcycles, Quads/UTV, SSV (buggies) and is organised in the high dunes of the Sahara Desert. Apart from the soaring temperatures, participants have to deal with the challenging terrain and navigation issues across the 1500 km rally. It is also seen as a stepping stone for the Dakar Rally that makes its debut in Saudi Arabia early next year.