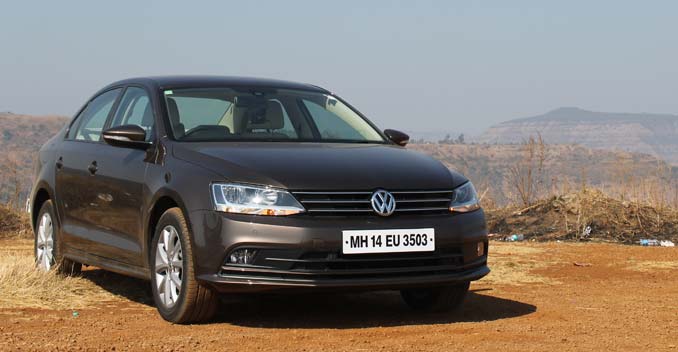 Volkswagen created a lot of buzz when it first announced it was going to bring the new Jetta. Many believed this one would be based on the company's MQB platform, considering that it is already here and the only car made in India on this platform is the Skoda Octavia. Hence, every one was convinced that the upcoming new Jetta was indeed the next generation. However, Volkswagen had different plans.

What you're looking at is the facelift, and not a new generation of the Jetta; this basically implies it is not based on the MQB platform, but the old PQ35. The German carmaker is known for making a difference with a simple nip and tuck, and it proved its prowess with the Polo and Vento.

The same story continues with the Jetta; folks at Volkswagen have made a few changes to the car including, but not limited to, a new front grille, front bumper and fog-lamps. The rear also looks a little different with new tail-lamps and boot lid. Though it can't exactly be counted as a dramatic facelift, the new Jetta does look a bit more grown up now; more Passat - like, if you will. The head-lamps now merge into the front grille, which now has three chrome slats instead of two.

The DRLs along with bi-Xenon head-lamps add to the car's overall appeal and also tend to people's fascination for LEDs. However, only the top-end Highline variant gets 15 day-time running LEDs arranged in an 'L'.

The cabin manages to feel familiar despite the fact that it does sport some changes; there's a new twin-tube instrument cluster, an upgraded infotainment system, and, more importantly, a flat-bottom steering wheel, like the one found in the Polo and the Vento in India. There is little doubt that this addition adds to the car's sporty quotient. Moving on to its dual-tone black and beige interiors, they work on the saloon's 'premium' factor. That being said, I felt the car's overall style statement is a tad bit confused since it's trying to be both, high-end and sporty.

The engines in the new Jetta are still the same. There's the 1.4-litre petrol which churns out 121bhp and develops 200Nm of torque, and the 2.0- litre diesel with the same output as before -138bhp. We asked the people ate Volkswagen if these engines were MQB specced, and promptly received a reply in the negative. In turn, our hopes of seeing a 1.8-litre TFSI are still alive.

Since there are no mechanical changes to the Jetta, it drives just the same as its predecessor. The electric steering might seem to lack feel but is extremely accurate; so snaking around winding roads is incredibly fun. You can't help yourself but attack the corner, and then smile and wait for the next one.

The suspension eats up all the bumps on the road, eventually making for a comfortable ride. Even though the 6-speed manual gearbox is an absolute delight, you can't help but fall in love with the 7-speed DSG dual-clutch gearbox. Its quick shifting helps in hammering your way through any situation. There's power on demand too, with the paddle-shifters; there is a delay of a millisecond in reaction time when you shift up or down, but that is negligible and isn't a big bother.

Sadly, the DSG is available only in the top-end diesel variant and the petrol variant does not get an automatic at all. There are only two variants in the petrol - the Comfortline and Highline, while the diesel gets three - Trendline being the base model.

As far as safety is concerned, the Jetta gets 6 airbags, standard on all variants, along with ABS. There is also a driver fatigue monitoring system that warns the driver via a message on the instrument cluster.

The facelift of the Jetta comes with a few bells and whistles, and is still the mostly the same capable car it always was. Considering that the next generation of the Jetta is due in 2016, this one is clearly an attempt to tackle the competition posed by the likes of the Skoda Octavia, Hyundai Elantra, and the Toyota Corolla. However, with the new-gen car round the corner, we have to ask - was it really necessary?