We pit one of the best 125 cc scooters in India, the TVS NTorq 125, to the newest kid on the block, the big and bold Suzuki Burgman Street. 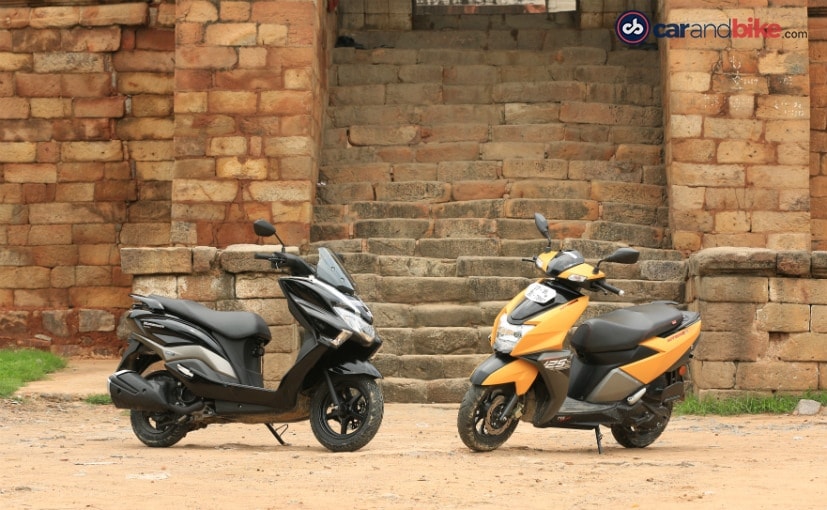 I like scooters. If most of your riding is in the city, I will go out on a limb and say that scooters are the most practical of all two-wheelers. Sure, motorcycles are slightly more engaging to ride, offer better fuel efficiency and maybe look better too, but scooters! Scooters have no gears, they also have underseat stowage and a footboard where you can not only keep your feet but even a grocery bag or two. With increased demand for scooters, manufacturers have now realised India's need for scooters which are a tad sportier, lean more towards performance but have decent enough practicality and offer more features too. This is where the TVS NTorq 125 and the new Suzuki Burgman Street come in. One could be called as the benchmark for the 125 cc scooter segment while the other is a new-comer looking to be the new king of the 125 cc scooter segment.

The Suzuki Burgman Street's biggest USP is the way it looks. It is the first ever 125 cc maxi-scooter in India and the first since the Kinetic Blaze was launched eons ago. The Burgman family of scooters from Suzuki have always been big, be it size or engine displacement and the Burgman Street sure carries forward that bit, at least with respect to the size. The front apron is edgy and angular, consisting of neatly integrated LED headlamp and turn indicators. The muscular front end is topped off with the flyscreen, which gels well with the overall look of the scooter. 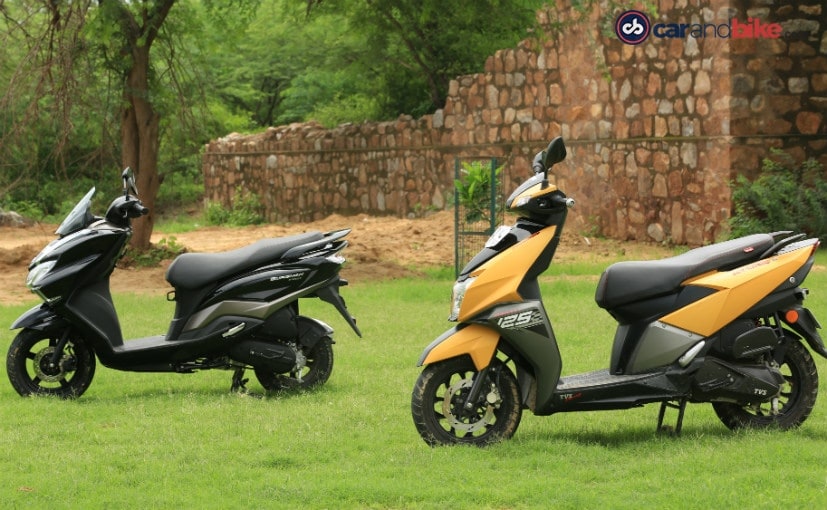 Viewed from the side, the Burgman Street looks sporty, thanks to the silver and black panels with sharp boomerang shaped creases, ending into a wide, angular LED tail lamp at the rear. The maxi-scooter proportions also make for a wide seat with ample room and a comfortable riding position. It is not the handsomest of scooters, the Burgman Street, but it does well to turn heads on the road. We saw that first-hand. The one bit that we did not quite like about the Burgman is its proportions. The body is quite big and the wheels are quite small. In fact, the Burgman uses a 10-inch alloy at the rear which feels too small for the big rear of the Burgman Street. 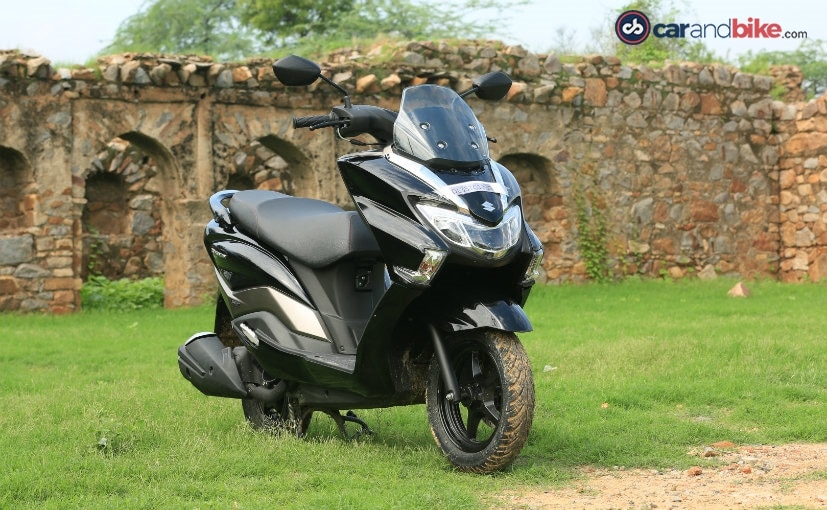 (The Suzuki Burgman Street has solid presence, thanks to its maxi-scooter design)

On the other hand, the TVS NTorq 125 is a handsome and well-proportioned scooter. The NTorq looks sharp and is more pleasing to look at, with better proportions. But it does not have the sheer mass of the Burgman, so it does lose out on street presence if you look at them side by side. Beauty is subjective, but in our eyes, it's the TVS NTorq 125 which is more pleasing to look at and looks quite nicely built as well. The NTorq too has a comfortable riding position but feels a little cramped at the footboard, which is not the biggest among scooters sold in India.

Both scooters are aimed at millennials primarily. And millennials love the idea of more features. This is where the TVS NTorq 125 shines but the Burgman is not too far behind. The NTorq's biggest draw is its 'Smart Connect' system, which allows the rider to use the TVS NTorq app and connect his/her smartphone to the scooter. This allows you to get access to all sorts of information such as call alerts, SMS alerts, navigation assist and also access to three trip meters, lap timer, 0-60 kmph timer, navigation assist, service reminder and the list goes on. Plus, the NTorq also gets a pass-switch, an external fuel filler cap and LED daytime running lamp. One can also opt to fit their NTorq with a USB charger. The only flaw on the NTorq is that you have to take the ignition key out and use it on the side panel to flip the seat open. 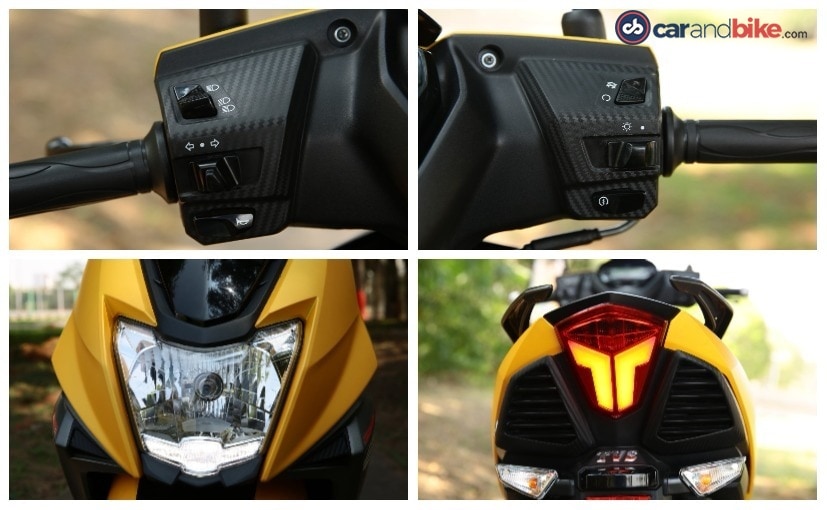 The Burgman Street too gets a long list of features. While it does not have smartphone connectivity, it gets a fully digital instrument console, which the same as the one used on the Gixxer. Additionally, it also has two cubbyholes to keep knickknacks along with a 12V socket on the front. Similar to the NTorq, the Burgman Street too gets an optional USB charger. The Burgman scooter gets an LED headlamp, which the NTorq misses out on. Both scooters have more or less similar underseat storage capacity, but on the Burgman Street you can switch open the seat with the flick of the ignition key, but then to refill also, you have to flip up the seat. 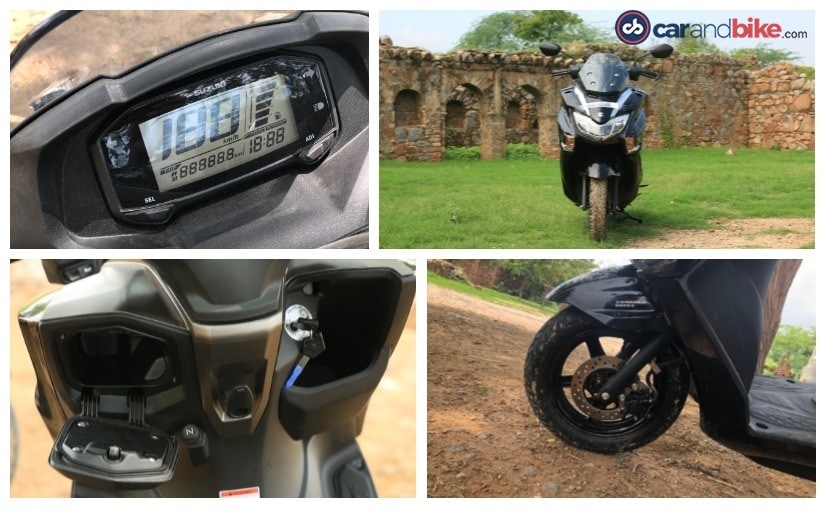 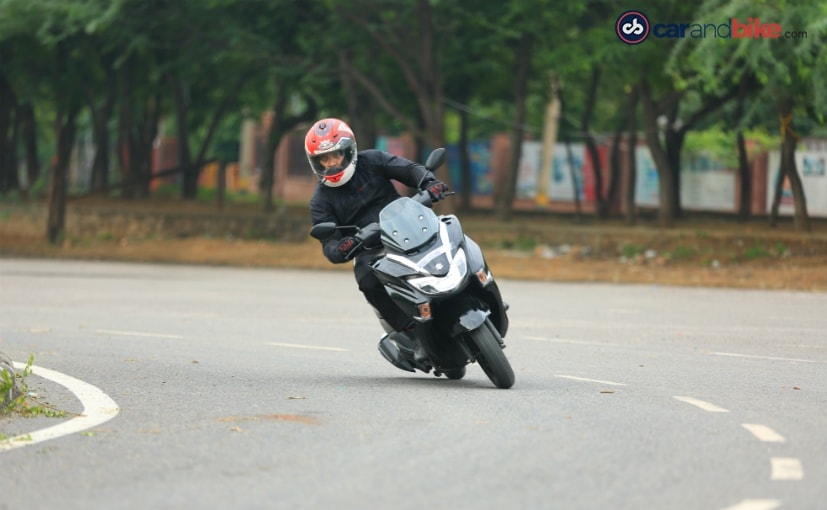 (The Suzuki Burgman Street loves taking corners. It is a nimble handling scooter)

We absolutely love the performance of the NTorq 125 ever since we first rode it at the TVS plant in Hosur. The throttle response is sharp and there no vibrations even at the very top of the rev range. In fact, it is one of the very few scooters in India which can go above 100 kmph and we did see the NTorq touching the three digit mark on multiple occasions. But with the extra weight, the NTorq did lose out to the Burgman Street in outright acceleration. But the NTorq has a much better top end when compared to the Burgman Street. In terms of manoeuvrability, it is the NTorq, which feels easier to handle in traffic. You just feel a bit conscious of the bulk of the Burgman Street when filtering through traffic. 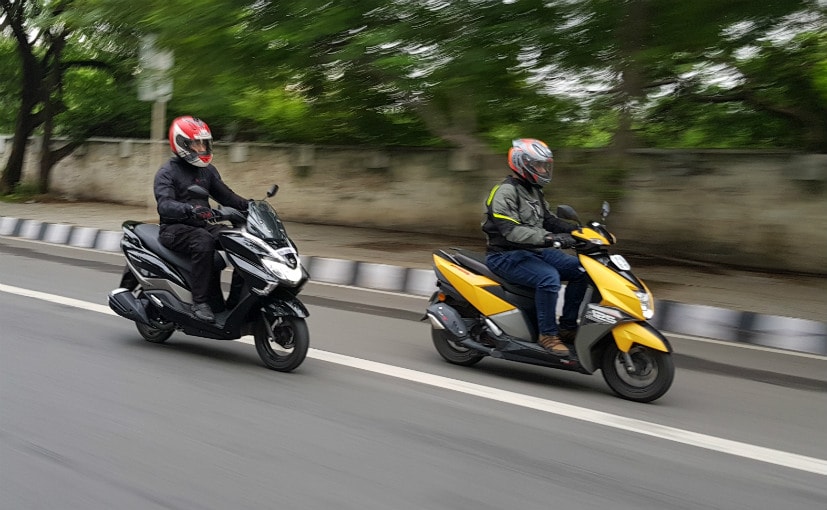 The NTorq offers better ride quality than the Burgman Street. It has the right amount of balance. It takes on potholes and bumps confidently and is eager when showed a corner too. The Burgman Street loves corners; it is easy to dip into a corner and can hold its line too. But the ride quality is slightly stiffer than we would have liked. Definitely not a deal-breaker though. 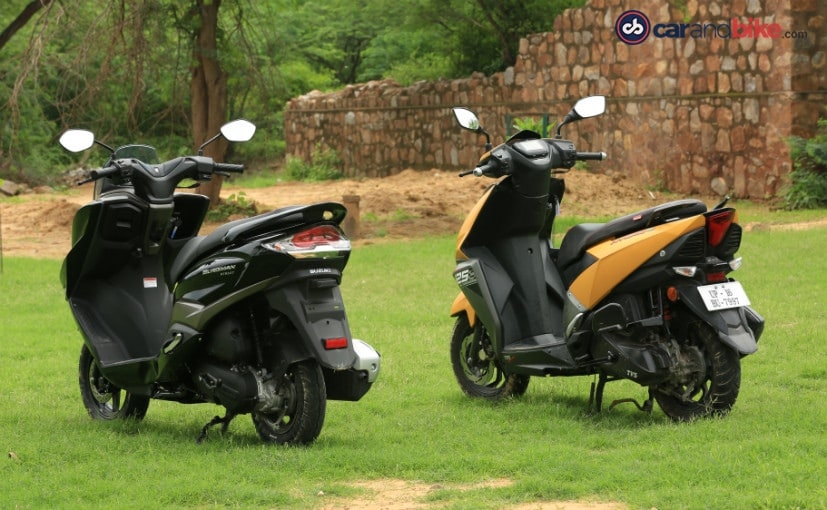 This 125 cc scooter comparison has been rather interesting to say the least. Both scooters are so evenly matched that it is rather difficult to declare a clear winner. But, one of the biggest factors, which a scooter buying customer will look at, is price. The TVS NTorq 125 is ₹ 8,313 cheaper than the Suzuki Burgman Street at ₹ 58,687 and for the price; the NTorq offers a whole lot of value for money. If you want to keep things interesting and are looking for pose value, at ₹ 68,000 the Suzuki Burgman Street is not a bad deal by any stretch of imagination.