After going off shelves for over a year and a half, the Hero Karizma is back on sale with no changes barring a BS-IV compliant engine. 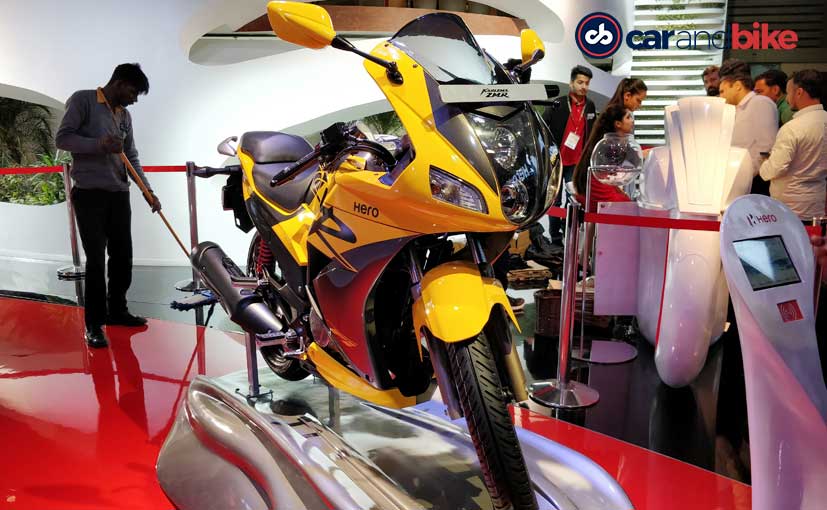 View Photos
The Hero Karizma ZMR at the Auto Expo 2018

After a hiatus of over a year and a half, the Hero Karizma ZMR has been silently re-launched in the country, the company's website reveals. The 2018 Hero Karizma ZMR is available in two variants - standard and dual tone, and is priced at ₹ 1.08 lakh and ₹ 1.10 lakh (ex-showroom, Delhi) respectively. Dealerships too have begun accepting bookings for the 2018 Karizma ZMR, even though the model is yet to reach the outlets for display. The former flagship offering from Hero MotoCorp was pulled off shelves last year after failing to receive the BS-IV update, following slumping sales since its comprehensive revision in 2014.

The Hero Karizma enjoyed a cult following since its launch in 2003 and was one of the most popular offering for motorcycle enthusiasts in the entry-level performance segment. The bike for the longest time remained a close rival to the Bajaj Pulsar 220F in both performance and sales. However, the rising competition and the lack of updates meant the bike couldn't keep up with rivals in terms of sales. To add to that, the updated Karizma introduced in 2014 in collaboration with Hero's then technical partner Erik Buell Racing (EBR), wasn't well received in the market. The oddball styling was far from desirable, which only dropped sales further.

The re-launch of the Hero Karizma ZMR is indeed a surprise move from the manufacturer. Not only is there a lack of demand for the motorcycle amidst new competition; Hero too was thought to have moved away to newer premium commuter motorcycles like the Xtreme 200R and the upcoming Hero XPulse 200. Nevertheless, there sure seem to be loyalists for the Hero offering.

For the 2018 model year, the Hero Karizma ZMR does not get any cosmetic changes. In fact, the model was also showcased at the in the same guise at the Auto Expo 2018. The bike is powered by the same 223 cc single-cylinder, oil-cooled engine with fuel injection that is now BS-IV compliant, and is tuned to produce 20 bhp at 8000 rpm and 19.7 Nm of peak torque at 6500 rpm. The motor is paired with a 5-speed gearbox. Hero claims a top speed of 129 kmph on the Karizma ZMR. Suspension duties are performed by telescopic forks up front and a twin shocks at the rear.

Braking performance comes from disc brakes at either end, while there's still no ABS on offer. The safety feature is offered on the newly launched Xtreme 200R. At its price point, the Karizma ZMR competes with the Bajaj Pulsar RS 200, along with the Suzuki Gixxer SF.