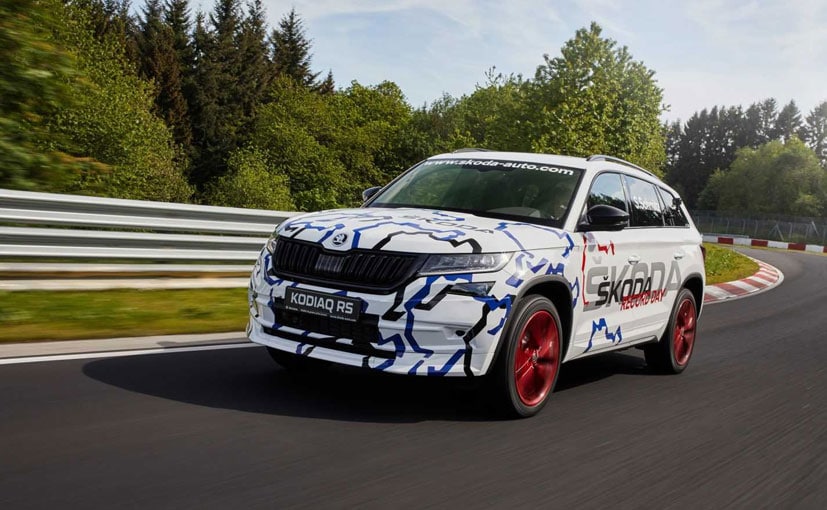 It was only yesterday that we reported Skoda attempting to set a new record at the Nurburgring in the new high performance version of the Kodiaq. Racing driver Sabine Schmitz set the lap record time at 9:29.84 minutes for a seven-seater SUV at the Nurburgring's legendary Nordschleife in the Skoda Kodiaq vRS . Set to debut at the 2018 Paris Motor Show, the design details of the Skoda Kodiaq vRS were camouflaged in white film emblazoned. Moreover, the company has also announced that this will be the same version that will be unveiled to the public in October and then go on sale.

Sabine Schmitz, professional racing driver said, "The car looks sporty and the drive is sporty. I thought a seven-seater would not be so easy to handle, especially on a demanding circuit like the Nordschleife, but I have great feelings about it. It drives well. I'm really impressed. This car is absolutely stock so we didn't change anything. I think that if we break the lap record, it should be in a car that is available for sale. Otherwise it doesn't make any sense. I want to show people how good a car they can buy."

Frantisek Drabek, Head of Compact Models, Skoda Auto said, "The Kodiaq RS equally embodies the versatility and spaciousness of a family SUV as well as emotiveness and dynamism." The Skoda Kodiaq vRS gets the new 2.0 BiTDI engine that produces 236 bhp of max power and around 500Nm of peak torque. The exhaust gases are purified by an SCR catalytic converter and the diesel engine is exclusively reserved for the v ₹ The adaptive Dynamic Chassis Control (DCC) including Driving Mode Select and progressive steering, the all-wheel-drive system equipped the Kodiaq vRS for its record-breaking lap at the Nordschleife.