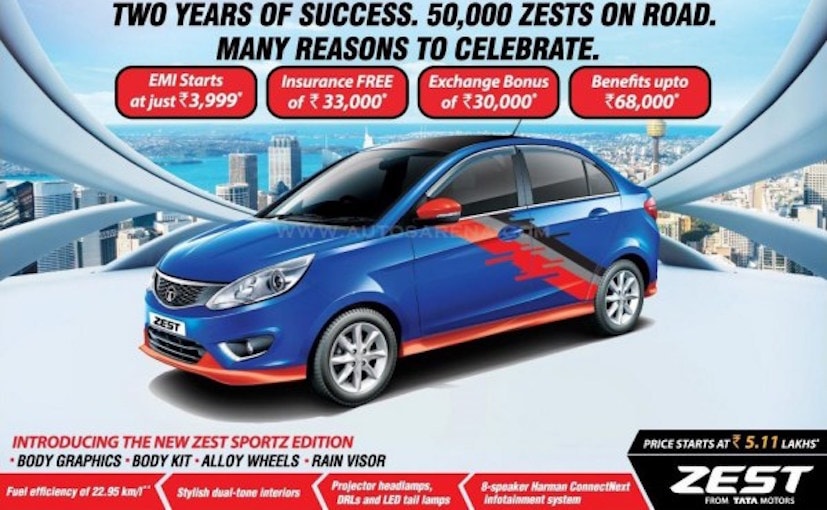 Tata Motors has launched a Zest Sportz Edition, a dealer level accessory package available on the standard car priced at a premium of ₹ 20,000. The limited edition version has been introduced to celebrate the second anniversary and 50,000 Zest sales in the country as per the advertisement and is also being offered with other benefits comprising free insurance of ₹ 33,000, exchange bonus of ₹ 30,000 and other benefits up to ₹ 68,000.

The Tata Zest Sportz Edition accessory package includes a body kit with red skirts, body graphics, blacked-out roof, contrast red finished ORVMs, additional chrome finishing, bumper protectors, door visors and mouldings, while the cabin gets new seat upholstery. The package is available on any variant of the car and can be fitted at the dealership. The alloy wheels though seen in the image are only available on the top variant among certain other features like projector headlamps, LED DRLs and Harman infotainment system.

Available in both petrol and diesel engine options, the Tata Zest uses a 1.2-litre four-cylinder turbocharged Revotron petrol engine tuned to produce 88bhp and 140Nm of torque. Similarly, diesel power comes from the 1.3-litre FIat-sourced Quadrajet that is available in two states of tune - 73bhp and 190 Nm, as well as 88bhp and 200Nm. Transmission options include the 5-speed manual on both engines, while the 88bhp diesel also gets the 5-speed AMT unit.

The Zest was the first product from Tata Motors as part of its revised strategy for new products, but the model hasn't exactly been a game changer despite receiving largely positive reviews. Nevertheless, the sedan has been consistently selling between 1500-2000 units over the past months but does not make the same impact as its rivals the Maruti Suzuki Swift DZire, Hyundai Xcent, Honda Amaze and the likes.

Volkswagen is the latest contender to arrive in the sub-compact sedan segment with the Ameo, which is all set to get a diesel heart and a DSG gearbox this festive season. No wonder then, the Zest and in fact, the Bolt hatchback too are subjected to heavy discounts. Prices for the Tata Zest commence at ₹ 5.11 lakh (ex-showroom, Delhi).