Datsun India's entry-level redi-GO hatchback has got a meagre one star rating for safety from Global NCAP. The car scored low in both adult and child seat protection. The redi-GO has received safety updates in recent days, and the car tested was a model manufactured prior to these updates. 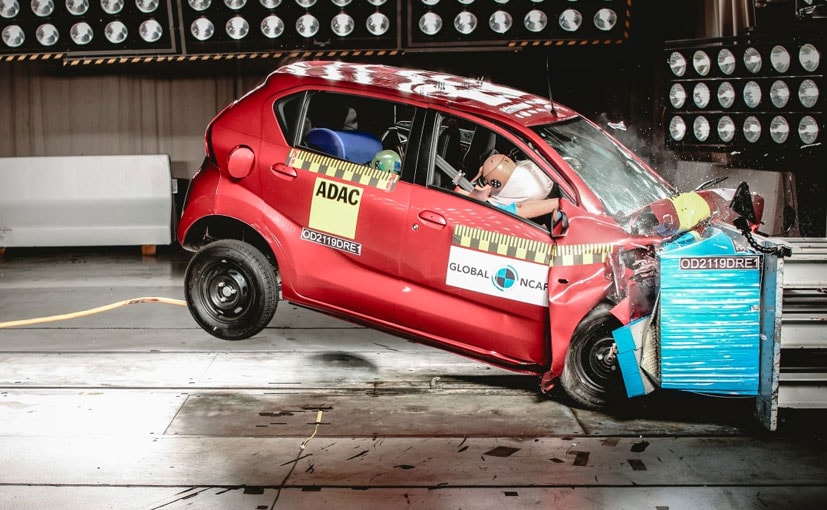 The Datsun redi-GO has scored one star in the latest Global NCAP crash tests of Indian made cars. The 2019 tests saw the redi-GO marginally improve the tally of its sibling - the GO, which had scored zero stars. The redi-GO got 1 star for adult protection, though the score could have been higher had there been better protection for the driver's chest area. On child occupant protection the redi-GO did better with a two star rating. But yet again the score could have been a lot higher had the redi-GO offered rear seatbelts with pre-tensioners and ISOFIX child seat anchors. The redi-GO scored the lowest rating in the latest round of the crash test results, while it was the Maruti Suzuki Ertiga that managed a better safety rating overall with a three-star rating in the latest Global NCAP tests.

Speaking to carandbike, Alejandro Furas, Technical Director, Global NCAP said, "Static 3-point rear seatbelts are unacceptable in 2020. The same is true for having no ISOFIX (child seat anchors). This resulted in head contact for rear passengers in the test."

Datsun India told carandbike, "Safety is the key priority for Datsun. The Datsun redi-GO meets all safety standards and regulations in India and we will continue to invest in the brand towards offering high value and competitiveness." The redi-GO tested was built before May 2019. The car has received some regulation related safety changes in July this year. That would impact its safety score in a positive sense, since features like seat belt reminders and speed limiters have been added as standard.

The Datsun redi-GO uses the same CMF-A platform as the Renault Kwid. The Kwid too had fared poorly at Global NCAP though Renault has been initiating many changes with the car ever since. The recently facelifted version of the Kwid is said to carry several structural changes to enhance crash safety as well. The updated car has as yet not been crash tested, though a test is expected very soon. The redi-GO will likely follow suit, though there is no official confirmation on this at this time. The car is also expected to get rear seatbelts with pretensioners as well in a few months time.